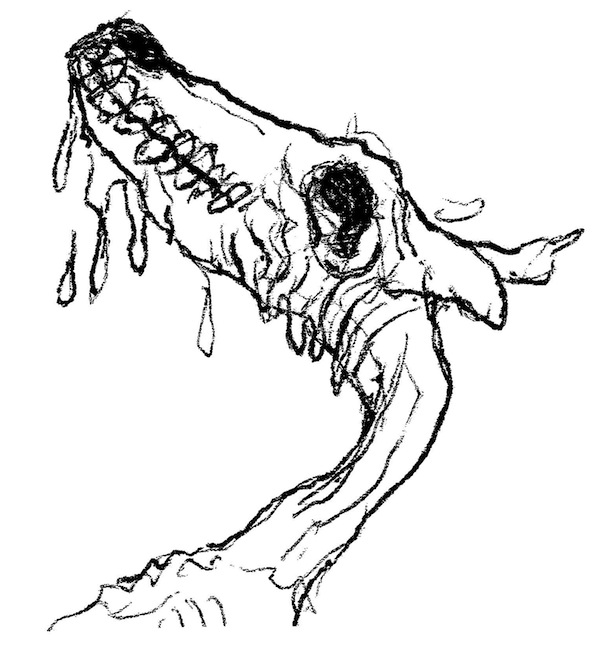 We know more about the undead species who have lived in our hearts and dined on our minds than ever before. We have probed into their weaknesses, evaded their tricks and know well of their canny (and uncanny) chicanery. We know these things … because they were once like us. Let us not rest on our laurels. Let us be vigilant and as ready as we can be for the uneasy future that is Zombie 2.0.

Through Arlene Ang's strong and affecting collection of poems, beginning with We Came Out at Night, we are afforded a glimpse of the humanity squirming beneath the monstrosity. These offer a sharp contrast with Gareth Jenkins's A Void in the Windscreaming, the first of two poems that have the authenticity of a true zombie episode, and might leave one feeling disturbed and genuinely creeped-out. Jane Jervis Read's short story the dam would also make one reconsider late-night skinny-dipping. Perhaps check the doors are locked and all the lights are on before reading these. And make lots of notes.

Being human, we too have stood under bridges (Derek Rawson's She is the cat's mother), been fooled by vegetables (Scott Thouard's Zomku), felt hungover (Duncan Hose's deep in richmond) and toyed with S&M (Life with Mr Darcy by Arlene Ang). We see ourselves in these zombies and yet, understandably, we remain wary of the ever-present threat – that we might become one of the bloody, walking undead.

Let us be thankful that learned minds have exerted their considerable brainpower in the field of Zombie Theory. They have engaged with and examined our shared history with zombies and imagined a world beyond the norm, into that unique state of zombiehood, if you will. You are invited to read Christine Swint's Theories of Zombie Lap Swimmers and Lara Williams's Dead Eroticism and the Zombie Body to learn the ideas underpinning this significant body of work. One should never be too complacent where zombies are concerned.

Zombies are the Best Medicine

While feelings of horror, fear and disgust are not too far away during zombie encounters, it is important to maintain a sense of humour, even in a time of crisis. Witness the squishy comic turns in Zombie Monster Pizza Man by Nigel Holt and Tom Jones would make a good zombie by J. M. Whyte. Of course, Fiona Wright's We Took Their Zombies and Annie Last's Parisier Platz are strong poetry in-joke favourites.

Zombies in Art and Society

There are also the pros and cons to zombies to consider. Imagine how valuable their contributions to society could be, especially in the fields of music, film – tellingly foreshadowed in Esther Johnson's Aargh! It is the zombie apocalypse! Run away! – and importantly, as Sage Leslie-McCarthy considers it in Zombies are People Too, taxation.

And yet it's hard to suppress a tiny shudder when reflecting on the steady gaze of Katerina Sakkas's Ghost Head, or eddy burger's 'Zombie Dog 2.0' …

And who's to say zombies are more harmful than us, in light of our tendency towards wastefulness, destruction and war? Another poem by J. M. Whyte might answer the all-prevailing question on everyone's minds: Are zombies carbon neutral?

Tell the truth. Is there anyone among us who has not felt a quickening of sorrow or sympathy towards their moans and groans, their unremitting hunger to eat our pink, juicy cerebellum? John Davis's poem The Zombie, Rejected By His Human Lover, Responds and Tricia Dearborn's Eat My Secrets would soften many a hard, salty heart towards their plight. Perhaps we may come to realise our own better selves when we learn to love the undead.

This Cordite edition of all things zombie concludes with Gregory Horne's From Mrs Saville, England, a poem that points its thin and bony finger at a well-known proto-zombie, which might serve as a warning that a zombie might have been picking our brains much earlier than we thought.

Let this be a lesson. For it is in looking over our shoulders to the past that such a backward glance can better serve our shared, inevitable futures with zombiessssss.

This entry was posted in ESSAYS and tagged humour, Ivy Alvarez, theory, undead, zombies. Bookmark the permalink.
Ivy Alvarez is the author of The Everyday English Dictionary (London: Paekakariki Press, 2016), Hollywood Starlet (Chicago: dancing girl press), Disturbance (Wales: Seren, 2013) and Mortal. A three-time Pushcart Prize nominee, her work appears in many publications, including Best Australian Poems (2009 and 2013), with several poems translated into Russian, Spanish, Japanese and Korean. Born in Manila and raised in Tasmania, she lived many years in Wales before moving to New Zealand in 2014.