A Fortnight of Poetry in Seoul

(or, Someone’s Always Falling in Love with Korea and Doesn’t Want to Leave)

I am at the boarding gate of Incheon Airport, waiting for my flight to be called and for my return journey to begin. I am wearing large sunglasses, not because it’s particularly bright, but to mask escaping tears. The man sitting across from me happens to look up from the lurid covers of his Dennis Lehane book after I’ve been repeatedly dabbing at my face with a hankie. He seems a bit nonplussed.

Hovering above myself, the objective part of my brain is also bemused at my reaction. Really, what has happened in the two weeks in Korea to engender this ludicrous display?

When I arrived at the airport on 14 May 2011, I had no indication this was how it was going to play out. Uppermost in my mind was getting to my final destination, the Yeonhui Seoul Art Space/Writers’ Village. After meeting up with Asialink’s Nicolas Low, poet Dan Disney guided us towards a swift and spotless train into Seoul. We passed landscapes that evoked other places I’ve seen before: English countryside, industrial smokestacks, that section of track on the way from Sydney to Newcastle. Most of the time though, the view out the window was absolutely unfamiliar.

Jetlag wreaked havoc with my perception. Already I had almost lost my passport and the taxi’s seatbelt presented me with some difficulty. The pretty neon lights flickering past the car windows were turning quite psychedelic. Once we’d reached the Writer’s Village, we were greeted by Choi Jae-Sung who accompanied us for dinner at a nearby Korean barbecue place.

The ritual of Korean barbecue was a revelation. We sat cross-legged at a low table around a hubcap-sized hotplate as a cascade of side dishes came out from the kitchen, even before we’d given our order which, once it arrived, came to represent the embrace of conviviality I would feel throughout my stay in the coming weeks. Jae-Sung and Dan alternated turning over the meat, mushrooms, onions, kim chi and garlic as it cooked. Once it was ready, we helped ourselves. I learnt about pouring a drink for the eldest person at the table with both hands to show respect, and a couple of useful Korean phrases. Replete with food, when I finally turned in for the night, I felt distinctly more human.

Poet Terry Jaensch and Cordite’s David Prater arrived a couple of evenings later and we all trooped off to Hongdae to wander, ogle the urban nightlife and have more Korean barbecue, after which we toasted David’s speech welcoming us all to this new adventure with our soju-filled glasses. Due to staggered arrival dates, all five of the tour’s principal characters would finally come together three days after that first day at a rather impressive dinner, when the last of our company, poet Barry Hill, arrived just in time from the airport to sample some delightful dishes. The only things I remember were the tasty seafood, trying the seaweed soup and drinking some delicious makgeolli, a Korean rice wine.

The ensuing days would have been a blur had I not been taking pictures, documenting as much as possible. Even with the evidence, it’s hard to believe how much our programme managed to pack in and, due to the vagaries of the schedule, leave out. When time becomes a scarce commodity, some things have to fall away. The production and launch of a chapbook, a reading at Sogang University, and a more extended collaboration with the Yi Sang House project were among such casualties.

After the lull of arrival and settling-in came a whirl of names and name-cards. Armed with my two Korean phrases (annyoung ha seo for hello, kamsahamnida for thank you), I would shake hands, introduce myself and smile at up to five new people a day over the coming weeks. I don’t usually meet that many people in a month.

That most of the people I met had non-Western names just added to my near-constant state of confusion. Thank goodness they handed out their cards quite readily, otherwise I’d have been lost. This practice of exchanging cards would actually come to form the basis of our collaborative project with the independent (i.e. non-government-funded) publisher SAII. 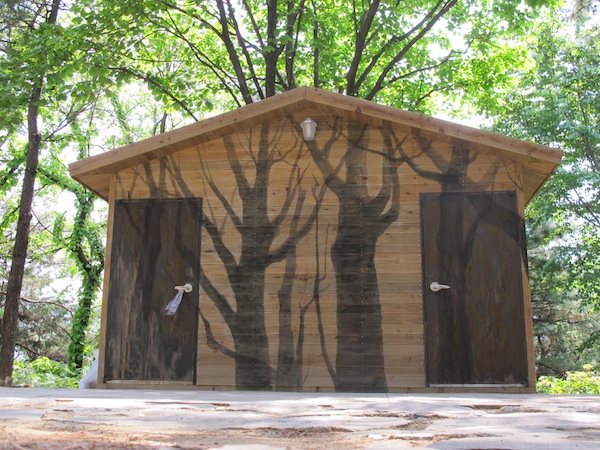 Our official engagements had included a seminar in the Writers’ Village library, where we met our Korean poet counterparts (as detailed by David Prater in his piece). I was deeply impressed by the Korean poetry read to me during this event. There was the reading at Ewha Women’s University, where all three Australian poets shared their work and answered questions from the audience of students and faculty; the Seoul Literature conference, where Terry Jaensch delivered his paper; and the conference’s closing night party held at the Writers’ Village, where I shared the stage with acclaimed novelist Ben Okri, British ex-poet laureate Sir Andrew Motion and Nobel Prize-winner Jean-Marie Gustave Le Clézio.

This last event felt more than slightly surreal to me because I hadn’t known who else would be on the programme until about an hour beforehand. I’d heard of Sir Andrew, who was already poet laureate for five years when I arrived in Wales, and I remembered working bookstores in Hobart and Dublin and shelving Ben Okri’s The Famished Road — but I’d never met a Nobel Prize winner before that evening. My ignorance was a good thing because otherwise I would have been too awestruck.

People kept inviting us out for lunch and dinner almost every day, and we tried everything from barbecue and bibimbap to Korean fine dining. I remember, with particular fondness, the lunch hosted by the Korean Literature Translation Institute, when I sat between the poets Kim Ki-Taek and Hwang Tong-gyu, as I plied them with questions about gender equality, after one of the poets had commented how my poems did not have “feminist rage”. (I told him that he hadn’t read all my work.) I even fell in love with sujeonggwa, a cinnamon and ginger dessert tea, which I now know how to make after befriending my interpreter Kim Min Jung, who helped track down a recipe for me.

While I felt grateful for the attention and respect extended towards poetry and writing, I must admit I needed space to retreat and recoup my energy. Often it felt like there wasn’t enough time to process everything, especially things I found hard to take, such as touring the demilitarised zone. I treasured the times I had to exhale and let Seoul’s abundant aesthetic beauty soothe me. I found, for instance, that sitting by the conversation nook at the Writers’ Village, as the rain fell among the pine trees and the cuckoo bird sounded, very calming.

With so much going on, it was sometimes difficult to remember I was there in service of poetry.

I came to savour the hours when we weren’t on show and didn’t have to be on our best behaviour, those simple moments between engagements when we’d be travelling by taxi, subway or bus, in transit and just enjoying each other’s company. Mosquito-bitten, soju-drenched evenings, when we talked about poetry and love and relationships, or listening to bizarre, improvised songs voiced by a Star Wars character, which would send me off into giggle fits, incapacitating me from further conversation.

The official and unofficial spheres overlapped in a very pleasing fashion during our collaborative project with SAII. After showing us the shadow sides of Seoul over several days — which included a stroll past a red-light district and a visit to a shaman who foretold my future — and with deadlines looming, we had to decide how best to present our work. One quick brainstorm later and we had all agreed that, as a showcase for the poets’ response poems and the designers’ creativity, the name card was a portable and personal vehicle for expression. Perfect. How satisfying it was when we finally shared our cards on the final night. I found the audience’s response very gratifying, with many of our limited edition cards snapped up instantly.

It is hard to do justice to all that I had experienced in Seoul. Every day felt like a normal fortnight back in the real world. I wish that time could have elongated it further still — make it three weeks, a month.

It’s been over four weeks since I was at that airport, trying to compose myself, heartbroken over having to leave my friends, and the strange and wonderful time we had. Since I’ve been back, I’ve been trying to figure out how to return. Next time, I’ll be ready. I have started taking lessons. Jogeum hangug-eoleul ihaehabnida. I understand some Korean.

This entry was posted in ESSAYS and tagged Ivy Alvarez, Ozko Features, seoul. Bookmark the permalink.

Ivy Alvarez is the author of The Everyday English Dictionary (London: Paekakariki Press, 2016), Hollywood Starlet (Chicago: dancing girl press), Disturbance (Wales: Seren, 2013) and Mortal. A three-time Pushcart Prize nominee, her work appears in many publications, including Best Australian Poems (2009 and 2013), with several poems translated into Russian, Spanish, Japanese and Korean. Born in Manila and raised in Tasmania, she lived many years in Wales before moving to New Zealand in 2014.

View all posts by Ivy Alvarez on Cordite →