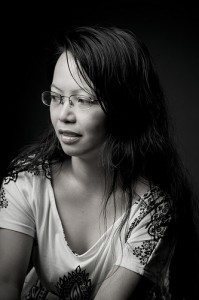 Ivy Alvarez is the author of Mortal (Red Morning Press, 2006). Her poems feature in anthologies, journals and new media in many countries, including Best Australian Poems 2009, and have been translated into Russian, Spanish, Japanese and Korean. In May 2011, she was invited to give readings in Seoul, Korea, as part of Cordite’s Oz-Ko Poetry Tour. A recipient of several awards and prizes, she has received funding towards the writing of her second book of poems from the Australia Council of the Arts and from Literature Wales. Previous writing residencies include MacDowell Colony (USA), Hawthornden Castle (Scotland), Fundación Valparaiso (Spain) and Booranga Writers Centre (Australia).A visiting lecturer in Creative Writing at the University of Chester in 2010, she is the series editor of A Slice of Cherry Pie and We Don’t Stop Here, poetry chapbook anthologies inspired by David Lynch’s cult TV show, Twin Peaks, and his film, Mulholland Drive. She also writes reviews and articles, and has guest-edited for Cordite and qarrtsiluni. Born in the Philippines, Ivy Alvarez grew up in Tasmania, Australia. She acquired British citizenship in 2010, having arrived in Wales in 2004.

Previously, I have worked stints in retail (bookseller), features writer for a commercial magazine, researcher for a university professor and administrator/grant writer for a dance company. My recent work as a visiting lecturer in creative writing (University of Chester) feels like the closest intersection of my poetry life and the academic life I once thought would be my path. As a freelancer nowadays, work can vary from delivering poetry and writing workshops, to poetry readings all over the UK. In the current climate, this practice is getting harder to continue, so I am again beginning the quest to find other sources of steady income.

Writing is the lens I polish again and again to see the world. When I’m lucky enough, I can trace the line from thought to hand, easily, and the words appear on the page, needing hardly any editing. Most of the time, however, my drafts do require editing, which is the part that might be considered hard work. Though even this has its pleasures.

I don’t really time myself when I write a poem. I would guess, if I have all my ideas and triggers set up, I can draft a poem in about half an hour, type it up and finish it (or close enough) in another half hour. When I work on a formal poem, it can take me days. A long poem can take months. Almost finished poems can beckon me to complete them years later.

I’m between thematic obsessions at the moment, although I have been consistently interested in writing about or around the relationships between people.

I used to favour paying publications until I realised they were working with honorarium amounts. With print publications, receiving a contributor’s copy as payment is always nice. A journal (print or online) that showcases writing beautifully and thoughtfully is my prime consideration now.

I think it may have been AUD$5, back in the 90s. What would that be worth now, I wonder? I don’t think I even cashed the cheque. It’s probably somewhere among my papers, in storage.

I’m most comfortable writing on a bed (or, failing that, a sofa), in a well-lit room, with a window from which to gaze.

A poem is worth three meals a day, a bed, a desk and chair, and a roof, for a month — which is a steal, really, since it does not take into account the books read for study and research and absorption, the hours daydreamed (the chores completed) or the conversations gathered in the years previous to the writing of the poem.

I have served as editor for my university magazine, reviews editor for Cordite, guest editor for qarrtsiluni and APWN, and series editor for The Private Press (a micro-publisher of poetry).

A good journal issue (or publication) is when everything comes together, it is as error-free as possible and the work selected gets people talking and engaged with the writing. The editor’s work is necessarily invisible. Any recognition for this work usually comes after the job is done, she has moved on and readers can have the incoming editor’s work for comparison.

I say ‘writer’ if I want to continue the conversation. The querent will then usually ask, ‘What do you write?’ to which I can respond, ‘I write poetry.’ The thought of calling myself poet makes me squirm. ‘Writer’ feels the most apt whereas ‘poet’ makes me feel like… I don’t know… like I’m trying to rise above my station. For me, it’s an honorific title.

I wanted to be a movie star. I was very shy, though, and really, I was happiest reading and writing. I just wanted to be near books as much as possible. Not much has changed.

Ivy Alvarez’ ‘Curing the animal’, first published in Cordite 29: Pastoral (2008), has now been republished as part of the Cordite / Prairie Schooner ‘Work’ feature.

This entry was posted in GUNCOTTON and tagged Ivy Alvarez. Bookmark the permalink.