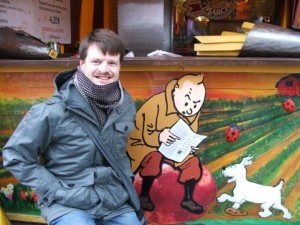 Since 2006, Tom Clark has been an academic in the School of Communication and the Arts at Victoria University, Melbourne, where he teaches and researches in political rhetoric as a family of performance poetry. Previously he completed a PhD, writing his thesis on irony in Beowulf, which Peter Lang (Bern) published in 2003. He works intermittently as a political speechwriter. He has a prose book on poetry and truthfulness in political speech due out in April 2012. ‘Why be a delegate?’ will be included in an anthology of his political poems, also due for publication in 2012.

Leave home at 8.00. Catch tram into city. Delete unwanted emails on iphone. Catch train from city to my campus. Delete more unwanted emails on ipad. Read up on all the urgent things before arriving at work. Trip takes 65-75 minutes from door to door. Arrive in office. Try to get writing done, whether that is creative or scholarly, but in fact spend most of the day responding to queries from students and colleagues. Teach a class somewhere in there. Take a half-hour lunch break somewhere in there. Make espresso for favoured visitors on my electric Bialetti. Typically afternoons are taken up with a couple of formal meetings. When they’re over, typically between 5 and 6, pack up and read on my way home. Delete more unwanted emails on ipad.

Yes. Both because I do it for work (i.e. my university encourages me to write) and because I work at it. When the poems are just OK, I would call them workmanlike, or trying hard. When they’re really working, I find more idealistic epithets.

Drafting can be quick – maybe as little as thirty minutes for an 8-line lyric – but revision typically takes 10-20 times as long, and spreads out over several years.

Often it is, especially the politics of the workplace. I love the banality of work language and trade union activism as a vehicle for poetic transcendence.

I have the luxury of a salary for writing and teaching, so I don’t feel driven to sell it — nor do I want to judge others for whom the money is less discretionary. If poets really want dough, though, they should write for advertising. Plenty of scope for versification there!

$10.00, several times, paid by the University of Sydney Union.

Varied. Often I write in an aeroplane, working in the back of the boarding pass, before I type it up at home or in the office. Longer pieces need the dependability of uninterrupted time, but travel is often good for that too. Revision is typically done by iPad on the train to or from work.

I have edited a few publications at the less professional end of the scale. It was great for the discarding skills. Editing gives you a very keen sense of the difference between people who actively read poetry and those who just write it.

No. I am an academic, so that’s what I say — but I’m really glad to be in a job that recognises and supports creative work.

Tom Clark’s ‘Why be a delegate?’, first published in Cordite 26: Innocence (2007), has now been republished as part of the Cordite / Prairie Schooner ‘Work’ feature.

This entry was posted in GUNCOTTON and tagged Tom Clark, work. Bookmark the permalink.