An interview with Benito Di Fonzo 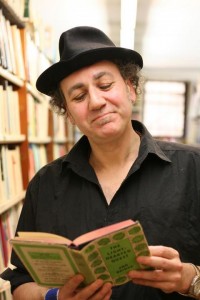 Born into an Irish-Italian working class family in Sydney’s inner west, journalist, playwright, poet and performer Benito Di Fonzo has written for, and been profiled by, the best and worst of publications including The Sydney Morning Herald, The Sun Herald, The Australian, CNN, and Bardfly Magazine (where he was editor). Benito has performed his narrative neo-beat poems and spoken word in London, Edinburgh, Sydney, Melbourne, Rome, Adelaide, Perth and Indonesia. As well as writing radio serials and plays for 2SER and 2FBI he has had two plays broadcast live from The Sydney Opera House. He has also performed on ABC 702 & Radio National, 3RRR (Melbourne) and Resonance FM (UK) amongst others. In 2005 Independence Jones Guerrilla Press published Benito’s free-verse novel Her, Leaving, As the Acid Hits to positive reviews. Benito’s 2010 stage-play “The Chronic Ills of Robert Zimmerman, AKA Bob Dylan (A Lie)” was a hit of Adelaide Fringe before several sold-out seasons in Sydney and a litany of glowing reviews, resulting in the show being awarded the 2010 BITE (Best of Independent Theatre) award. It is still touring Australia. Benito’s second Fonzo Journalistic show, “Lenny Bruce: 13 Daze Un-Dug in Sydney” will premiere at Darlinghurst Theatre in November 2012. Benito holds degrees in Literature and Creative Writing from The University of Western Sydney. In 2001 he was awarded the Inner City Life Literary Award by The NSW Writers’ Centre. His favourite colour is irrelevant.

Waking in the middle of the night I begin what Les Murray famously called ‘The 4am Show’ in which I lay and sleeplessly panic about my career as a writer and where it is and isn’t going and why such-and-such an editor seems to suddenly hate me so. I can’t sleep now so I will read Lao Tzu or Somerset Maugham till dawn, when I will promptly fall asleep.

Rising again I will suffer Capitalist Guilt that I should have been up and writing hours ago so, after ablutions, cold leftovers, and much Bushells Australian Breakfast Tea, it’s to my writerly cockpit where I will ignore the vampires of Stalkbook and warm up by tweeting a quick western haiku or tanka waka as ‘Jack Kerowank’.

Now I work at whatever is my current article, poem, story, or play until lunch. After lunch I may wander the streets somewhat, then read some more, play guitar, or just worry about all those unpaid invoices.

It’s here I may have to suffer at some day job for a few hours. If I’m not working I may have to review a play to for 2SER-FM (where I co-host ‘Stages’ each Saturday morning) or I go busking – playing drums on King Street, Newtown to John Maddox’s dobro bass and Tug Dumbly’s guitar. Untypically this coming January 2012 I may be playing a live guitar score in my Short & Sweet Festival spoof “One Day In The Life of Keef: The Human Riff” at Newtown Theatre.

Eventually old Mr Moon will raise his watery head over the early hours and I will fall in a stupor in my garret next to Eveleigh Railyards, just waiting for my stage-call for the 4am Show, and some Somerset mourning…

Yes and no. I mean, ‘work’ means slaving away in the factory that towered over my street as a kid. Being an artist of any kind is a flukish gift. So it’s work, but it’s not work in that ‘work’ to me is associated with something you don’t want to do, dig?

Anywhere from a fifteen minute scribble in a notebook, to weeks going over and over it. There’s no rule – it’s not like baking a cake or manufacturing amphetamines.

It does come up, particularly in my earlier work. I think I suffered a sense of what I called ‘capitalist guilt’ for a time, it’s like catholic guilt but related to work instead of sex. Basically I felt guilty I wasn’t stuck in the factory at the top of my childhood street like my dad had to be.

It should be exchanged for paid publication.

I’ve either been paid nothing or paid between $50 and $100. There doesn’t seem to be anything in between. Readings on the other hand can range from $250 to a beer.

Usually my flat by Eveleigh railyards (the steam-train shed to be precise.) Although the seed of some of my best poems happened in some pub or party, or at least I think it did, and was jotted down in a notepad.

Whatever my rent is that week.

I have, and it is humbling to have to look at a poem from a more critical point of view. It’s much like being a reviewer, which I’ve also been. Suddenly you empathise with all those folk you swore at over your mailbox or news-agency.

My business card says “Writer Extraordinaire,” whatever that means…

It was more what I didn’t want to do, i.e. a proper job, like at the factory at the top of the street. Discovering that there were people who actually made a living (of sorts) as artists, writers, and musicians was quite a joyous adolescent epiphany.

Benito Di Fonzo’s ‘What For? (Epic Triad Version)’, first published in Cordite 31: Epic (2009), has now been republished as part of the Cordite / Prairie Schooner ‘Work’ feature.

This entry was posted in BLOG ARCHIVES and tagged Benito di Fonzo, work. Bookmark the permalink.