An interview with M. F. McAuliffe 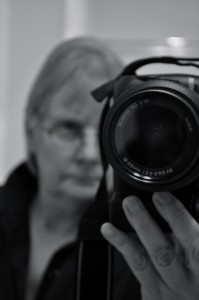 M. F. McAuliffe was born and educated in Adelaide and Melbourne, and holds an Honours degree in English and some graduate stuff in photography and anthropology. She has taught technical writing, media analysis and basic TV production to engineering and applied science students, Business English to business students, and Film Study to high school students. Since moving to the U.S. in 1982, she has worked as a political pollster, technical editor and crypto-librarian. She made her US publishing debut in Damon Knight’s Clarion Awards, published fiction and verse in The Adelaide Review, Overland, Australian Short Stories, Cordite, WORK Magazine, and in Tema and Poezija (Zagreb).

And then I: let myself in through the security-door, write the daily and weekly work-schedules, unsnarl the printer and the Word docs and the resumes and the term-papers; process new books, de-process the old, make lists of books to order; answer the phone, help download ebooks, lend laptops, process returned laptops; answer the phone, unsnarl the printer, direct people to the programs, sign people up for classes; sign for deliveries of federal tax-forms and store them for the New Year; unsnarl the printer; see everything’s secure, alarm the door on my way out.

The 11-mile commute: home ahead of me, away, warmth, food; the great white triangle of Mt. Hood behind me, an unbelievable snow-cone in a small, ovoid, oblong mirror; ahead of me, beside me, behind me, the long, out flat to both horizons, the trafficless, tempting, pseudo-asphalt of the river.

At the beginning it is a rush & a joy. when the inspiration runs out, or when it falls apart and I have to make a complete thing of it, then it’s work. Painstaking. I don’t want the seams to show, or the several tectonic plates of “first” and “patching up” to be discernibly different in cogency & intensity.

That depends very much on who’s not paying me. Local anthologies of spoken word, financed by a couple of the better-off poets – fine. Croatian magazines devoted to poetry/ photography/ literature – fine; it’s a poor country and the writing there’s so good I’m just happy to be included. If I am publishing something myself, I do it to make money. I make very little, but still feel as though I’ve successfully laid seige to some stronghold as I count the dimes.

I can’t remember. There are so few paying outlets I think the only time I am paid is when an Arts Council funded Australian publication takes something. I sell my own mini-chapbooks for $2 – they usually contain about 7 poems. (Orpheus is $3. It’s long.)

Usually my office. (A narrow room downstairs, somewhat under the stairs. I have a very long desk which leaves me free to lay out a short book of photographs, for example, or the Xmas-cards in varying states of completion, or lists, bank-statements, or longer-term projects at the other end. I work at the window end. I’ve set up the room to face east (the blank wall), but the light comes from the window, the north, the river.

Sometimes I write in my head, driving to work. Sometimes in my head, sleeping – I find myself having written long pieces of prose or shaped entire novels in a particular contemporary style. The prose fades on waking. I suspect I’m testing modes, doing asleep what I don’t have time to do when I’m awake. Or perhaps they are things I will never follow up because of some other limitation.

Sometimes I have written things at work, a couple of lines scribbled to be worked on or out, later. During the mid-late ’90s I wrote a lot of very short poems at work & hid them in my pocket. We worked in a big open room, at desks which could be seen & scanned from the supervisor’s office (it really was supervision). So the things I wrote then fitted onto 3″ x 5″ pieces of scratch paper.

Over the last few years I haven’t written much. I will be able to concentrate on writing in 2012, as older projects move to press. I might take the computer & stuff upstairs in the early mornings. My office is getting to be too cold in winter.

Depends on the poem. Don Juan made Byron’s fortune, but Byron was a genius. I like the current payment structure of Cordite, for example – the money is enough to make your work feel valued, without being too onerous for the Council. With small or very small, truly independent presses, I think the principle of payment should be the widow’s mite.

I have done a lot of editing over the last 10 years. Again, that experience varies. I’ll never forget the day Venus Khoury-Ghata’s Words arrived at the Gobshite Quarterly office, as a mailed fax from Marilyn Hacker. It was a delirious experience – they were so good and so far outside the realm of English poetry; it felt like a life-changing moment.

The next best Gobshite Quarterly experience was getting “Sirens,” a short story by Frederic Raphael that wouldn’t place in England. It’s a great story. I couldn’t believe it’d been good luck with placing it elsewhere’d.

The 3rd experience I will always remember was getting an email from Palestine (long after we’d given up hope), giving us permission to reprint some of Mahmoud Darwish’s poems. (Typesetting the Arabic was an adventure – it was eventually done by one of the partners in a local printing business, who’d studied Arabic and been to Syria for a year as a Fulbright scholar. As we didn’t have the right font at the time we turned the page into a jpg and InDesigned it that way.)

Marilyn Hacker also brought us the French poet Marie Etienne; on a visit to Portland Julienne Eden-Busic chanced to see us mentioned in The Oregonian, and brought us a treasure-trove of new Croatian Slovenian and Bosnian poets – Tomica Bajsic, Barbara Korun, Dubravka Oraic-Tolic, and Ferida Durakovic, as well as prose-writers Edo Popovic and Gordan Nuhanovic; from a copy of Gobshite found in an Algerian café we got Algerian poet Amari Hamadene. & last but not least, Les Murray sent us a batch of pre-publication copies from Poems the Size of Photographs.

In 2007 I co-edited Broken Word: The Alberta Street Anthology Volume Two, which was a very small publication co-financed by two or three people. The open mic at the Alberta Street Pub was uncommonly good; arlo Voorhees, the MC, was that rarest of creatures, a catalyst, as well as a lively and tolerant host. So over the course of 2 years or so the reading just kept getting better; community radio exposure attracted people from southern Washington as well as the Greater Portland area. Volume Two contained at least one poem by each of the regulars, 50 poets in all. Editing that meant taking the best from each person and carefully orchestrating the flow of the whole. Colours and shades of language were very important there.

Broken Word 2 was a very different kind of publication from Gobshite in that everyone who read more than once (& who responded to the call for submissons) had to be represented. BW2 was a showcase and a commemoration; it was an inspiration to local writers; it completely outsold everything in the small-press poetry section at Powell’s that year – partly because it was local, and partly because so much of the work in it was good. The editorial committee was composed of 6 of the people who’d read consistently at the pub, and whose work qualified them to examine & yea or nay others’ work. The photographer on the Committee also discovered he was a good book designer.

The other end of the editing scale – submissions to Gobshite which need, well, editing. If R. V. Branham (the founder & editor of Gobshite Quarterly) is swamped with other work or in two minds about a particular poem, he will hand the matter over to me. If I’m lucky it’ll be a matter of picking one from a bunch – I look for completeness of thought, internal consistency of tone and mood in the poem itself, and whether I feel as though I’ve felt or seen something new, something I didn’t know, or hadn’t thought of before, by the time I’ve finished reading. I remember once I suggested that the writer cut one word from the last line of a longish poem. My reason was rhythm, and the fact that it was unnecessary to the meaning and its very lack of necessity pulled the reader out of the poem. He declined, and so did we. But we did publish another of his submissions.

The worst-case scenario, and the one I really dread because it is so fraught with consequent email, occurs when something is submitted and the submitter asks for editing. This almost never ends well; the submitter hates the cuts or the title and storms off in a huff, electonically speaking, having wasted everybody’s time… This happens very rarely, but I doubt we will accept anything on that basis again, simply because it does waste our time… But this is why having extra material on hand and being able to plug a sudden gap is one of the most basic survival techniques an editor must have.

No, I never do. I reply “I work at [XXX]” the name of the org that signs my paycheques. Saying “I’m a poet” seems odd to me, because it’s not something people will generally find useful, or even immediately graspable, such as being a plumber or dentist or lawyer or carpenter or nurse or even a policeman, fireman, actor, singer, songwriter. We are the very unacknowledged legislators of very little – though good poetry can still cut through the asphalt of conventional thought, mood, perception, dullness like nothing else, like mental and spiritual lightning. Rock/pop songwriters occupy the spot Byron and Keats used to, shaping the sensibilities of their time. But then, written poetry was an always abstraction from song. Technology has simply let song take its old place back.

I didn’t know, but I always felt a quick, hot jolt of awe and longing (and the furtive, secret shame of incomprehension) whenever we visited our distant cousins the Dutkiewicz family, who spearheaded the Modernist movement in Australian painting and sculpture. When I lived in Australia I always knew a disproportionately large number of painters.

So I suppose I really wanted to be an artist.

This entry was posted in BLOG ARCHIVES and tagged M. F. McAuliffe, work. Bookmark the permalink.