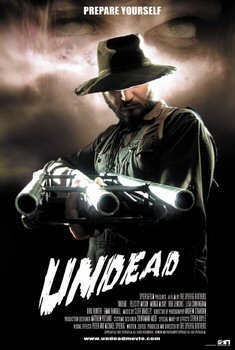 We all know this story. Locals in a small country town notice unannounced meteors plummeting to earth and then, suddenly, half the townsfolk are the living dead, and then a group of arguing outcasts are forced to band together against all odds, and then some more stuff happens and there's heaps of blood… and so on. Welcome to Undead, the debut feature flick from two Brisbane lads, Peter and Michael Spierig. Shot on a real low budget, the boys sold their cars and other worldly possessions to see their dream of real Aussie zombie terror on the big screen.

Beyond this typical set-up, the movie toys with what are easy cliches. Whereas you can usually spot the folk who will get knocked off &#151 and in what order, the Spierigs' inventive script confounds expectations. And I still don't know how. I think because it's so exceedingly funny. You even have the predictable, seemingly abandoned house in the middle of the country where, coincidentally, the band of misfit heroes end up meetin' and freakin' out. For some reason, all leave their perfectly good, fast cars on the road in the middle of nowhere.

Yet I could forgive even this because I wanted them in that house, just to see what the Spierigs ended up doing with the cliches. It's all old, but it suddenly felt so fresh because this time, they juggled and smothered it with Australian humour, a huge gooey muchness of well-placed blood, with a nicely (if only slightly) disjointed use of typical film narrative.

Then, there is this, what I think is a distinct statement, worth the film's admission price alone: 'They sure kill some poor fucks in some really fucked-up ways. Yes, sir.'

Anyway, what the Brothers Spierigs give us is exactly what we got (and loved) with Peter Jackson's Bad Taste. In fact, Undead is even technically a notch up from Jackson's work. I guess this Spierig/Jackson comparison is inevitable. How could it not be, if you've make a super-solid and funny zombie flick in these great Southern parts of the world? The main point is that Undead accesses current computer technology, whereas Bad Taste relied on old cut-n-paste styling, which film nowadays seems to lack so desperately (please, kill the Matrix. Kill it now).

Yet Undead also indulges in its own share of in-camera effects and neat-o camera work. After all, despite the computer-generated stuff, this is a low-budget flick. How they created such passable CG work is a miracle to behold.

And then, there's the blood. Oh, the blood. It is like sweet, heavenly treacle, thick, tangible and everywhere. The scene in the supermarket with the broomstick and rotary saw is sure to stir patriotism in even the most self-loathing Australian. Tears, I tells ya.

There is also a bit of homage going on, or so it seems. Like the drowned-out moans of 'brains' and 'join us', mumbled amid the real groans and music. You also feel a bit of John Woo in the slo-mo action gun-fighting and ridiculous scenarios the mysterious sharpshooter Marion (Mungo McKay) embarks upon. The music harkens to John Williams' crescendo work. It's all very filmic. The Brothers clearly love a range of genres, not just horror, adding to the overall quality of the film.

Here, an outrageous statement: these Spierig Boys are going to be HUGE!. And I mean big, as in God's-undies-big. With what they've done here, they are sure to be straight on a plane chock-full of crack whores, with golden invites to sup at the milky teat of the likes of Spielberg and Silver (and we all know how mammoth and bountiful those teats are). Or something like that. I can't see how they cannot get offered a big flick after this. They will be wined and dined. They will get $40 million for the sequel. And Reese Witherspoon. Prediction.

Yet, I'm scared for these guys. They're on the verge! Though this film ain't perfect — and it may be a bit subdued, away from the Film Festival, and upon second viewing — but it is certainly a damn solid debut effort. I mean, Hollywood has just remade Texas Chainsaw Massacre… and shot an extra 15 minutes of Night of the Living Dead.

So Spierig boys, do a few zombie flicks if you still got it in you, but you've just gotta cast the wrong people in them. Like, team Chevy Chase with Sir Anthony Hopkins. Or Gary Coleman with Dame Judi Dench. And then after that huge success, ditch the zombie genre. Move into romantic comedy. But in the last ten minutes, turn back to the zombie blood-fest. Then do something serious. Like a war thing. But with singing. Or make the biggest zombie movie ever. Like zombies everywhere, all over the world — like, even in Antarctica. Fighting the Predator. With singing. Please? (I have a lot of these great ideas, all the time — I'm out of control).

While the Spierig Brothers haven't necessarily added another layer to the horror genre (zombie sub-genre), they have, rather brutally, accentuated all existing layers. The film also has really super country Australian accents throughout, and if the acting is hammy at times, it is clearly meant to be.

Towards the end, I found the story getting to be a little pushed and silly, but the very ending is the payoff, sure to make you laugh out loud, with its wafts of Razorback and Mad Max echoing through your nostrils. In fact, those classics are ever-present throughout, but as very stark and grim memories. Think Mars Attacks meets Brain Dead. Think A Country Practice meets Day of the Dead.

Yet Undead feels so Australian and it all reeks of a sequel. Which is good, I hope.

Dr Kieran Mangan, though not a real doctor, is thus self-titled to be influential at parties. He never hesitates to give out unfounded medical advice or instruct newlyweds on various marital conundrums. Adept at making up new words, he often finds himself leaning pointedly on university lecture-hall podiums, asking the bewildered crowd, 'Dagnammit, what is it all for?', before security is notified and his presence removed. Twice-winner of several awards he also made up, he has earnt the tag 'No-Quit Kieran' from many an establishment but this has probably more to do with his chronic opium habits. He also draws comics sometimes and occasionally makes music.

This entry was posted in FEATURES and tagged brainzz, movies, undead, zombies. Bookmark the permalink.