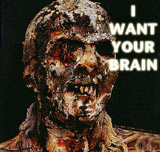 DP: Are you familiar with Thomas Pynchon's “Vineland”, in which there is a whole community of Thanatoids, who just sit around and watch TV all day? Do you have a similar view of the living dead? It's funny, I was in the US last year, and on a train heading from NYC to Buffalo, when i saw this guy sitting across from me, who I will swear to this day is/was Pynchon himself! I tried to engage him in conversation, but to the end he swore his name was Jerry. I thought it was very apt.

RM: A Pynchon sighting! Next time take the guy's snapshot! …

… What's intriguing about [your sighting] is that Pynchon has two known flyways: Somewhere between Los Angeles and San Diego, and Cornell University — which would have been just where your train passed! He was graduated from Cornell (I think with an engineering degree) around 1959, but I'd never heard that he returned. (Nabokov taught literature at Cornell in the 1950s before he became famous/notorious, and moved to Switzerland; I don't know if Pynchon ever took his class.)

I'm a devoted fan of Pynchon's, but haven't read Vineland for two screwy reasons — one, I don't read good writing when I'm writing, it's confusing and makes it difficult to keep my own voice. The other, with Pynchon, is that I really dread the day when I'll have read all the Pynchon there is to read. One of my treasured souvenirs from Oz was an edition of “Slow Learner,” his early short stories, which I'd never seen published in the USA.

After his TV series “Night Court,” the actor John LaRoquette starred in a series in which he managed a city bus station. LaRoquette is an obsessive Pynchon worshipper (he collects rare Pynchoniana), and his character in the show had a running gag of always expecting the reclusive Pynchon to come through the bus station at any moment; there was a buzz that Pynchon was actually thinking of making a real appearance on the show, but I don't think it ever happened.

How'd you recognize him? I heard his most recent known photo was as a Cornell student. I don't think my “Gravity's Rainbow” has a photo, or a more recent one. GR is a tremendously important book, one of the very few postwar novels that tries to move American literature into a new direction; and Pynchon is one of the very few American novelists who still has notions of “the greatness thing,” of huge themes and great originality.

There's a lot of popular (and insightful) American fiction and screenwriting beginning in the '50s that plays around with this living-death lifestyle of mass hypnosis. These are terribly deep waters, political as much as spiritual. A part of it, sadly, is a kind of historical post-partum depression. A half-century later and it still authentically seems as if (our side of) World War II was an absolutely necessary struggle worth fighting and winning. But what does the winning side do, how does it live with its victory? Particularly since victory also left America with an unprecedented economic prosperity.

I think a very good argument can be made that Americans just weren't spiritually, or politically, or educationally prepared for such an overwhelming victory and such material rewards. So we slipped into a default kind of lifestyle which defined us pretty much as producers by day and consumers by night, statistical units of working and purchasing, an audience for advertising. John leCarre called the British version of it the “Pigs in Clover” society, and Randy Newman sang about it this way around '68:

Compared with the things that were at stake during WWII, buying things is not a very thrilling, romantic or inspiring kind of shared national experience, and a lot of writers compared buying into it with accepting a kind of living death. We woke up for awhile to react violently to the Vietnam War, as a lot of us perceived it to be a lethal consequence of the long national materialist coma. But, I mean, what do you do with the condition of being America? Do you teach Americans to want to live simpler and more rational material lives? (We buy and drive Hum-Vs now, those military super-Jeeps, as status-symbol ordinary family vehicles.) We've known since Adam Smith that a modern Western-style dynamic, growing capitalist economy actually depends fundamentally on luxury and frivolous purchasing, on ostrich feathers and Nike running shoes; Quaker simplicity and rationality would be a direct threat to the fundamental structure of our prosperity.

Hmmm, I didn't like that question, clearly it has made me very depressed, I will stop answering it now.

“Invasion of the Body Snatchers” posits a city of alien conformist zombies, and just five or six truly “aware” people who fight a losing battle to thwart the zombies. Ain't that the truth? And how would we defeat the zombies? Mass-market non-conformity so that everyone wants to buy it? There seem to be certain inherent logical inconsistencies in a national program of turning everyone into individuals and non-conformists.

This entry was posted in ESSAYS, FEATURES and tagged Robert Merkin, Vietnam, zombies. Bookmark the permalink.