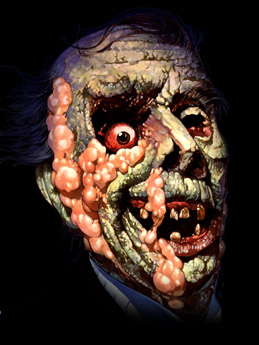 DP: In terms of the draft – in the US, was it based on birthdays? This is my understanding of the way they did it in Australia at the time (my father narrowly missed being called up – i think it was a matter of days). It seems to me this is an even more profound aspect of the whole “living dead” thing – that your status as a 'zombie' is predicated on your day of birth … do you think a whole generation was/is in effect a generation of zombies?

RM: Oh, okay, the draft. Well, that was one fucked up way to round up a lot of testicular-Americans for universal military service …

… by the time it got around to me, it had become a miserable sieve of loopholes that pretty much let anyone from the upper-middle class and the Caucasian part of town duck service if he wanted to; only the rural poor and the urban blacks and Hispanics were getting on the busses with regularity. These weren't issues during World War II. The problem, of course, was that by Vietnam, nobody wanted to go. (During WWII, nobody wanted to be left behind in civilian clothes.)

The month after I was drafted, the system shifted to a birthday lottery. Me, I was having family troubles (throughout history the recruiter's best friend), and I was not at all inspired with college, which until the birthday lottery was the white boy's easy exemption ticket. I'd started working as a reporter for a big-city newspaper already, and just didn't want to fight the draft by staying in college anymore. When thousands of people are dying needlessly every week a half a world away, it just seems a sort of absurd response to sign up for Restoration and Jacobean Tragedy. I was 22 when I was drafted; my nickname in basic training was “old man.”

A friend of mine, a math professor, has shown me a paper from around 1995 which shows that the Vietnam birthday lottery draft was fundamentally misdesigned, favoring some birthdays, making others significantly more dangerous. I find the implications of that — well, I don't know how I find them. First of all, I wasn't caught by the lottery, and never wanted to find out how February 5 would have fared. Then, to learn 25 years later that there was yet another dimension of unfairness and fatality to the draft — lethal bigotry against every male born on 083, 111 and 264 rather than the lethal bigotry we'd all learned to be comfy with against blacks and Hispanics —

DP: What has been the reaction of veterans to your books? Do you find that they share your views? I think this quote from ZJ sums it up: “We have no future as veterans. The only future we have is now, trapped between now and when we get out or when we die over there. After that we have no future. We'll be zombies. We'll be people who were supposed to have died. The living people who agreed to send us to the war won't want us around.”

RM: Thanks for plucking out what I suppose is my favorite piece of dialogue from ZJ. Moiself, though my own military experience was rather mild and safe, it has been my subsequent life challenge to transcend zombiedom, and even learn to have a good time. (My brief glimpse of the Life Australian was actually very helpful in this regard; America is a very puritanical society, as I'm sure you discovered.)

It pleases me that I served. The war itself, of course, was an abomination, but letting myself get drafted let me keep my big opinionated American mouth, vote and citizenship, and it also let me grow older without wondering what happened to the poor black or Hispanic kid whom they drafted in my place when I used some yuppie loophole to duck service. I don't like the “all-volunteer military” which has replaced even the miserably flawed draft. Now our most economically desperate and most disenfranchised children do our risking and dying for us; and consequently our political elite finds it much easier to engage us in even screwier wars.

It has surprised and pleased me that no veteran has ever complained about the book, and in fact I have had nothing but effusive compliments. One vet included a lovely fat marijuana cigarette in his fan letter. I suppose I had cosmic literary ambitions, but I was more than willing to settle just for a very precise and accurate historical account of soldiering during that war, of the feel and taste and sound of it; and I think that has touched my veteran readers more than the politics of it.

This entry was posted in ESSAYS, FEATURES and tagged Robert Merkin, Vietnam, zombies. Bookmark the permalink.