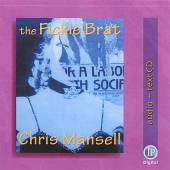 Chris Mansell is a serious poet. She has an agent and a Statement of Intent, and apart from my faithful drinking partner, Tug Dumbly (who just so happens to hail from Ms Mansell's neck of the woods), I don't know any poet with an agent, and certainly none with an S.o.I.

Chris Mansell lives for poetry, or so it is implied in all she writes and all she does behind the scenes, like one of those superhuman dynamos without whom poetry in this country would simply stop breathing altogether.

In Chris Mansell's country, women are women&#151complex, verbose, focused, serene&#151while the men (being men) are pre-verbal, diaphanous, mercurial, walking predicates of tragedy on a grand scale:

Mansell's poems have always been beautifully crafted, and when she reads them, the syllables wash over the ear like the tides of Lombok before the troubles. But as narratives, they are identikits.

Exceptions such as 'Poem almost found in The Sciences magazine' are very much that, and seem put there to placate the more conjectural among us. But the attempt fails in my opinion because poetry stripped back like this relies heavily on ideas, and ideas (nomes, syllables of the soul, whatever you want to call them) are not Mansell's fort?¬©. Her fort?¬© is the crackling coals of assonance and a gentle 6/8 metre, like Dylan Thomas at his 'Poem in October' best:

She was not of our kind
or we hers
though we thought we knew
her and the shape, scent
movement, thought of her

('Poem for the death of a friend during childbirth')

I only wish readers could hear this poem being read by the author as I just have. She is a brilliant reader of her own work and this piece is the strongest in the collection, well worth the RRP on its own. Of course, elegies have their own in-built narrative and sonic, and this poem is up there with the best of them, leaving us enough to chew over and a great deal of space to ruminate on the aftertaste. Like the lamented herself, the poem is 'herself this one/catcher of light/coiler of dreams'.

But then we return soon enough to identikit narrative and archaic paradigms&#151'you are a woman/you say to yourself therefore brave'&#151the title 'Ordinary Truth' saying it all, I'm afraid. This is where Mansell's poetry falls down all too often, this paucity of original thought. I would have expected more from a poet with a Statement of Intent but then, maybe, that's the problem with so much of the creative output of Mansell's generation: agendas.

All the same, Interactive Press have done a good job with this collection, although not everything works that should. Nothing flash, but you can follow the text on your PC console as Chris Mansell's beautiful warm whisky voice sings its odes to a fading world.

Justin Lowe is the author of six books of poetry, two verse novels and a work of fantasy fiction. He also edits the poetry blog Bluepepper. His sixth collection, "Nightswim, has just been released.

View all posts by Justin Lowe on Cordite →