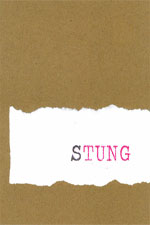 Chris Mansell is a widely published poet with a lively range of interests, a multi-talented writer who bridges various creative worlds; her work sometimes fusing with music, the visual arts, and theatre. Her departure from a narrow specialisation in poetry is highly admirable, but may have made her somewhat under-appreciated both as an energetic innovator and important poet of her generation. Mansell’s first book of poetry appeared in 1978, and she has published more than 25 books and chapbooks in the intervening decades; while her Schadenvale Road, a collection of short stories, appeared in 2011.

STUNG represents a return to some of Mansell’s ongoing experimental concerns, foregrounding this vital dimension of her work. There is an obvious first clue in the typography, with the S of STUNG printed in grey ink, and TUNG (appropriately ‘sticking out’, as it does) in pink. Twin colours continue to alternate throughout the book.

STUNG consists of 72 square-shaped units of text, or ‘text tiles’, four of which are diagonally disposed across most of the book’s right hand pages. All the left-hand pages remain blank, providing a sort of conceptual breathing space.

Just one glance immediately reveals the pattern, with its ‘squads of quads’ joining across their adjacent corners, so one can read from one to the next, then down the page like stepping stones. 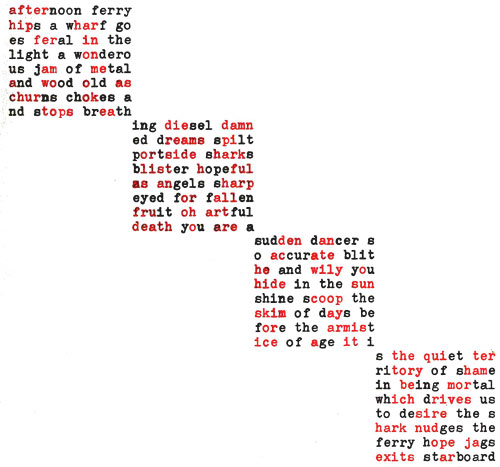 We have entered the territory of concrete poetry here, where the extreme formality of the book’s layout begins to shape content. Running counter to this, however, while cleverly mining a certain frisson it allows, the text itself – uniform within these severely formalistic, four-sided containers – immediately plunges readers into a stepping-down, breathless and heady onrush of words, entirely without punctuation. The expressionistic and often elevated lyricism of STUNG is thus held in a fine balance by the book’s formal restraint, and Oulipo meets concrete poetry in the service of conceptual play. But there is also passionate protest, mostly against the inescapable crap of life!

A lyrical passage which begins STUNG could refer to Sydney’s Circular Quay, or industrial port setting: ‘afternoon ferry hips a wharf goes feral in the light a wondrous jam of metal and wood ….’

The poem, after achieving very rapid liftoff, then rebukes two-faced summer: ‘… summer spilt hard on the street … promises futures summer lies its head off … summer you lying dog low smiling before you kill us you darer of fate and tickler of whim torch torturer wonder ….’

With tongue now fully free to sing or sting, we hear how many on Earth have been comprehensively stung (and in this context, conned). In the following ambiguous passage, summer’s rays of light seem glamorously life-enhancing at one moment, then like death-dealing military lasers the next: ‘… the glitzdom of over the edge of limelight of fantasms of lightfooted imaginary night spotlighting the flash of daylight an eyeflash straight to the brainstem arch over the edge … instant blisterglam ….’

STUNG then delivers a fusillade of pungent mini-diatribes against everything restricting and ugly in the human condition, including war, preventable global poverty, perceived crazy religions, the international arms trade, and particularly the one rule of thumb of economic exploitation. In these sections, images tumble chaotically: ‘… religion claiming the earth … fantastical dressups impress the poor dancing dreams around the ugly roofs … surely unbelievable to those who speak it as to those who hear … o god save something from the rubble if not truth then money render unto concrete what is abstraction power into glory into gore how it goes ….’

Energy runs in tandem with much verbal invention, particularly towards the end, where we are left waiting, if not in God’s – then at least in Beckett’s – waiting room; waiting, that is, for things (not likely, on the evidence) to somehow improve: ‘ … next millennium gone to the hogs faster a violation wait waits waited waiting will wait was waiting will have waited will have to have waited…’.

STUNG is a spirited cry of protest, while remaining defiantly creative; and sympathetic too, to all those rowing in ever smaller circles in the same little tragi-comic boat on earth, or is that barb-wire canoe? This book is an excellent example of small-scale publishing, with care and attention to detail consistently evident, from concept to writing, through to text design, paper and binding.

This entry was posted in BOOK REVIEWS and tagged Chris Mansell, John Jenkins. Bookmark the permalink.
John Jenkins is best known as a poet. He also writes short fiction, non-fiction and occasionally for radio and live performance. He has worked as a journalist and book editor and taught in universities. He lives near Victoria’s Yarra Valley, and is widely travelled. His most recent poetry book is Growing up with Mr Menzies (John Leonard Press, 2008).