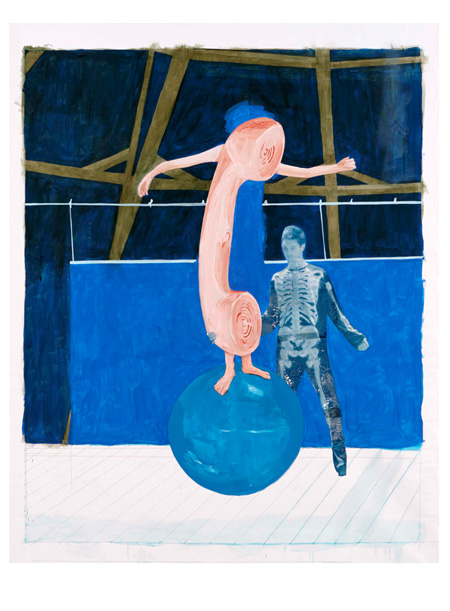 One of the sequences produced by the collaborative art project A Constructed World renders the phrases ‘No need to be great’ and ‘Stay in Groups’ in a range of media – silk-stitch, screen print, photography and painting. One of the painted versions of the image shows a naked woman covered in yellow post-it notes overseen by a hulking, shadowy male. These figures represent the artists Jacqueline Riva and Geoff Lowe. The image appears again in the form of a photograph and the installation was staged in various places around the world – as if the only way to get the message across would be to subject it to constant repetition in as many different formats as possible. Indeed, a number of the collective’s performances and installations attest to the impossibility of communication – even as these take the form of images that can’t fail to deliver.

As one art critic has pointed out, Lowe and Riva ‘work together, but not simply as individuals, nor simply as a couple, nor simply as collaborators. They are peripatetic, constantly on the move from Melbourne to New York to Turin to Paris to Bordeaux to Singapore, and their work often takes transformations of movement as its object.’ The movements of A Constructed World, then, might be said to trace the wanderings of collaboration itself. In assembling the poetic collaborations gathered here, I was frequently reminded of this sense in which ‘the genus is always one of its own species’.1 As Louis Armand and John Kinsella point out in the notes to their Synopticon, there is a sense in which ‘all writing, all forms of cultural “production,” imply collaboration.’2 For Armand and Kinsella, however, it is through the deliberate activation of this mode that ‘collaboration steps beyond the implied to the overtly political.’ In his brilliantly aleatory introduction to Synopticon, the poet and translator, Pierre Joris, argues that ‘language itself is always already a translation’3 and so, whether produced solo, in tandem, or through the auspices of a group, to ‘make words with things’ is to open the valves, to countenance the existence of what we might think of as something like a ‘principal of contamination’, to enact the repeated staging of the frisson that can frequently seem to be altogether missing from daily life yet is arguably constitutive of it.

Pam Brown: with Maged Zaher, with John Kinsella and for Kate Fagan

The poets assembled here have, in the writing and thinking that has taken place over months, years, and sometimes even decades, achieved work that is, to me, exciting, idiosyncratic and sometimes even groundbreaking. It is with this idea of geopoetic cataclysms in mind that I’ve chosen to begin this chapbook with a recording of a reading of Banjo Paterson’s famed The Man From Snowy River by Michael Farrell and Oscar Schwartz. As John Tranter noted recently in his reprise of Pam Brown’s ‘Rewriting Australia’ feature in Jacket 39, ‘Paterson shows up as a punching bag several times, perhaps because he is an old, dead, conservative white male with his portrait on the Australian ten dollar bill.’ Paterson’s treatment at the hands of Farrell and Schwartz installs a mathematical disjunction at the filthy heart of Australian colonialist rhetoric. In doing this, it prises the ballad and its intentions apart, enacting what Farrell has called an ‘unsettling’ of Australian poetry and continuing Schwartz’s own investigations into the ‘if it bends, it’s funny’ axiom, as evidenced in the Kafkan vaudeville of his ‘How To Eat A Banana Parts I and II’.

Arising out of this fissure at the heart of language, we find a previously unpublished extract from Amaranth Borsuk’s Between Page and Screen, a ‘kind of digital pop-up book’ of poems that relies on the reader’s ability to hook up to a webcam and trigger the software that decodes a series of stencilled markers. These stand in for a compendium of letters exchanged between two boundary-challenged lovers, P and S. Borsuk’s ouevre is frequently regulated by an ethics of constraint (see her recent Handiwork which investigates ‘the relationship between writing and torture’). This technological collaboration with web architect, Brad Bouse, hobbles itself to technology and the reader in a projection that situates the encoded materiality of the book at the site of its own distortion and reminds us of the holographic status of the object.

Toby Fitch and Kate Middleton have previously demonstrated individual fascinations with the treacherous and rewarding interactions that take place when language goes after image, Fitch in his use of the notorious Rorschach inkblot tests as triggers for an attempted reconfiguration of the Orpheus myth (Rawshock 2012) and Middleton through numerous poems and essays that investigate the ekphrastic. Any way you want to look at it, the relationship between image and text is always going to be one that tarries with ‘that which cannot be crossed’.4

Their ‘Alchemical’ takes the form of a sestina that makes a move on Brett Whiteley’s epic 18-panel painting, Alchemy. The poem comes across as a wild mistranslation of its own intentions, pinned in place by the formal constraints of the sestina and alerting this reader at least to a situation in which form can be said to posit impossibility itself: ‘You’re especially wild / With a strange malaise for more’.