The Lee Marvin Readings: An Evening with Edmund Gwenn 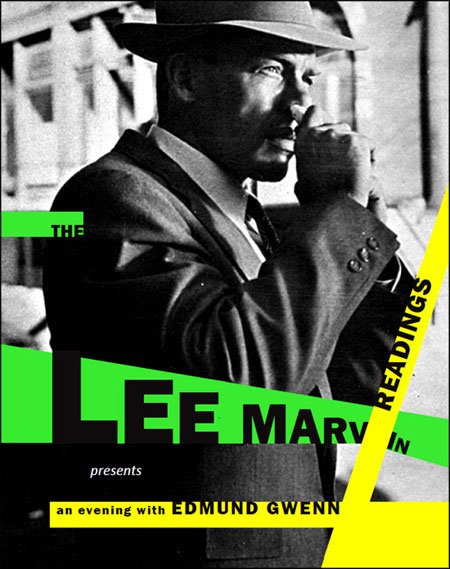 A chapbook curated by: Yolande Sharpe and Kerry Urquhart-Neue.

The Lee Marvin Readings series has run, off and on, since the 1990s. The venue has changed a number of times – from Adelaide nightclubs like Supermild, to the Iris Cinema, to the charmingly Zurich-1917, bo-ho De La Catessan and the more robustly hard-drinking and confrontational Dark Horsey bookshop at the Australian Experimental Art Foundation, where it now takes place. The sessions have been organised, run, staffed and emceed by poet and art critic Ken Bolton.

The Lee Marvin Readings format generally features two sets per night, comprised of two readers in a set with a break between for the audience (writers, students, artists, general readers, the curious, the pin-headed, the counter-intuitive) to talk, look at books or listen to the intermission music. Occasionally, nights are devoted to a single prominent writer – designed to give a career overview, or to give context to and show the development of some particular run of work.

The readings are held on Tuesday nights in approximately every second month, starting in May. The AEAF’s Dark Horsey Bookshop specialises in new literature and has great holdings in philosophy, politics, film, art, design and architecture. The gallery space adjoins the shop and ‘advanced art’ is in view during the sessions. Readers are introduced with a brief description of their careers to date, bulked up with apocryphal biographical detail. The philosophy of the Lee Marvin Readings is that it’s not about the comparison of career escutcheons and epaulettes, but new writing.

Some highlights of the 2012 season are selected here, somewhat at random. It was a good year. Who to chose? Ken Bolton said, ‘You do it!’ as he handed us his growing list of authors.1 Between us, we had attended most of the readings. This chapbook focuses on who we tracked down and what poetry/prose they’d read.

And now, our selections as a sampler of the work that featured in 2012. —Jo Sharpe & Kerry Urquhart-Neue

Christine Collins | I May Have to See You Again, Charlie

Pam Brown | What’s the frequency, Kenneth? | More than a feuilleton

Jill Jones | Hindley Reverie | No, the System Did Not Work for Me

Yolande Sharpe and Kerry Urquhart-Neue | The Lives of the Writers, their Vicissitudes, Proclivities, Highs and Lows

All pictures by Martin Xmas

This entry was posted in CHAPBOOKS and tagged Cath Kenneally, Doug Mason, Ella O'Keefe, Jill Jones, Kelli Rowe, ken bolton, Laurie Duggan, Pam Brown, Shannon Burns, Steve Brock, Tim Wright. Bookmark the permalink.
A loony tune, something of a zany, a yo-yo with money, Ken Bolton has been variously described. In truth, he is a curious figure— irascible, intemperate, vituperative, yet devoted, apparently, to an idea of 'the Beautiful', as somehow defined. Lord David Cecil held him to be 'the Hulk Hogan des nos jours' — and found in him 'a Pol Pot, perhaps the very Pol Pot, of the aesthetic.' Bolton has published many books, the most recent being Lonnie's Lament (Wakefield Press). Forthcoming in 2018 are Starting At Basheer's (from Vagabond Press) and Species of Spaces (Shearsman Books).