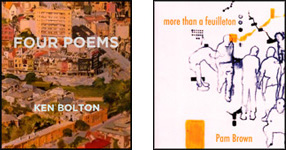 If there is one true love in the history of Australian verse, it’s perhaps the love of Pam Brown and Ken Bolton. As you should expect, it’s not a normal kind of love at all – or maybe it’s the only normal love, depending on how you’re predisposed to taking the word or the thing (‘normal,’ I mean), and depending whether you think you can tell the difference between the two (‘word’ and ‘thing,’ I mean). For this isn’t the schlocky mix of Hollywoodized sex ’n’ sentimentality that still sports about your average RomCom like a late-capitalist dolphin or Dauphin amongst shiny commodities, but an alliterative, drifting literal love of litter, the day’s detritus as glancing nuances of leaves and leavenings. Like G.M. Hopkins put it in his already-crypto-heraclitean (crypto-brownian? crypto-boltonian?) Spring and Fall: ‘Margaret, are you grieving/ Over Goldengrove unleaving?/ Leaves, like the things of man, you/ With your fresh thoughts care for, can you?’ No, this love is there, patent, unleavened, folded, torn, and scattered from the start, from the flat little words on the front-cover to the tail-end of the isbn on the back. Technically, a feuilleton is a leaflet, a little leaf or bundle of leaves, and it’s clear – if we can believe that Brown’s title delivers on its promises, which isn’t of course so clear – that this booklet has to be more than that. But how much more? More is in question. After all, what is ‘more’ and what is ‘less’ in the ambivalent promise of a title to denominate the material entity it entitles and which it inscribes? Page numbers or number of pages? Or is more a qualitative determination? Perhaps this isn’t a millefeuille in its matter or number but perhaps it’s a metaphorical millefeuille we’re speaking of or are being told about here? In Sydney, that’d be (or at least be called) a vanilla slice, I guess. Not the Moor of Venice, or the more-ish-ness of Parisian pastries, but the More of Sydney, an indeterminate but absolute more that is utterly quotidian in its exception to its own everydayness. For ‘watercolour’s a riddle, the city/fucked-up & not like Paris’ (Brown 25) and where there’s

for there are always ‘… days/ totally lacking in mystery’ (Bolton 53). Unlike Brown, he’s a guy who calls a book with four poems in it Four Poems. Not that this is as literally-lacking-in-mystery as you might (foolishly) think, for one of these four Four Poems is itself called ‘Four Poems,’ giving rise [giving what?] to that which we might call Bolton’s Paradox (after Dirty Bertie’s famous ‘Russell’s Paradox’), given that this unboxed set includes itself as one of its own members. And that poem, equally absurdly, is literally going one better – one more – than a poem that it doesn’t include but to which it alludes, the dreaded John Ashbery’s Three Poems. It’s like an autoritratto by a complex mummer, or one of those extraordinary C17 anamorphoses that looks like a smeary doughnut (donut?) which only resolves into representation when you place a mirrored cylinder in its centre.