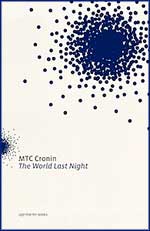 A book as an experience of sampling, and of reading over a long period of time, may be ideal for the writer; but it won’t be that for all readers, especially not reviewers.

MTC Cronin has published several highly structured books in the past: Talking to Neruda’s Questions, and The Flower, The Thing. Here the double title functions in a looser, more umbrella-like way; the book apparently aims to use death as its guiding concept: the assertion that the poems are themselves metaphors suggesting flexibility in her use of death as her theme. Yet it still means including poems that end sentimentally, in the old, bad sense, like ‘World-Over’: ‘not a mountain flinches/when little rivers weep to the sea’. I don’t mean that we can’t deal with poems like this, but the range feels perfunctory. I want a bigger, badder book, or a slimmer incisive one. Death in fact feels like the wrong framework: its intent is ostensibly double, in that the poems could represent death or be dedicated to death, yet ultimately is too loose and allows too much in. I could definitely take more poems like ‘ “As For Us We Will Have Huffing Bankers/Generals Covered in Vomit and the Usual Complete Idiots Found In Every Country” after Benjamin Peret’: a title like that can carry you through a lot. But I can do without the cheap melodrama of the ending to ‘R and R (How the World Unwinds)’: ‘as the pretty young thing/slowly removes her socks’.

Sentiment creeps around the edges of this book: sentiments associated with the dead, perhaps the dead of an oppressive regime. Better sentiment than coldness or muzak, and Cronin’s poems aren’t (usually) quite sentimental but, rather, gesture towards sentiment in a line or phrase: or perhaps it’s rather the generality of the scene that makes the sentimental abstract. For example, in ‘God So Far’:

Both the negativity of ‘false’ and the abstraction of the ‘us’ somehow holds the sentimental action of ‘searching the stars/for consolations’ in abeyance. A subordinate theme is that of talking of – and to – children. ‘Decubiti’ uses this theme in productive ambiguity: ‘I look at children and wonder/how soon they will be like me’. Here the narrator is talking about other people’s children, not genetic likeness.

Cronin almost seems to be a conceptual poet, challenging what can be a book and what poetry; she also – aptly enough in a death book – challenges taste and decorum: ‘The angels taste us/and we taste like the flesh of animals/dying in pain’ (‘The Angels’). This was my initial sense; I wondered whether it was subversive or incongruous that her book was beautifully produced by UQP: yet the gestures of the book, repeated, accrue a heavy sense of literariness. Many of the poems are ‘after’ or ‘for’ people, often famous poets. I wish they were less apparently sincere. Often Cronin’s endings seem to be the point of the poem, and where they trip me up. For example, the ending of ‘Speaking of Night’: ‘all words speak of night/even when they describe the day’. Neruda can be guilty of weak Neruda, but why should Cronin be? Or take ‘Searching Enough’, which contains the wonderful line ‘Only a classroom of snow-leopards are left in the world’ but ends with ‘They say it is not worth searching/For what is found only in realization’. This ending wasn’t worth searching for; another, the ending to ‘God is the Shadow the Universe Casts’ was: ‘Hail to all accidental discoveries’.

It’s impossible to tell what kind of book this could have been to read, if gutted. ‘A Great’ is ok; ‘Get the Caretaker’ is ok; they are just ok. Cronin practices a superior mode when she makes what she calls herself ‘Small Judgments’, a sequence of nine couplets. Here are the first three:

Or a poem like ‘A Stone Nudges A Stone’ where Cronin’s influences produce an evocative synthesis. That she is a bard adopting roles is displayed in the facing poems ‘And Always the Sky’ and ‘God’s Silence’ where ‘god’ is lowercase in the first and upper in the second, reverting again to lower case in the next poem ‘Pray for Rain’, which concludes ‘Your god/is drought’. This poem is the stronger of the three and the simplest: thirteen short lines, where lines 8-11 repeat lines 1-4: ‘Pray for/rain./Give thanks/for rain.’ It reads like a translation of an ancient song and perhaps is. The ending, which is powerful enough, points back to the ineffectualness of ‘god’ as a word in the previous poems. In other words, repetition gains strength within the poem, but not across poems grouped together. ‘Metaphors for god’ is a book residing within this book: there are a lot of god poems.