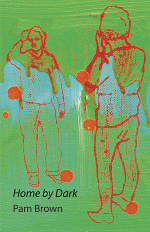 What does it mean to be ‘Home by Dark’? Is it a parental instruction to a potentially wayward child? Is it an expression of relief after a day of threat and uncertainty? Is it a navigational expression, a crepuscular refiguration of ‘North by North-West’? Is it a simple description of an accomplished movement, or another possibility altogether? To open this book is not to find such questions answered; it is rather to move and be moved with and by somebody who, as the epigraph from Kevin Davies has it, is prepared to ‘just keep staring into that English-language night sky.’ We’re all in the gutter of language, as the subjacent Wildean allusion would imply, but some of us are staring at … well, what? The stars?

Perhaps. As the first poem, ‘Windows wound down’, reads:

But we see those stars blinking back, not from the safety of a domestic porch or balcony, not even from the enclosure of a suburban picket fence, but from the window of a car ‘parked under/a chalky old light pole’ (9). Immobile movement – that is, all sorts of oxymoronic encounters or disjunctive montages – is the presiding genius of these poems in which one, two, three wholly surprising everyday events are briefly crystallised, only to be succeeded in their turn by the verse of a railway line or a page. In fact, every event is itself already multiple, an aggregate or assemblage of disjoint forces, a ‘fast hovercraft/to the pink university –‘ (48).

Are these fragments carefully shored against the ruin that, in their very shoring, they cannot not anticipate and exemplify? Or are they merely haphazard residues of half-forgotten intensities? Lists recollected in the tranquillity of a belated aftermath? A mapping of the topology and time of the self? The poems enumerate such enigmatic events, events of externalised emotion, meandering exquisitely without evident end. Beyond telos or eschaton, there’s drop after drop of immeasurable little excess in the stroke and twitch of each stanza. One might think of Gottfried Wilhelm Leibniz’s staggering image of the infinitesimal infinities of the natural world: ‘each portion of matter can be conceived as a garden full of plants, and as a pond full of fish,’ where ‘each branch of a plant, each member of an animal, each drop of its humours, is yet another garden or pond.’ Yet, unlike Leibniz, we are no longer in a natural world of plants and ponds, but the divergent virtual worlds of free-to-air fossils, loathed palm ferns, rusty bolts, windy corridors, anal vampires, menstrual blood in a jar, mex internet café grills, Portentous Big Bob Dylan Ballads, Oulipienne experimentation, Gertrude Stein and Foxtel.

Moreover, and doubly unlike Leibniz, it’s not clear that ‘every event has prior to it, its conditions, prerequisites, suitable dispositions, whose existence makes up its sufficient reason.’ On the contrary: so much happens in such little things that it is impossible to say how much depends upon this so much:

Everything is constantly changing but the form of change remains; or, at least, the hope or fear that the form of change does itself not change. Hence the familiar differences – between narration and description, invention and discovery, history and imagination, waver towards indiscernibility – in such a fashion that one occasionally wonders who’s who or what, or what’s what or who, or whose, or where:

Brown’s phrases’ subtle drift can lull an unsuspecting reader into and past limit-situations before anyone has noticed what’s going on. All of a sudden, a small soft drift of words can recur like a hard blow to the back of the head. But Brown is not only ‘moving the bricks around’ (119).