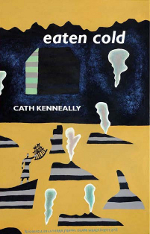 From the outset, Kenneally forges the important link between her poems and Charman’s, informing the reader: ‘each poem in this collection is a match for a corresponding poem in Charman’s … I intend these response-poems as a homage to Charman’s work.’ Honoring a poet in this way challenges response-poems in the tradition of Raleigh’s response to Marlowe’s ‘The Passionate Shepherd to His Love’, written to debunk the original. Or, in the case of Ted Hughes’ Birthday Letters, written in an attempt to overwrite the original with an alternative version of the same event. Interestingly, Kenneally points out that Charman, ‘approves of my poems, pronouncing them ‘foreign’ that is, quite distinct from the products of her own unique sensibility.’ This is best seen in Kenneally’s response-poem to Charman’s ‘televisionier’. While Charman outlines New Zealand’s history in the 1980s:

Kenneally writes of Australia and specifically her work on Adelaide radio:

Therefore, Kenneally initiates a poetic conversation between two powerful women poets. Her consumption of cold snack is referenced in the title of her book and in the bracketed references to the corresponding titles of Charman’s poems. The use of ‘eaten’, further supports the response-poems as taking small ‘snack[s]’ or portions of Charman’s poetry in order to create new servings of poems; the ‘cold’ suggesting that she has let them sit and steep in order to create an interesting space between the poems.

Kenneally’s poems are brilliant Carver-esque sketches of everyday life. Her minimalist approach, evident in her preference for consistently short lines, creates fast-paced forays into the complexities of day-to-day existence. In responding to Charman’s poems about her mid-career change to school teaching, Kenneally has her own devastating sketches to offer. In the opening poem, ‘the prac teacher’s day’, the teacher is ‘only eight years older’ than her Year 9s:

The eroding line lengths, create a visual impression of the prac teacher ‘remember[ing]/not to/stretch/to write up high’ and possibly show her thighs or panties to the class. Her youth and nerves are perfectly captured in Kenneally’s lines: she ‘wants urgently/to round the desk and sit with them’; she is still a child, herself.

‘Lord of the Dance’, a popular hymn sung at mass, chronicles the ‘class of thirty girls in veils and froth’ making their First Communion. The image of the host being digested along with cakes and cream is a wonderfully blasphemous moment, replete with single and two word lines, making a long gullet down the page:

The second section, ‘radio daze’ is a single long sequence that uses Charman’s ‘televisioner’ to inspire a discussion of the poet’s experience as a volunteer at the ‘country’s first public radio station … below the Hughes building/at Adelaide University.’ The flotsam and jetsam of her days are brilliantly recounted with the entertaining voice of idealised youth: ‘kids … at least/that’s one/piece of poo/God didn’t/drop/on me.’ However, the references to the death of language undercut the lightness of the tone, to convey something darker about ineffability:

But it is the final section of Kenneally’s eaten cold that dazzles with its ruminations on mortality, family and identity. A Benjamin Button-esque reference to ‘daydreaming/backwards’, combined with a Dickinsonian final line in ‘dead to the world’, makes for a complex poetic examination of the unconscious:

Eliot argues, ‘The good poet welds his theft into a whole of feeling which is unique, utterly different from that from which it was torn.’ Kenneally welds her eaten cold into a unique conversation between poets. Concluding with the line: ‘keep thinking/of me’, she invites the conversation to continue.

This entry was posted in BOOK REVIEWS and tagged Cassandra Atherton, Cath Kenneally, Janet Charman. Bookmark the permalink.
Cassandra Atherton was a Harvard Visiting Scholar in English in 2016. She has written seven books of prose poetry and is the current poetry editor of Westerly and is co-writing Prose Poetry: An Introduction for Princeton University Press.