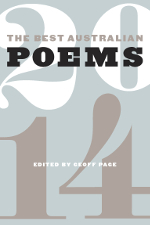 Being in and of one’s time (in favour of it, in fact) means producing work that is sensitive to the discursive furies of the day – the atmosphere of mutating code that the poet must stick to poems in new and strange forms. All else is nostalgia and denial. No-one knows what it means that Australia’s imperial republic, whose god has finally been revealed as cosmopolitan capitalism, is, in the history of colonies, still in its infancy yet so impressively seems to be approaching an end of days. If you’ve got burnt chaps and a warm six-shooter (cowgirl), these are exciting times.

Being a pundit of poetry in my locale I have read and heard many poems this year, both incendiary and flatulent; of all that I thought were great, few (fewer) have made it into this book. The Best Australian Poems is a curatorial exercise, and in this era of the professionalisation of poetry and the gorgeous megalomania which attends it, inclusion in this annual anthology has become for practicing poets a career necessity, and for the retiring a source of kicks from appearing in what is looking each year more and more like an annual Christmas newsletter of Australian poetry. This one reads like an Almanac of Australian Family Poetry Written This Year and Liked (and perhaps slightly corrected) by Geoff Page.

The pursuit of poetry and poiesis has always been for me an erotic one; life is compelled to seek out other forms of life for generative encounters, and this seeking is impelled by various annihilating impulses that gives Eros its devouring shadow. The eternal replay of an embalmed ethos in poetry is one of its perverse pleasures, I think. You should read as many kinds of poetry that are anathema to your tastes and instincts as carefully as your daemons and settling breakfast will allow. Alan Gould’s poem ‘Charlie Twirl’ is hilarious. In the ‘crackerjack’ mode of WWII sentimental packaging, it seems written for the connoisseurs and cognoscenti of cuteisms from that era:

Buggeration. We’re doing lines of rhyming couplets that shimmy around a dreadfully employed pentameter. Poets should get high on their imaginations, and famous bits of newsreel are fair game as common places in which to situate a poem, but on Boxing Day with a Drambuie in one hand and a well-rolled Champion Ruby in t’other, do you really want to read lines like: ‘to skip and sway and doff his trilby / pirouette his sideways smile, / and signal how all futures will be / made lighter for his style’?

If I want English craft I think I’ll take Sir Thomas Wyatt: from the present I want dirty ontologies, I want play, I want stupefying (‘Il m’a beaucoup cretinise’ – Lautréamont has greatly stupefied me). This does not bar traditional lyrical flourishes from poems that are productively confounding. Michael Farrell’s ‘A Lyrebird’ is a stunning rigmarole of lyrical palaver:

Farrell collides the incantatory rhythms of traditional forms with the shape-shifting figures of the bush, merging the historical and the phantasmagoric with the kind of hush that can belong to both the lullaby and the nightmare. Our civilisation is a noisy one, and instead of using the lyric to enforce a romantic synthesis of phenomena, Farrell prefers the quiet racket of a sweet sounding and weird harmonic discord. Sam Wagan Watson’s poem, ‘BLACKTRACKER … BLACKWRITER … BLACKSUBJECT’ is warrior-like in the best sense of being engaged physically and metaphysically. What is being tracked is the devious or dubious self that would presume to write in English without absolute guile:

The wicked compounds of blackwriter and blacksubject set at a scintillating distance the techne of language as both a trick of colonisation and a trick that can be turned on its proprietors. With fine ambivalence Wagan Watson celebrates being marked for difference, being hunter and hunted, and his inclusion here shows what happens when weapons are put on the market for one cause and then used for another. The word ‘Queen’ has never looked and sounded so insidious as it does in this poem (I dare you to compare it to Jamie Grant’s awed reference to Lizzie in his spitfire poem).

Jill Jones gives us a whimsical through-composition (fugue) of the manifold types and eras of light that come to make up any (every?) confused moment of being, demonstrating that making perception is always already within the logic of myth-making, that we are wet-electrical archives of broiling code through which lymph, mitochondria and coffee bean continue as a kind of droll fission:

Duncan Hose is a poet, painter and academic scholar. His latest book of poems, One Under Bacchus, was published in 2011 by Inken Publisch, who also released his first collection, Rathaus, in 2007. He has published poems in Cordite, Steamer, 543, Jacket, Jacket 2, Island, Southerly, Overland, and The Sun Herald. His work is anthologised in Outcrop: radical Australian poetry of land (Black Rider Press 2013). In 2010 he was the recipient of the Newcastle Poetry Prize.

View all posts by Duncan Hose on Cordite →