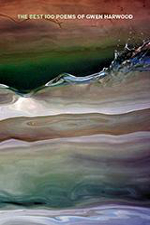 Here is a new selection from that marvellously ardent poet, Gwen Harwood, a crafty voice that was heard from both Brisbane and Tasmania. In welcoming it, let me declare that Greg Kratzmann and I have a Harwood selection in print, but our book bounces back here from Manchester and must, as a result, be rather more expensive.

Accordingly, a new, local selection was called for, both to service the general reader and for classes of high school students. Black Inc has come up with one now, with a watery sepia dust jacket.

Greg’s and my choices from Harwood’s personal, plangent and witty range are different from that of the new volume, but that’s what happens to editors and their sensibilities.

The editing and production of this book raise interesting questions, which it does not seek to answer. Gwen Harwood’s son is cited on the dust jacket as being responsible for selecting and compiling it, but nowhere in the volume itself is he acknowledged: John Harwood must have been directly involved in this cloak of invisibility. Doubtless, then, he laboured to decide which were ‘the best 100’, but demurely so.

The Best 100 Poems is the challenging start to a title, as though the book in question had been edited by God, or by F.R. Leavis. On further burrowing, I found that Black Inc. has published two other such collections of Australian verse: one of Les Murray, chosen by himself, ands one of Dorothy Porter, selected by Andy Goldsmith. There’s an editorial policy here, with elegant variations.

Plainly, this book has been planned as a school text from the very start. It seems economically produced; and it contains not one jot or tittle of ancillary information, which could be siphoned into student essays. Above all, two of two most written-on sonnets have been omitted, one being replaced by a rewrite.

Somebody in the system has had enough of the likely teenage explications and sudden gasps. The young will not find themselves exposed to the acrostic signal, ‘Fuck all editors’. But they will find wonderfully strong poems, charged with diagonal shafts of light.

Two other, famously feral early sonnets are here, their recantations clustered into a comical cluster, innocently dubbed ‘Later Poems’. As one of these begins, ‘She sits in the park, wishing that she’d never written/About that dowdy housewife and her brood.’ This trio is joined by two other ‘Later Texts’, the very last closing with ‘Whose hand is it that holds your pen?’ Not Professor Eisenbart’s, that’s for sure, let alone Timothy Kline’s

Could a gentle detective story be written about the preparation of this volume, its motives and policies? Gwen Harwood’s creative eloquence, her poetic oeuvre and sustained practice of ‘art’s miracle’, would certainly be strong enough to stand it. As she wrote, ‘All’s quiet at last: the world, the flesh,/ the devils burning in my brain.’

Our detective would discover that buried deeper in the text are several of the poet’s old personae, Francis Geyer, Walter Lehmann, and Miriam Stone, under whose monikers she published many of her poems early on. At least two other noms-de-plume did not make the editorial cut. But these zigzag trails have been finely traced by Cassandra Atherton in her 2006 study Flashing Eyes and Floating Hair. I should add that sometimes in returning to The Best 100 I detect the gentle hand of decorum, which is one of the reasons why the book cries out Syllabus to me.

But nothing diminishes my tribute to Gwennie, who teased me often enough, and who looked out onto Tasmanian landscapes romantically charged with her emotions, as in these few lines among so many:

This entry was posted in BOOK REVIEWS and tagged Chris Wallace-Crabbe, Gwen Harwood. Bookmark the permalink.
Chris Wallace-Crabbe has a wide reputation as poet, while his most recent books of verse include Telling a Hawk from a Handsaw and New and Selected Poems (Carcanet Oxford Poets). He has chaired Australian Poetry Limited and is still a Professor Emeritus at University of Melbourne. He remains an outdoor person.