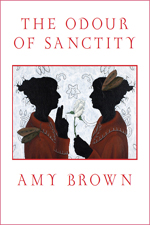 The Odour of Sanctity by Amy Brown
Victoria University Press, 2013

The Odour of Sanctity is New Zealand poet Amy Brown’s second collection, and a substantial one too, weighing in at 240 pages. It is a speculative work which postulates the potential canonisation of six historical figures, three granted sainthood (St Augustine of Hippo, St Rumwold of Buckingham, St Elizabeth of Hungary) and three non-saints in Margery Kempe, Christina Rossetti, and contemporary American indie rocker Jeff Mangum. The Odour of Sanctity takes these six subjects through six sections of the sainthood process, finishing with a seventh sestinesque envoi section in which the subjects converse in three pairs.

Clearly, some readers may be put off the task laid down (offset a little by a handy character/events chart in the Appendix) and others by a lack of interest in the subject matter. The 2010 canonisation of St Mary Mackillop introduced many non-Catholic Australians to the sometimes Pythonesque world of Vatican-confirmed miracles. Those who were entranced by that should find some enjoyment in The Odour of Sanctity, provided they don’t take themselves, or much else, too seriously. Brown, a non-Catholic, tends to sail a middle course between her empathy for the deeply human cri de Coeur ‘Please let our faith make sense’ (70) and her playful sniping at the artifice of Rome (‘Did God / mind which bishop grew a halo? / No. Many subjects make good / saints; the choice is arbitrary.’ [218]).

The technical achievement of this book is quite remarkable and is suggestive of a virtuoso talent which should only prosper, given that Brown is ‘only’ thirty – though, as a second collection poet, her ‘poetry age’ is arguably greater than mine. With the introduction of a new character or section, the form changes, refreshing itself visually and rhythmically. The Christina Rossetti sections most obviously borrow from Rossetti’s neat rhyming quatrains and Kempe’s halting mania is replicated well in free verse. No doubt there are more metapoetic and metanarrative features for the technically-minded or academically-immersed to pick at, and the References section of the Appendix hints at further forays for the curious or intrepid.

At its best, The Odour of Sanctity – which draws its title from St Elizabeth of Hungary’s famously sweet post-mortem aroma – is hilarious, assured and often moving. Consider, for example, an early pseudo-autobiographical scene in the voice of Rossetti:

One of the joys of the book is encountering new oddities and eccentricities for the first time. St Rumbold was one such discovery for me, and I found his three-day-long life of towering prophetic utterances both tragic through his own eyes (‘Born old, I’m now / ancient. In a sense I am Jesus.’ [68]) and wonderfully ludicrous through the eyes of others:

This second section, in which witnesses testify to the saintly qualities of the subjects, is unfortunately far too long. The first, autobiographical, section’s need for introductory breadth and depth might justify most of its 80 pages, but to follow that with 80 more from some fairly anodyne witnesses (Augustine’s girlfriend notwithstanding) may test the saintliness of some readers.

Section three, ‘Beatification: God Examines the Evidence’, should have been excised altogether, or at least explicitly framed in the voice of Rumwold’s God, Kempe’s God and so forth, sparing everyone the attempted ventriloquism of a gentle bearded-guy-on-a-cloud kind of God. It’s fine to be imaginative, speculative, even sacrilegious (as a non-Christian, I’m for intelligent forms of all three), but this section undermines much of the gravitas and pathos that The Odour of Sanctity works hard to generate by abandoning any anchor in earthly reality. The sixth section ‘Canonisation Ceremonies’ also struggles to place the various popes in their own lived worlds and instead retreats into their thought processes. One reason for this is the minimalist approach to Vatican structures, hierarchies, conventions and complexities which contextualise the real-world canonisation process, still very much necessary (perhaps especially necessary) for a speculative work. Contrast this to the care and richness with which Brown treats her six subjects, on stirring display in the seventh ‘Envoi’ section, and it becomes clear why The Odour of Sanctity is a stellar, though uneven, achievement.