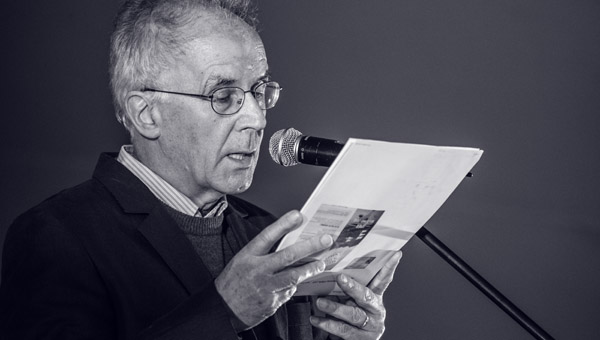 Image from The City of Ljubljana

The last time I saw Tomaž Šalamun was several years ago, at a reading at the Slovene Writers Union in Ljubljana. Of course, I was astonished to see him there – Slovenia’s most famous poet – to see his slight frame and warm smile. I can’t disagree with Robert Hass’s describing him as a saint who had just found his glasses: ‘Granny glasses, in fact, and a small, altogether angelic smile. It was a contrast between the eyes and the smile that made you look twice.’ I’d just woken from a nap on chairs inside the small hall where I was to read, having had a moment of déjà vu, realising that I was in the place described, albeit during the Cold War, in Hass’s short essay introducing Šalamun’s Selected Poems (Ecco Press), his first major book in English. The winter train trip from Vienna is much longer than its distance.

In the usual pre-reading awkwardness, Bogdan, a Romanian acquaintance, greeted my Slovene friend, a translator of German, by kissing her hand. Whether Tomaž did the same I’m not sure, though I feel he did. Certainly, I remember him addressing Bogdan, first in English, then in Slovene and French, then in jovial, conversational Romanian. Could that be right – did Tomaž know Romanian, too? He and Marjan Strojan, the legendary translator of Beowulf, The Canterbury Tales and Paradise Lost, embraced, not having seen one another for years, despite both living in Ljubljana. Small cities! The Macedonian poet Lidija Dimkovska and Slovene writer Andrej Blatnik were there. Still amazed that he and Marjan had made time to hear me, a poet from the Second Last Continent, with my translator I started to read.

Recalling all of this is not to dream myself into a literary Mitteleuropa, into the dim world of a past, wintery Ljubljana, rather to remind myself of how Tomaž was: friendly, engaging, kindly, erudite, modest, enthusiastic about others’ work and being. All qualities not as common as our world needs them to me. And this is not even to speak of him more personally, nor of his popular, experimental poems, poems that have influenced more than one generation of US poets …

In thinking of that evening and of our brief conversation afterwards, his saying how much he enjoyed the poem written as a homage to him, and of how easily he was able to express an appreciation of the Poetic, I now feel how much we have lost, those of us still in the Cult of the Poem. Tomaž, in life as much as in his poems, was child-like; his poetry was compelling, impulsive. A decade ago I went to Mexico after reading the poems he had written there. I believed he understood, better than the others there, that my poem was not only a homage to him but also to our impetuous, sinister, goddess Santa Muerta, the Latin American patroness of the criminal. Yes, despite his gentlemanly presence, he was a poet of the Wild.

Had Tomaž been Mexican I would be writing that he was a poet who wandered the Borderlands of Death. Had he been Buddhist, he might have been a painter of the illusions of the Bardo, whatever is between death and rebirth, or Enlightenment. But Tomaž was a Slovene, a famous, beloved poet, a sensitive man and a volatile, encompassing, open mind – which is to say, Tomaž Šalamun was his own kind of magic.

This entry was posted in GUNCOTTON and tagged John Mateer, Tomaž Šalamun. Bookmark the permalink.
John Mateer's books include Emptiness: Asian Poems 1998-2012, Unbelievers, or 'The Moor', Southern Barbarians and The West: Australian Poems 1989-2009. In 2011 he was invited to read at PEN's Free the Word festival at London's Southbank Centre. Currently he is working on an art project investigating the early history of the Malays of the Cocos-Keeling Islands.