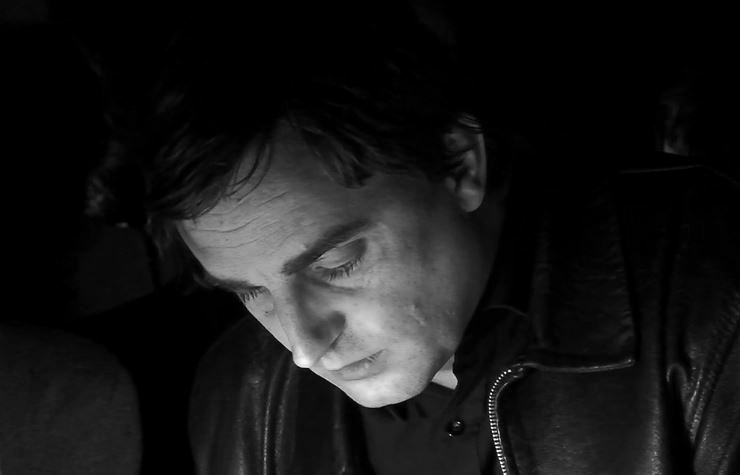 I first met John Mateer in London, at a reading at PEN International’s Free the Word! festival, where the international outlook of his poetry intrigued me. We corresponded regularly by email from that point forward, both of us often on the road, discussing poetry, translation, and travel. Mateer is a cosmopolitan poet, an international poet too little known on this side of the Pacific. His poems resonate with a deeply empathetic vision of the natural world and its inhabitants, be they Australian lizards or the translators he compares to angels, an assertion I can only aspire to live up to as translator myself.

In late 2011, Mateer and I corresponded more formally by email for this interview, which originally appeared on Molossus. In 2012, I was fortunate that our travel schedules coincided in London, where we continued our diverse discussions in person, over Indian food and beneath thousands of fluttering poetry bookmarks, dropped by helicopter by Chilean poetry collective Casagrande as part of the Poetry Parnassus, fitting metaphors, respectively, for Mateer’s warmth of spirit and for his generous sharing of experience, both in his poetry as in his person.

David Shook: You’re a poet of many places, many languages and cultures. Tell me about how place affects your work.

John Mateer: I don’t think in terms of place, language and culture – rather in terms of history: I see every place, just like every cultural act, and every person, as being an embodiment of History. I see it in almost the Buddhist sense of pratītya-samutpāda – i.e., that conditions produce phenomena – and so for me place is deeply connected with person and history. Something that means that I usually feel quite ‘familiar’ in any place … A strange talent, maybe.

That is probably a consequence of the fact that, when I was six years old, my family immigrated from South Africa to Canada, travelling there via several European cities, and then only about a year later we returned to South Africa – ‘remigrated’ as it were. I have travelled a lot in the past decade, but it was only recently that it occurred to me that much of my experience in the present is influenced by that very formative one: the feeling that places are exchangeable. That Canada is a multi-cultural and – ideally – bilingual country has strange parallels to South Africa and Australia.

In answer to your question, though, I must say that place influences the work in that the poems emerge from the circumstance of my knowledge, experience and sense of the history – one could even say Being – of the place. I’m interested in the transparency of the Self in a way that is closely related to that of the Buddhist notion of the Self as an imageless mirror. It might interest your readers to know that it was the poet Breyten Breytenbach’s writing that introduced me and, I imagine, many others in South Africa to Buddhist ideas in the way that someone like Gary Snyder did in the US a decade or two before.

DS: In our email correspondence it seems like you’re always on the move. Does that impulse affect your writing? Like Hemingway?

JM: Like Hemingway?! Not sure what to say to that. The only thing I am sure I share with Hemingway is a fondness for bullfighting!

The question of the use and meaning of travelling is related to what I said before – that it is about understanding the nature of History and how it is embodied, whether in a place, its architecture and art, its language, or in one’s Self.

One thing that I was surprised by in the last few years was the realisation that mostly my travel has been to countries where English is not the primary language. My visits to the US and the UK have actually seemed to me the strangest because there I experienced encounters where the things and places and people were different while the language wasn’t, or wasn’t really. Once I was asked which country I felt was the strangest of those I’ve visited, and had to say the US. The US is the only place where, for reasons I don’t really understand – and they aren’t for anti-American reasons – I felt ‘alien’. I just don’t feel I understand in my heart the logic of the place, its particular mix of the colonial, imperial, and its powerful – almost hallucinatory – Utopianism.

And yet I would say that I do feel some kind of emotional understanding of places as strange as Japan or China. The only way I can explain it is that the consciousness of certain ‘white’ South Africans like myself, due to the nature of the brutality and absurdity of normal life during the period of Apartheid, experienced a kind of dissociation, literally, in the psychological sense of the term, and this led – and I know this isn’t only true of me but of some friends as well – to a disconnection from those usual identifications of ‘white’ and ‘Western’.

Yet in many ways I feel European, too. I am probably more comfortable in certain places in Asia that I am in South Africa or Australia or Europe. So how do these contradictions affect my writing? It makes me very open to influences. I know that openness is often disquieting to people, perhaps especially writers, who wish not to be influenced unintentionally. I don’t feel that at all. I would characterize it in another way, by not seeing influence as something that comes from outside of one’s self, but rather that it is selfhood that comes from the outside; that in our hearts – if I can put it in such a way – we are already pure and empty. Actually this fits with the Russian linguist Lev Vygotski’s theory of childhood language acquisition and concept development. Travelling is a way of changing the Self.

There is also another dimension to this, which is that of investigation and exploration – it should be remembered that, when I was growing up in Johannesburg, Apartheid designations had it that I was ‘white’ and ‘European’, and the anti-colonial sentiments of most African countries meant that we ‘whites’ were unwelcome on most of the continent. The train carriage that I would have had to sit in in Johannesburg would have had a sign saying ‘whites/blanke’ (blanke being Afrikaans for ‘white’). I, having English as my first language read it as ‘blank’! Perhaps that is the origin of my poetics, in seeing that evil sign with a child’s innocent eyes?

DS: We met at an interesting reading, where I think you were the only writer in the up-and-coming world writers showcase that wrote in English. That’s interesting to me for two reasons. Obviously you’re a little beyond up-and-coming in your Native Australia, but your appearance on that slate suggests you’re considered an international writer. What does that mean, if anything? Do you consider your poetry more international than Australian, more world literature than English-language?

JM: I myself couldn’t, or wouldn’t, use the designation ‘Native Australia’, both for the reason that I was born in South Africa – anyway, during Apartheid the word ‘native’ only applied to ‘black’ South Africans – and because the question of nativity or nativism in Australia, or, as they would say in one of its expressions there, ‘Aboriginality’, is profoundly vexed for ‘white’ Australians – the politics of which is too complicated to go into here. Though, I recently heard someone say that the Aboriginal people of an area around Sydney – and this may be true elsewhere, too – believed that the spirit of a child infected a mother-to-be in a particular place causing pregnancy. This is an intriguing conceptualization – which relates to your first question …

To go back to that aspect of your question, in that sense of ‘native’, of place, of birth, of origin, I, to a great extent, feel South African. In terms of my education about Nature, I feel Australian. And in terms of my education about Art and History, I feel European, perhaps even specifically Portuguese. While in a philosophic and spiritual sense I am close to ‘the East’, through my readings in Buddhist philosophy, which, of course, leads us back to that philosophical Superpower of India. Am I Indian as well?! Having said all that … I must answer that I regard my work as more International than Australian, more World Literature than English-language.

Yet … again there is contradiction, because I wouldn’t set up those polarities. Just as Buddhism might be seen as a reaction, almost a political reformation of Indian religion, of Hinduism – by allowing the believer the possibility of ‘jumping the queue’ of reincarnation by being able to achieve Realization in one lifetime – that in no way means that Japanese Buddhism is ‘Indian’. I feel all these possibilities as being able to manifest within one another, within me, under the understanding that meaning is circumstantial.

It is possible for me to read a poem in English about Australia, the import of which will not be properly clear to English speakers from elsewhere unless they know Australia, or even a particular part of the continent, its history and nuances of language. Does that mean I am only an Australian poet? This is a problem Anglophone post-colonial literary theorists and historians haven’t come to terms with very well. The US context is quite different in that it is vast and very active and – may I say – sometimes self-absorbed. So US literature has more or less not needed to reflect on the instability of contextual meaning in a language as apparently transparent as World English. I see that my work, if not regarded as a unified body or corpus, is – in a way – like the corpse of a holy man of the Middle Ages: fragmented, turned into worshiped and traded relics, ‘things’ in circulation in various places and languages.

Pages: 1 2 3
This entry was posted in INTERVIEWS and tagged David Shook, John Mateer. Bookmark the permalink.

David Shook is an American poet, filmmaker, and translator. His debut collection, Our Obsidian Tongues, is out in 2013 from Eyewear Publishing in London. His many translations include Roberto Bolaño's infrarealist manifesto, Mario Bellatin's Shiki Nagaoka, Tedi López Mills' Death on Rua Augusta, and Víctor Terán's poetry from the Isthmus Zapotec of Southern Mexico. He served as the English PEN Translator in Residence at the 2012 Poetry Parnassus at the Southbank Centre, part of the Cultural Olympiad leading up to the Olympics. There he screened his documentary Kilómetro Cero, about poet Marcelo Ensema Nsang,covertly filmed in Equatorial Guinea in 2011. Shook lives in Los Angeles with his wife, where he edits Molossus and Phoneme Media. Learn more at http://davidshook.net

View all posts by David Shook on Cordite →