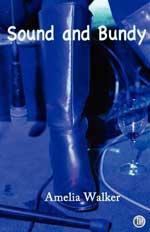 Despite some superficial problems with this book, it is a special, unusual, and highly satisfying read. The unidentified typo/misspelling/creative spelling interpretation in the title of Pete Lind’s Token Bukowki Poem, and the ugliness of the physical book with its shiny purple cover, ugly font, cheap stock, bloated shape, as well as the seemingly ambiguous presentation of the text as a coherent work of literature (Hang on, are all the poets fictional? Oh! This whole thing is written by one poet!) all fail to do justice to the poems or the stories they tell. Arguably, perhaps, the ambiguity behind the text’s presentation is actually useful in telling the story of these three poets, and in achieving suspension of disbelief in the reader.

Walker creates the three characters by giving each of them distinctive poetics, adding only short introductions to each poet at the beginning of each section. It is up to the reader to find correlations between the poems to work out the nature of their relationships and the incidences leading up to Lind’s/Siver’s ultimate suicidal end. This is a unique kind of story-telling through verse. It isn’t epic in form, nor do the poems work to relay a complete narrative. Walker allows the reader to enter the worlds of her characters without any discernible narration.

The character Peter Lind’s poems are captivating. They aren’t perfectly crafted. In fact, they’re a bit of a mess. The rambling stream of consciousness rant in Melbury Street, parts of which might otherwise have been cut in editing, illuminate the emotional and psychological complexities of memory and the significance of place. There is a beautiful satisfaction in the contradiction of the lines, ‘She says I don’t understand / and I say, No Shit.’ An inherent empathy and deep sense of knowing – knowing a lover, knowing another person’s needs – is expressed throughout the poem, ‘My Monsoon Missus 1999’. At its core, this is a poem about acceptance and the reckless abandon of being lost in the darkness of love and mental illness (the poem suggests those two things are basically the same) with somebody.

The character Shannon Woodford’s poems are less captivating, perhaps, but they are tender and occasionally strike at the heart of some personal truth. I get the sense that Woodford, the mother of Lind’s children, was the less brilliant one of the group, but that she wanted to join in and appear intelligent. Why the parenthesized delineations of form beside each title? We know what a villanelle looks like. In fact, the communication of meaning in Woodford’s formal poems is inhibited by end rhyme schemes and meter, which do not help to punctuate and elucidate their meanings. Her free verse poems, however, show some natural affinity with formal technique. In ‘The Australian Dream, 2005’, for example, the light hearted irony in the carefully placed asterisk in the lines, ‘i’ll use the credit card to pay those bills / and to buy those shakes from TV. / Success guaranteed!* Plus a free book on diets.’ Similarly, the physical representation offered by the use of parentheses in Eating, 1997, ‘Eating is not an activity / but a place i take myself: / a cave where nobody can find me / (even me (especially me)).’