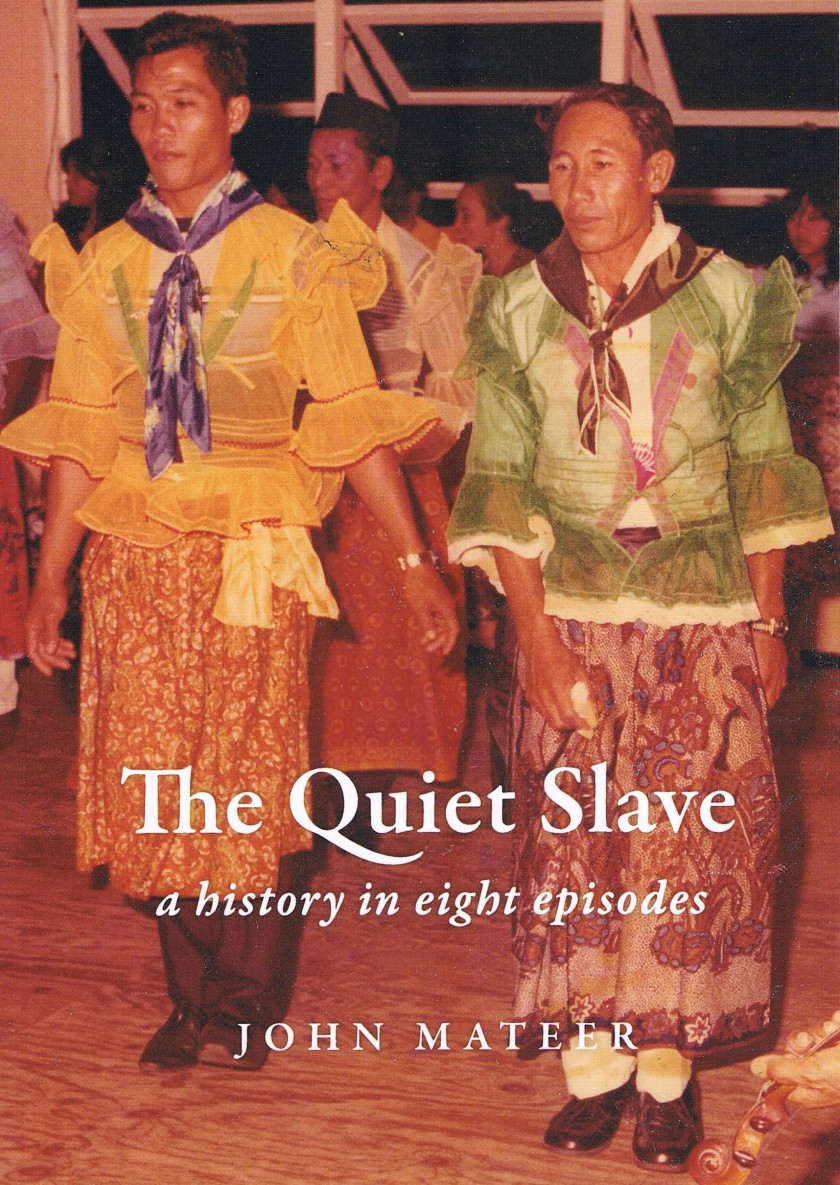 The Quiet Slave: A History in Eight Episodes by John Mateer
spaced 2, 2015

A defining scene in Pramoedya Ananta Toer’s historical novel, Arus Balik (Cross-currents), portrays the moment in 1511 when colonial power came to the Southeast Asian archipelago. In the following passage about the fall of Malacca, Pramoedya presents a society unaware (or ‘becalmed’ as Pramoedya puts it) of what is about to confront it:

The Portuguese armada had anchored far out to sea, at a great distance from the port. The morning sun shone through the crimson mist all over Malacca. The sails of those ships …well, the situation for the locals was grave. The masts of those ships rose through the fog. And the newly risen sun burnt onto the earth’s surface. Its rays reflected onto the surface of the water, which was moving sluggishly. Far from the port of Malacca, vessels were becalmed, drifting lazily from wave to wave. Only the small boats displayed any sign of life. And if you had a bird’s eye view, you would see the thatched, slightly-raised roofs of the port. And you would be able to make out the yellow lines of the roads. And a few men wandering about. The round hatches in the sides of the Portuguese ships had opened. The barrels of the cannons sprang out. And it is said at this point there was a shout in unison, Cannon! Cannons—cannons thundered. Fire spat out from them. Bullets, eye-like iron balls, flew into the air, heading for Malacca … It was 1511. Alfonso d’Albuquerque invaded and occupied Malacca (my translation).

As Pramoedya goes on to show, Malacca was a cosmopolitan port, a beneficiary of many hundreds of years as a trading centre, a characteristic which was amplified after colonial intervention. The next several hundred years would see the structure of feudal societies, particularly those on the coastlines, brought to new levels of hybridisation: ethnic origins became more complex and, under the edicts of the colonial authorities, racial codification became more prescriptive.

The advent of the Portuguese, and later the Dutch and the British, brought new elements into how and where the local peoples would live. Pramoedya’s novel explores the major historical events which continued to influence the region: the legacy of colonialism and the emergence and growth of Islam, which in Java was initially in the northern coastal towns, where Arus Balik begins.

So far, Arus Balik remains untranslated into English, but recently a contemporary author has uncovered similar territory, although set in the nineteenth century and with its geography centred principally further north, in India and China. In Amitav Ghosh’s superb Ibis Trilogy, we encounter what the author has described as the momentous event of the British victory over China in the opium wars of the nineteenth century, and in the establishment of Hong Kong – a victory which, like the event in Malacca, resonates today. As in Pramoedya’s work, Ghosh introduces a series of characters whose lives (in this case) are determined by the drug-running British control of the opium trade, from the poppy-growing areas of India, to its destination in southern China in what was then Canton. And like Pramoedya, Ghosh depicts these characters as people fighting against the odds, and, through sheer pluck and determination involving sea travel over vast distances, trying (with varying degrees of success) to make a life for themselves.

It is this quality of ‘a made life’ that is most expressed in John Mateer’s recent work of fiction, The Quiet Slave. Roughly contemporary with the historical setting of Ghosh’s work, the novel depicts another group of hapless people subject to the vagaries and eccentricities of certain colonial figures, a situation familiar to us through the fiction of Conrad and many others. The Quiet Slave, although published as a work in its own right, was initially an installation exhibited as part of spaced 2: future recall at the Western Australian Museum, Perth, in February and March 2015. In this project Mateer has explored what has been the sketchy history of a particular ethnicity, the Coco Malays, some of whom have settled in Katanning and other towns in Western Australia, while others have remained in the Cocos Islands. It is a project which shares Pramoedya’s and Ghosh’s research into lost histories, but the novel (which includes many photographs from the Home Island Museum, Cocos) is primarily envisaged as a gift to the descendants of slaves who were marooned on the Cocos Islands in the nineteenth century, and abandoned by their owner. The background to the narrative concerns how a group of people with different origins in the region ended up in this remote location under the control of one of those most conflicted representatives of colonialism, Alexander Hare.

Although the name of John Clunies-Ross is generally associated with the settlement of the Cocos Islands, Hare was, as Mateer points out, an earlier and generally forgotten occupier. Hare, a friend of Raffles and once an influential player in the region, had become persona non grata there, and with a group of slaves he could no longer sell due to Anti-Slavery legislation, took his charges on what seemed like a journey without end. These slaves had made a journey, first from Malacca, once a significant trading port, then to Java during the British Interregnum, then to Cape Town where the formerly domestic servants were forced to work the land in bitterly cold and harsh conditions. Finally, they arrived on the Cocos Islands, where Hare’s options were extinguished, and his only recourse was to fantasise about a possible return to Malacca, or Java.

Other than the exploration of a similar historical period in The Quiet Slave and The Ibis Trilogy, Ghosh and Mateer share a similar interest and excitement in the diverse languages which float through this most polyglot of regions. Ghosh brings into the trilogy a great play of languages, with local languages often coalescing with English usage, whether it be by mem’sahibs or sailors. Mateer presents his acknowledged commitment to translation by providing both an English and Malay text, and also including some Jawi text in the gallery installation.

In relation to Jawi, a language once widely used in the region, Mateer has discussed how the practice of Jawi on the Cocos Islands came and went over time, depending on a number of cultural and educational factors. That letters and other documents written in Jawi could be found in the Imam of Cocos Islands’ Centrelink office cabinet is bizarre, and appears as a kind of cosmic joke about history as image maker, where cultures flowing and transforming as they do, may end up discovered in the most unlikely of places. As Mateer pointed out in a 2015 broadcast for ABC Radio National and in a seminar at the University of Western Sydney, it also encapsulates how lost histories and languages contain both absence and the possibility of recuperation within their very inaccessibility.

The Quiet Slave is a document designed to be accessible to a community with mixed literacy levels. It is written in clear, simple prose in the voice of Rosie – second wife of Hare and a slave born into captivity, as was her mother before her – and includes a brief historical overview at the beginning of each chapter. Rosie’s voice is circumscribed by her experience. She has travelled involuntarily, and seen much, but her voice can only inhabit what has always been her enslaved condition. On Cocos, where they arrived in 1820, Hare’s personal desperation revealed itself in bizarre behaviour. He settled on the very tiny atoll, Pulau Beras (Rice Island), imprisoning the women at night in an area under his house. In this prison, Rosie only has available to her nostalgia: nostalgia for a more comfortable past as a household servant in both Malacca and Java. In Malacca she experienced the comparative freedom of visiting the town and hearing the many languages that floated down the streets and alleyways of the port. She exhibits a love of languages, and their diversity represents for her a freedom for which she longs:

And she had been born in the great city of Malacca, with its markets, and traders and ships, and all those voices: Malay, Portuguese, Arabic, English, Javanese, Dutch, and Hindi: a wonderful babble.

Pages: 1 2
This entry was posted in BOOK REVIEWS and tagged Amitav Ghosh, Jennifer Mackenzie, John Mateer, Pramoedya Ananta Toer. Bookmark the permalink.
Jennifer Mackenzie is a poet and reviewer, focusing on writing from and about the Asian region. Her follow up to ‘Borobudur and Other Poems’ (Lontar, Jakarta 2012) ‘Navigable Ink’ (Transit Lounge) is forthcoming in 2020.