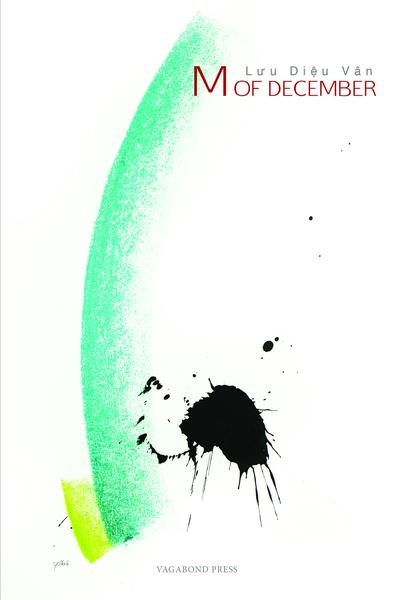 Reading M of December is rather like going to a spectacular exhibition at a gallery where images of all kind swirl, proclaim, collide and re-form – the viewer takes the opportunity of a brief leave to attempt to come up with a coherent response. Having gone into this gallery, and exited on a number of occasions, what I have come up with is a response to the formed fragmentation of its individual poems, travelling through discordancy via the robust vigour of forceful lines and sharp elisions.

In the first section of the collection, ‘December’, individual poems read as constructed assemblages with dazzling juxtapositions of imagery. In ‘B.C. bees’, perception is presented as molten, contested, as chthonically and chronologically unsettled:

The artist at work then makes a selection process by constructing a verbal installation:

This sense of poem as installation, or constructed artefact, is also on display in ‘micro exhibition’, where images of the artefact and that of the natural world play off each other, reflecting both boldness and uncertainty – wonderment in the faith of what the poet has created. The poem starts out with a strong image:

The imposing nature of the image could be seen to conflate into the act of perception itself:

This culminates in the final verse, where the act of writing itself presents ambivalently:

Essentially, Vân works herself out of hesitation; boldly placing the natural and the constructed to achieve a momentary interlocking of effect.

In ‘imaginary holy friend’, the robust somehow distils itself into an evocation of lyric, socially sanctioned violence. Here, the gendered de-formations of ‘people playing god’ merge into a joint reflection of the abused body and nature, with the short lines being particularly effec-tive:

The poem ‘inside an armoured chrysalis’ pursues the vision of metaphysical clash in its expressionistic and apocalyptic tableau of war:

Its imagery is strong and confrontational, for instance: ‘stench of fresh fir’, ‘molecules of gassed up bodies’ and ‘thinning polyskies of barebones and sulking skulls’. The delicacy (and the shorter line) seen in ‘imaginary holy friend’ effectively returns in the final two lines, playing out the metamorphic import of ‘chrysalis and caterpillar’:

The section, ‘December’, continues with an enthralling juxtaposition of imagery from nature, the world of objects, and the body, all morphing into each other in unexpected combinations. ‘coiling forest’ presents a take on the Cinderella story, of ‘tales of a princess always needing rescues / of a prince.’ Vân portrays a set in motion, in which ‘a vanishing forest [is] coiling into itself’ and ‘doors are pushing upwardly silently within the forest like wild / mushrooms.’ The poet abruptly segues from this protean vision, into savage reflection:

In a similar vein, ‘melancholia of caramel afternoons’ moves from the mythical to the contemporary with spectacular elision:

The second section of the collection, ‘M’ is akin to work seen in Poems of Lưu Diệu Vân, Lưu Mêlan & Nhã Thuyên (Vagabond Press, 2013), extending Vân’s poetry both in theme and imagery, nailing the acerbic line. ‘to a younger poet self’ and ‘naïve writer’ respectively look back in sardonic reappraisal: of, firstly, an early love affair; and, secondly, of early flurries onto the literary circuit. In ‘to a younger poet self’, the ‘Big Heartbreak’ is framed with literary reference:

Its references morph into an effectively crafted take on writing and the body:

‘naïve writer’ also sees the collection open itself up to some narrative savagery. In Vân’s view, literary PR appears as the selling of self, where ‘the writer’s skin must be as thick as their copious flows of / topless appearance on the fictional bed’, this ‘literary reception / bed, on which not a single space is deserted’, from which the speaker is suddenly excluded, ‘forever trapped outside’.

Pages: 1 2
This entry was posted in BOOK REVIEWS and tagged Jennifer Mackenzie, Lưu Diệu Vân. Bookmark the permalink.
Jennifer Mackenzie is a poet and reviewer, focusing on writing from and about the Asian region. Her follow up to ‘Borobudur and Other Poems’ (Lontar, Jakarta 2012) ‘Navigable Ink’ (Transit Lounge) is forthcoming in 2020.