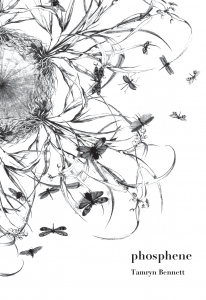 Lisa Brockwell’s Earth Girls and Tamryn Bennett’s phosphene are both compelling first collections in their own right. Reading them side-by-side, however, an equally compelling contrast emerges. Where Brockwell looks for clarity and direct engagement with her audience, Bennett invites interpretation, offering many clues and few concrete answers. This contrast reveals something else: the strengths of one approach do not threaten, or cancel out, those of the other.

In an interview with Northerly editor Barnaby Smith earlier this year, Brockwell outlined her approach to writing poetry: ‘Accessibility is a priority for me, but not at the expense of intelligence, nuance or complexity,’ she said. ‘I want my poems to be accessible, but by that I just mean that I want a reader to be able to engage with the poems, to find something there. That doesn’t mean the poem is easy, or able to be explained.’

This balance is clear in every one of the poems that make up Earth Girls. Often it’s Brockwell’s titles that do the heavy lifting, spelling out a subject and allowing the rest of the poem to move freely around it. ‘On Becoming a Housewife for the First time at the Age of 41’, for example, begins:

I learn to cut up a melon, though remain unable to bring a knife to a whole chicken. I save small lizards from the dogs. I find myself on tuckshop duty with my dearest friend; at university we didn’t see this coming.

In other poems, such as the short, seething ‘Honey’, it’s the slow reveal of a story that holds our attention:

In her interview with Smith, Brockwell explains that Earth Girls brings together seven years’ worth of work. The care she has taken in choosing pieces for the collection is obvious. With the exception of one or two minor poems, most are strong enough to hold their own ground. More than a few offer the satisfying jolt of an original comparison: ‘Window box platonic’ for example (‘Waiting for the train’), or ‘tambourine / of wind in trees’ (‘When I run’).

The two-part poem ‘Laika and Oleg’ is one of the high points in the collection. This is a moving account of the fate of the dog Laika, the first living creature to orbit the earth, and of the man who selected and trained her:

It’s an unflinching poem, almost bruising to read. There are points when it’s tempting to stop altogether, but Brockwell leads us gently forward through Laika and Oleg’s story.

Brockwell consistently combines line breaks at natural pauses, with those that draw the reader down to the rest of a phrase. This technique creates a steady rhythm that supports her exploration of other difficult subject matter. For example, the three-part poem ‘Uluru’ – another crest in the collection – begins with characteristic openness: ‘Three days after my middle miscarriage / we went to the desert.’ Further into the poem we see another of Brockwell’s strengths: her insistence that her poems share personal experience, then stretch beyond it:

In her acknowledgements Brockwell mentions contemporaries including Judith Beveridge and Dorothy Porter – two poets with a breathtaking ability to communicate both lurking menace and joy in apparently everyday subjects. At its best, Earth Girls reaches toward these unspoken things with the ‘lucidity’ Porter spoke about in her 2001 Judith Wright memorial lecture. ‘Lucidity can write with a tongue of fire,’ Porter said. ‘Often it’s a sense of urgency, a sense of dire times, that can make a poem searingly lucid.’

While Brockwell’s subjects generally remain close to home (her poems on the aftermath of Japan’s 2011 tsunami and the amusing ‘Jennifer & Angelina’ notwithstanding) this ‘sense of urgency’ is achieved on a local scale. Again she pushes beyond personal experience into wider social observations in the ekphrastic series ‘Point of View,’ which responds to the work of Tasmanian landscape artist Philip Wolfhagen. At one point, the speaker expresses her relief that the painting in front of her is not:

The points where the collection could be stronger – and they are rare – occur when Brockwell strays beyond clarity into over-explication. Indeed, it’s the polish in the majority of the poems that makes a meticulous reader itch to pull out a word here and there. For example, the lines ‘Sitting / on the rocks in her swimming costume, / her hair wet and loose down her back’ (‘Seaworthy’) are enough to complete the picture without the next line: ‘a woman who has just finished her swim.’ Similarly the qualifiers in these lines could be left out: ‘For me, it’s after the harvest, only just / but even so, a different season’ (‘Waiting for the train’).

While Earth Girls generally adheres to structures and themes familiar to readers of Australian poetry today, Tamryn Bennett’s phosphene occupies an entirely different space. This is the fourth book in the Rabbit Poets Series published by Rabbit: A Journal of Non-fiction Poetry, adding to collections by Jordie Albiston, Tim Wright and Geraldine Burrowes plus three more debuts launched with Bennett’s collection. It continues editor Jessica L. Wilkinson’s exploration beyond the bounds of the poetry we’re used to – bringing attention to the experimental, and testing the limits of nonfiction.

Pages: 1 2
This entry was posted in BOOK REVIEWS and tagged Alice Allan, Lisa Brockwell, Tamryn Bennett. Bookmark the permalink.
Alice Allan publishes the podcast Poetry Says where she interviews poets from Australia and overseas. She also runs the Melbourne reading series Sporting Poets. Her work has been published in journals including Rabbit, Southerly, Australian Book Review and Westerly, and shortlisted for the Blake Poetry Prize.