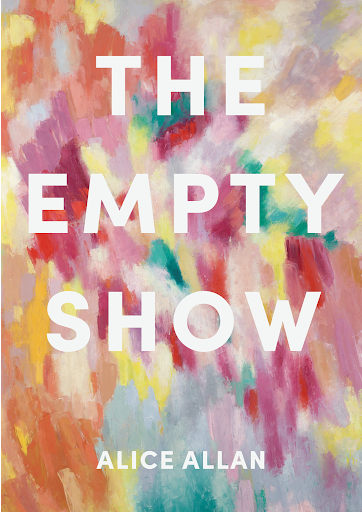 Alice Allan’s debut collection opens with the declaration, ‘A sonnet is always a love poem.’ Absolute statements like this tend to attract consideration of their opposites, gesturing to their qualities and equally calling to mind all that they are not: always/never, empty/full, lost/found or wrong/right. But in the poem ‘Melbourne sonnet’, after this declaration, the speaker immediately retreats with ‘So I was taught’, retracting their initial conviction in favour of the comfort of the murky middle ground. Throughout the collection, Allan ruminates on what it is to be lost. She asks and attempts to answer how one knows they’re lost, how to travel from lost to found, and, then, whether there really is a difference.

The collection’s title, The Empty Show, references a guerrilla art movement from the early 2000s, where organisers converted abandoned buildings into secret art galleries. This, combined with the photographs of lost and found signs peppered between the poems, lend the collection a sense of urban listlessness, a tone of wandering through city streets searching for something. One in particular reads ‘LOST (?) RABBITS SPOTTED HERE … Too fast to catch!’ The poster’s hesitation to label the rabbits lost introduces the complexity of lost and found where it’s not always clear whether something or someone is lost and needs finding.

Many of the poems are written after another’s or feature interjections from other texts, including Auden’s journals and Love Actually (2003). The huge variety of the intertextual references demonstrates Allan’s eclectic reading habits but, within the wandering world of the collection, they stand out like signposts, disparate texts chosen for their unique messages. In this way, reading the collection and encountering the references feels like a web of interconnected messages and maybe, just maybe, if you can string them together correctly, they’d reveal a hidden message, a larger scheme with which the poems’ lost speakers could direct themselves. But, at the same time, the great variety in tonal and formal choices between the poems creates a scattered reading experience, making it difficult for the reader to gather their own bearings in the collection.

In the more experimental poems where Allan works with word repetition and shapes, she appears to be working to construct a voice for the collection. For example, ‘Lyric’ is a column of ‘I’ repeated 196 times. It is a visual assertion of the central perspective for the reader but could also be read reflexively as a reassuring mantra. Additionally, in ‘On the threshold of the hive’, composed with words from Sylvia Plath’s ‘Stings’, Allan shows the shift from someone watched to someone performing as a reclamation of self.

The transformation from ‘third person is watching’ to ‘persona’ seems like the speaker wresting control of their perspective and reclaiming the gaze of the third person but, as the language continues to dissolve, the barriers between the third person with their gaze and the speaker of the poem become muddied, becoming indefinable sounds. From here, the central figure remains hazy, with an uncertain sense of self.

Similarly, in ‘Geraniums’, the speaker’s uncertainty about herself is revealed in the relation to another person:

She has experienced something significant in overhearing a woman while walking but, while she is confident in the personal value of this message, she is less confident about its value to others. Against the insistence of self from ‘Lyric’ and ‘On the threshold of the hive’, this poem reveals a vulnerability and a lurking feeling of self-doubt that the other poems are attempting to shake off. These poems together show Allan’s interest in construction of self with the added complication of the dangers of ‘losing yourself’ to uncertainty.

Pages: 1 2
This entry was posted in BOOK REVIEWS and tagged Alice Allan, Julia Clark. Bookmark the permalink.
Julia Clark is a PhD student, poet, and reviewer based in Sydney, living on Ku-ring-gai and Darug land and working on Gadigal land. Her criticism and non-fiction have appeared in Archer, Rabbit, and Audrey Journal while her poetry has appeared in Scum and ARNA. If she’s not reading or writing, she’s at the theatre.