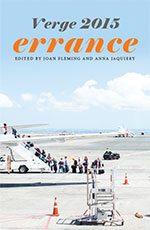 The Australian poetry scene, however you define it, is definitely thriving. So much so that it sometimes causes consternation. Perhaps you’ve been there at a poetry gathering or launch when someone wonders aloud whether, ‘thriving’ is one step removed from ‘overgrown’ – whether this healthy scene is actually in need of some ruthless pruning.

Is it shyness about the work poets do that prompts this worry about ‘too much’? After all, we don’t worry that there are too many baristas, accountants or florists. Whatever the reason, the concern about an overgrown scene is somewhat useful in that it underscores the role of our editors as Head Gardeners.

Rabbit, Verge and the newly launched Cuttlefish each come from different corners of the garden. Rabbit was established in mid-2011 by Melbourne poet Jessica L. Wilkinson, while Verge has been part of Monash University’s creative writing program since 2005. Cuttlefish, hailing from Western Australia, brings together poetry, short fiction, flash fiction, and (like Rabbit) features one artist’s work throughout. In each case, it’s clear the editors have grappled with the challenges a flourishing poetry scene presents.

In her editorial to the biography-themed issue of Rabbit, Wilkinson is unapologetic about her decision to include enough work to fill two parts. Issue #15 brings together biographical poems on historical figures, while Issue #16 collects mainly autobiographical poetry. But far from resulting in two overlong, overindulgent issues of Rabbit, the double-issue seems like a culmination – one of those moments when a theme connects with a poetic community and the work is charged with the energy of that connection.

Regular Rabbit readers will know how tempting it is, in any issue, to skip straight to these last few pages where each contributor responds personally to a question related to the issue’s theme. In answer to the question she poses this time, ‘What can poetry offer to the writing of a life?’, Wilkinson writes: ‘Poetry can help us to inhabit a life that has been lived, in all its weird and playful glory.’ ‘Weird and playful’ is a useful phrase to keep in mind in approaching both halves of the biography-themed issue. The first begins with Kent MacCarter’s ‘Constanze Weber Steps Off Amtrak’s Super Chief Passenger Train in Los Angeles and Fears She Has Disembarked at the Wrong Station’. The poem spools across nearly eight pages, hilarious and mystifying:

This first poem alone is dense with intriguing references, from those connected with Weber, to the seemingly disconnected Redondo Beach, The King of Marvin Gardens (a 1972 film starring Jack Nicholson) and a certain ‘Mr. Brainwash’ who ‘chows his own/underpants down’. ‘Constanze’ sets the scene for the work that follows – these poetic biographies are as complex and collage-like as an accurate representation of life demands. Further on we find Benjamin Laird’s excerpt from ‘The Soul of Letters’, a biography that makes use of lists, blanks and superimposition to create a poem in which multiple stories vie for the reader’s attention. Carmine Frascarelli’s ‘New notes from old bones (The inspiration of Eric Dolphy)’ takes a similar approach, playing with everything from capitalisation to kerning to word fragments to tell its story of a life. In both cases, freedom of form allows the poet to show that there are only ever moments of clarity in life – mess and movement are much more common than a linear biography suggests.

That said, there are also poems here that use more traditional forms to create biographical work that is just as effective. Shari Kocher contributes excerpts from her verse novel Sonqoqui, a poem titled ‘Unwritten Field Notes: Peru & Argentina, 1998-1999’, which uses ‘the imagined voice of Dr. Constanza Ceruti, the only female high-altitude archaeologist in the world’:

Rabbit’s stated goal has always been to publish ‘non-fiction poetry’ but Wilkinson isn’t precious about how this unfolds, instead encouraging her contributors to ‘explore and interrogate the boundaries of non-fiction writing’. In staking out this territory, Rabbit has also created a space that hums with the energy of experimentation, where curiosity is much more important than a correct answer. At the same time, Rabbit is by no means an untamed part of the Australian poetry garden. There is a consistency to the quality of the work that shows rigour and care, balancing Wilkinson’s enthusiasm to see poets stretch and test limits – all the better, in the case of the biography issue, to represent what she calls ‘the dynamic, shifting, multiple’ qualities of a life.

As Rabbit moves into autobiographical territory in Issue #16, the rate of experimentation with form slows as the poems become more personal. The journal’s banner of non-fiction poetry means this collection of work stares back from the page undefended. As Wilkinson says, ‘lines are presented not only as attempts of poetic craft, but of non-fiction writing itself’. Siobhan Harvey’s ‘The Charm of Cloudboy’s Transformation,’ in which she tracks the discovery, effects and eventual medication of a condition in her son, is just one example of the generous, unguarded writing collected here:

Reading the work in this issue, Lyn Hejinian’s Writing Is an Aid to Memory comes to mind. Along with the generosity shown by the poets here, there’s also a sense of discovering details as the poem takes shape – moments that are sweet, devastating, mundane and transformative. The issue culminates with a biography of a very different sort, Stuart Cooke’s ‘Pinatubo Volcano’. This poem stretches across 20 pages in long, widely spaced lines that suggest layers of rock. Here again there’s the sense of a poem given space enough to reach its potential, in this case the surreal, almost terrifying voice of a volcano as it erupts:

Along with allowing poets the freedom to discover how far non-fiction poetry can be taken, Rabbit is also very much connected to a conversation about the practice of poetry today, through its interviews with poets like Kenneth Goldsmith, Jordie Albiston, Ania Walwicz and Robert Sullivan. In this issue, Irish editor and poet Alan Jude Moore neatly sums up some of the anxiety around the work of creating contemporary poetry, and offers his take on why this anxiety is ultimately irrelevant:

despite us defining [poetry] as a charity or a victim, making it a vehicle for our nefarious desires, atavism, nationalism, despotism and any other ism you can think of, despite all of our ham-fisted interventions it carries on and will carry on.’