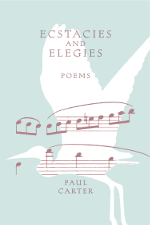 If Paul Carter’s debut collection opened with a dedication, perhaps it would read, ‘For the gaps in history and those that have tried to fill them.’ Threaded with Carter’s critical work on the palimpsest of public spaces, Ecstacies And Elegies creates a fabric of human traces that patches the holes in our histories. From myth and exile, to design ecology and radio static, Carter’s poetics is archaeological, piecing together the hidden maps and inventories of existence

In the first poem, ‘New Quinces’, Carter constructs an orchard so detailed it reveals ‘a fifth dimension in the world of fruit’. This sweeping diorama is dedicated to the late poet and librarian, Barrett Reid, and is set in a kind of imperfect Eden:

This garden of exotic and bruised fruits mirrors the grounds of Heide, the home of modern art cultivated by John and Sunday Reed, and where Barrett Reid lived from 1982 until his death. Heide remains a place coloured by the history of the artists and writers that have inhabited it, amongst them Sidney Nolan, Joy Hester, Mirka Mora, Albert Tucker and Arthur Boyd. Drilling into the memories of the garden, floorboards and twisted bed sheets, Carter’s poem escapes the confines of rhyme to reflect more closely the tangled relationships that Heide housed. Digging in this artificial paradise, Carter searches for traces of Reid’s imprint on the ‘outer rind of history’, a place where imagination grows wild and lumpy like quinces; a place where Reid has become a mark on the furniture rather than a name in notes, and where the question of gapped histories begins again.

Themes of Eden and ego recur in ‘Ardea’, where dense alliteration and periscopes are used to uncover clues to the past:

Carter fills centuries and huddled streets with forgotten feathers, flames and dreams. This microscopic attention to detail manifests a dimension where time and space can simultaneously encompass the first footsteps and the final cut. Carter’s poem seems to refer to the Ardea species of heron. With this in mind, we can see his Ardea continually metamorphosing and rising above ruined empires, all-seeing, observing human failures through a kind of compound eye. This eye collects and collages ordinary markings as it rows ‘into the backlit sky’. Despite its cinematic potential, at times the density of such compressed detail leaves little ‘space’ for exploration. That said, Carter has much to cover – cosmic playgrounds of gods, crumbling cities and the slow curve of grief.

In ‘humdrum (on the fearful imminence of reality for Horst Trossbach)’, Carter compresses the history of honey and the slow collapse of colonies. This refined architecture overthrows the ‘orthodoxy of fixed dimensions’. So we dip again into myth: ‘Tartarus, place of bone’ where backyard sailors and Noah’s Ark are shipwrecked en route to new islands. In these depths the layers of civilisation continue to decay, taking with them the past and the future, the bees and their keepers:

These slow losses of faith and fauna are observed in obsessive detail and at last the grieving for glass towers and lost landscapes gives rise to the hope of restoration. With the precision of a clockmaker Carter cuts complex systems in half so we can watch their mechanisms in slow motion; as if, timed just right, this elegiac assemblage of broken pieces will repair what’s been ruined. The losses Carter documents are often those history neglects or forgets to mention; lucid dreams, the letting go of childhood, the gravity and growing of everyday existence. Again, in ‘Red Shift’ loss is inevitable and intensely personal:

By itemising the losses in relationships, Carter constructs an alternate reality, a reality where an inventory of all occurrences can surely cure absence. Despite painstakingly vivid memories, there are emotions, like comets, incapable of being enshrined and kept safe in cubes of air. At times such ornate attempts to plug history’s holes are suffocating, leaving the reader little space left for interpretation or imagination.

Pages: 1 2
This entry was posted in BOOK REVIEWS and tagged Paul Carter, Tamryn Bennett. Bookmark the permalink.
Tamryn Bennett is a poet and artist. Since 2004 she has created artist’s books and comics in collaboration, exhibiting works in Sydney, Melbourne, Switzerland and Mexico. Her poetry and essays have been published in Nth Degree, The Drunken Boat, Mascara Literary Review, English in Australia, ImageText and various academic publications. She has a PhD in Literature from UNSW and is currently Education Manager for The Red Room Company.