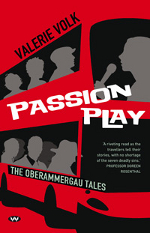 Invoking Chaucer’s Canterbury Tales, in structure and with a ‘motley crew’ of pilgrims, Volk’s Passion Play: The Oberammergau Tales assembles a cross-section of modern society cloaked in secrecy and scepticism. Where Chaucer’s travellers are drawn together by a story-telling competition, Volk’s pilgrims are united by a four-day bus tour to the German town of Oberammergau for the ritual of the Passion Play. Every tenth year, since 1634, Oberammergau has staged this event of epic proportion to honour a plague promise:

Volk succeeds in recasting Chaucer’s medieval crew, now ‘a school principal’, ‘a much-married socialite’, and ‘a TV evangelist’. But it isn’t religious devotion that compels these pilgrims, rather a web of guilt and longing that ignites their search for salvation. Each of Volk’s pilgrims has a secret past; a past that forces them to question their future. For Caroline (The narrator), an unrequited romance; for Douglas (The Knight’s Tale), a question of forgiveness from the wife he’s betrayed and the bastard son he’s hidden for 20 years; and for Elinor (The Prioress), uncertainty of thawing a hardened heart.

Pushed by her boss (and bed friend), Caroline journeys to Oberammergau under the guise of a travel feature – a foggy pretence that even her fellow travellers begin to see through as she digs into their motivations for making the trip. With Caroline trawling for stories the Oberammergau cast turn inwards, confessing in a series of dramatic monologues that chart a path from The Knight’s Tale to The Parson’s Tale. These monologues plumb the depths of human experience, though at times narrative pace is given preference over the potential to linger in imagery, as in Elinor’s confession;

These ‘dream-time clouds’ spark a desire to climb into Elinor’s subconscious, to see her stripped of the façade she hides behind in waking, to trace the fault-lines and frailty that make her human. Yet Volk is careful to not to let her characters or audience wallow in storms of remorse. Instead, fervent questions connect and drive the narrative confessions, offering windows into the complexity of Volk’s modern pilgrims and their journey for answers.

Death also ties Volk’s other cast members to the tour. Through tales of grief and guilt, Francis, the wine merchant, is knotted to Stephen, a scientist who wrongfully accepts a research award following the loss of his colleague. For Luke, the death of his mother means the opportunity to collapse his father’s career, while The Wife of Bath’s stand-in recalls the ghosts of three husbands and the gradual vanishing of her identity with them. These questions of identity serve as reminders of our temporality – reminders that our preoccupation with carefully constructing our selves and our stories will one day disappear. We are reminded that history is only ever in our hands for a moment as Caroline closes

This entry was posted in BOOK REVIEWS and tagged Tamryn Bennett, Valerie Volk. Bookmark the permalink.
Tamryn Bennett is a poet and artist. Since 2004 she has created artist’s books and comics in collaboration, exhibiting works in Sydney, Melbourne, Switzerland and Mexico. Her poetry and essays have been published in Nth Degree, The Drunken Boat, Mascara Literary Review, English in Australia, ImageText and various academic publications. She has a PhD in Literature from UNSW and is currently Education Manager for The Red Room Company.