Jennifer Mackenzie visited Mandalay, the second largest city in Burma, and its last royal capital, to attend the second Irrawaddy Literary Festival, where she was a featured poet. 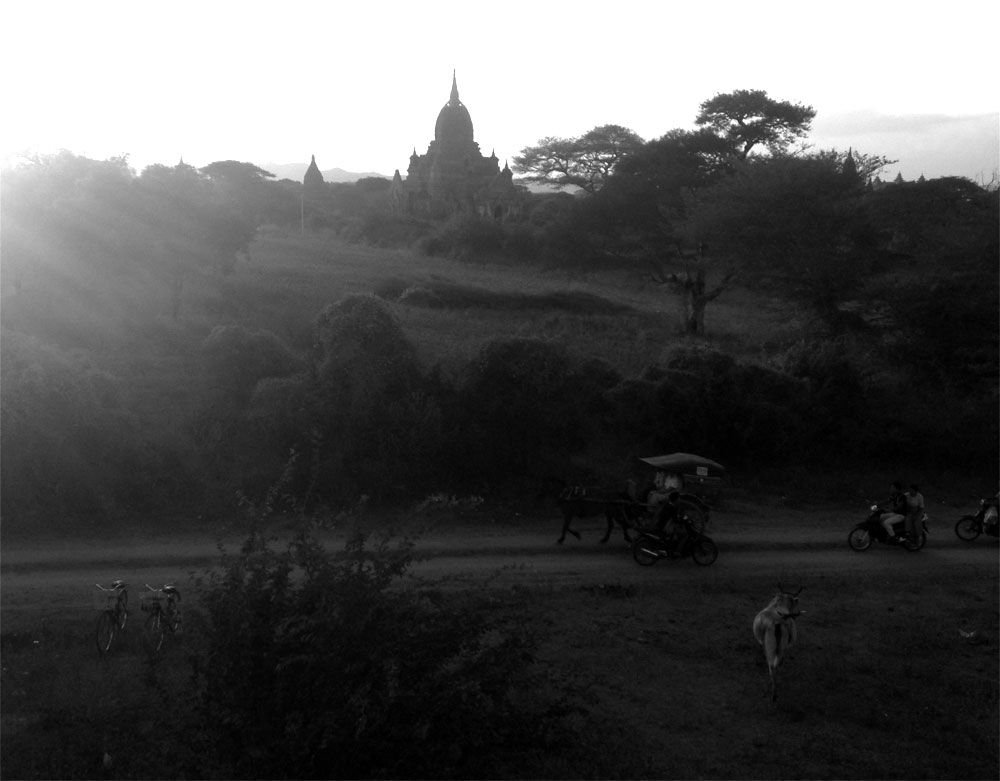 Stepped out at Mandalay airport, a good 40 minutes’ drive to Mandalay.

Bare dry landscape with the odd splash of colour from planted flowerbeds.

Shared the bus ride into town with Jung Chang, author of Wild Swans, Sudah Shah (The King in Exile), Peter Popham (The Lady and the Peacock) and Dr John Casey. Casey is from the renowned mentor of Pascal Khoo-Thwee, author of the exquisite From the Land of Green Ghosts. As we motored past the road posts, John said here they measure not miles or kilometres but FURLONGS! He said he’d once been directed to a local post office as being ‘two furlongs away’. A large friendly town dominated by the moat-encircled Mandalay Palace grounds and Mandalay Hill awaited us.

Thursday evening we were at the recently opened Jefferson Centre, set up with library, meeting rooms and a large garden for its first official function. An emotional festival director, Jane Heyn, addressed the throng to say that the festival would not in fact be held at the historic Kuthodaw Pagoda as planned. Politics had initially placed it there, and it was politics that had removed it, due to machinations (so we heard) within the Ministry of Culture. After that bombshell, met up with my friend Qaisra Sharaz, whose latest novel, Revolt, is selling like hot cakes. Great dinner with British media stars Martha Cooney, Fergal Keane and Dame Joan Bakewell, then met some of the Burmese women writers taking part in the festival.

A quick ceremony at the Kuthodaw Pagoda and we are swept by bus to the new magically set-up venue at the Mandalay Hills Resort Hotel. Jane and her team have done a magnificent job. My session, a workshop for young Burmese writers, is first off the block, running just 30 minutes behind schedule. Talked about history and the imagination, fielded some great questions and gave probably one of my better readings from Borobudur. Chatted to Thin Thin Aye Htain, one of the many Burmese writers I had the opportunity to meet afterwards and in the coming days. In sympathy with my long gestation with Borobudur (which was many years in the writing), she said, ‘I’ve been thinking about the military intervention for 20 years.’

In the afternoon went to a very moving session with broadcaster and journalist Polly Devlin, and sensitively chaired by poet Joseph Woods, providing some incisive glimpses into the life of her brother-in-law, Seamus Heaney. Not a dry eye in the room, I suspect. Afterwards ran into the beautiful Gassanee Thaisonthi, participating as media. Had a chance to talk to her about her recent amazing trip to Antarctica.

Courtyard dinner with the Emperor gang. Joining us was fellow Melburnian, French studies scholar and director of the Australian Festival of Travel Writing, Jacqueline Dutton. 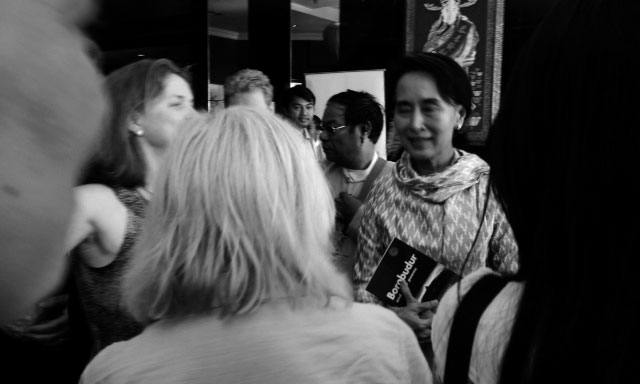 Michael and Kelly have their session cut short as a throng of excited people wait for Daw Aung Sun Suu Kyi. On the way there, our taxi driver asks, ‘Is our leader coming today? I want to see her!’ He pronounced the Constitution, which prevents Suu Kyi from becoming President as being ‘fucked!’ Fundraising stalls are set up near the hotel and I buy a souvenir NLD T-shirt for (AUD) $4.

Throng crushed but never threatening. Security did a great job. For once useful wearing an author lanyard, following the burly guard through the crowd as he shouted, ‘Author, Author!’ A seat next to Qaisra, media helping us with photos. Aung Sun Suu Kyi talks about what literature means to her, how it is poetry she enjoys most these days. I must say, I just catch the words, listening to her perfectly formed sentences. What a pleasure to the ears.

Next up a great session with Canadian poet and novelist, Karen Connelly. She reads from her finely crafted and searing novel set in a Burmese prison, The Lizard Cage, a book that took ten years to write and one I’d definitely recommend.

Lunch with poet Ko Ko Thett in the deserted authors’ lounge while Suu Kyi has her second session, this time with Louis de Bernieres and Jung Chang. Now a resident of Vienna, Thett enjoys a good coffee!

Not long after, Aung Sun Suu Kyi comes in for tea and has a heartfelt meeting with a family friend. Authors line up for an audience. About to present my book I have cold feet, but urged on by two wonderful women who act like a benevolent chorus (‘If you don’t do something it will not happen!’) and put in a request to the bodyguard. Next thing Suu Kyi is in front of me and the book is in her hands. I learn a little about charisma in that moment. In this case, it is about beauty, but essentially the deep beauty in the light of the eye. Heartfelt thanks to Mamie Cheong for the photos of, as she put it, ‘from approach to victory!’ Oh ladies, where have you been all my life?

Last day. Louis de Bernieres talking wonderfully about the rooks in his garden at Norfolk. Brilliant session by Rupert Arrowsmith on poet and critic William Empson’s amazing journey into Buddhist iconography in 1930’s Japan, revealed by Empson’s recently discovered manuscript which was lost for 60 years. Very much looking forward to Arrowsmith ‘s book on this intriguing subject, The Face of the Buddha, coming out this year.

Poetry session at the poolside pagoda. Read with, among others, Ko Ko Thett, Belgian writer Lutgard Lams and Karen Connolly. After that, a quiet coffee, solo, which worries the volunteers, thinking I may be lonely.

Final session with biographer Peter Popper. Straight from a journalism workshop mocking up a section of a local newspaper (Popper is a journalist with The Independent), he has plenty of questions, as Aung Sun Suu Kyi’s biographer, to field.

Back to my solitude. Sitting outside on a breezy boat going down the Irrawaddy to Bagan, home of the pagodas. Down the river, the Conrad fantasy envelops
me. There is time and there is time.

This entry was posted in GUNCOTTON and tagged Jennifer Mackenzie. Bookmark the permalink.
Jennifer Mackenzie is a poet and reviewer, focusing on writing from and about the Asian region. Her follow up to ‘Borobudur and Other Poems’ (Lontar, Jakarta 2012) ‘Navigable Ink’ (Transit Lounge) is forthcoming in 2020.