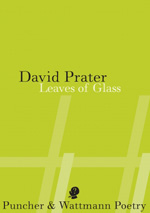 David Prater’s latest collection Leaves of Glass is based on three years’ correspondence in the late nineteenth century between young Australian poet Bernard O’Dowd and the ageing master Walt Whitman. The epistolary material between these two men, a collection of twenty or so letters currently archived at the State Library of Victoria, forms the skeleton for this collection. Prater deftly plays with these two personae, offering a kaleidoscopic vision of their relationship alongside a number of poems that experiment with the ambiguities of written language and the shifting levels of intimacy revealed by the O’Dowd–Whitman letters. Many of the poems will speak most strongly to a reader who is more than passingly familiar with Whitman’s work. It is not a book to be picked up idly, but one that engages with the often-overlooked sympathies between Australian and American poetic traditions, and offers a compelling insight into the lesser-known figure of Bernard O’Dowd. Beyond this, however, Prater’s artisanal use of language and style demonstrates his flexibility and intelligence as a contemporary poet.

Personal correspondence is a tricky source for creative material. Balancing these individuals’ inner thoughts, their intimate writings to another, and publicly available archived material requires careful attention and creativity. The tension between the categories of private, intimate and public leads to spaces and ambiguity: gaps between what is felt and what is expressed, between what is answered and what is ignored, between what can be found, later, in the archives and what has been left out or lost. Personal letters, or what Dierkz terms ‘familiar letters’, which are ‘devoted to the expression of affection and duty among kin, family and friends’, are used to close the distance between individuals, usually on a very intimate level. Prater’s poems create a fictionalised account of these two men’s lives around the details found in their correspondences, often drawing epigraphs from the archival material to contextualise the poems. For example, epigraphs from O’Dowd’s letters head the poems written from O’Dowd’s point of view. These poetic personae, part real and part imagined, are vibrantly formed, with the O’Dowd persona in particular being marked by a clear and distinctive style. This collection is dominated by O’Dowd’s voice – fittingly, perhaps, given the abundance of critical and creative material written on Whitman and the comparative dearth of writing by and on O’Dowd. O’Dowd’s work, as Judith Wright acknowledges, ‘has dated badly’ despite public appreciation for his poetry during his life (quoted in Prater’s book). Prater offers a poignant and troubled vision of the aspiring young poet: a man beset by self-doubt, entering into a correspondence, both epistolary and spiritual, with Whitman the ‘revered Master’.

Leaves of Glass is bookended by poems drawn from the opening and closing lines of O’Dowd’s and Whitman’s letters. O’Dowd, who initiates the correspondence despite fears of seeming a ‘presumptuous intruder’ (Prater), takes pains to address Whitman with the respect and awe that he considers appropriate for a master poet, who remains an affable yet controlled figure throughout. The letters assume the function of ‘a connector between two distant points’1, and, furthermore, represent an ongoing and evolving relationship between individuals whose only contact is through the correspondence; the letters are, in fact, the sole physical expression of the relationship. Whitman, particularly in Leaves of Grass, recognised the power of the written artefact to stand in for the physical presence of its author. In his ‘Whoever You Are Holding Me Now in Hand’, an exemplary poem of this type, Whitman establishes the notion of physical intimacy and concord between a text and its reader, with the book acting as ‘the new husband and … the comrade’ (116) who is kept physically close to the reader’s body, while also questioning, in the poem’s conclusion, the possibility that a reader can ‘grasp’ an author through the texts that they have written. For O’Dowd the communication, in tandem with his reading of Whitman’s works, results in a non-bodily eroticism – Whitman’s texts become husband and comrade, even in the physical absence of Whitman. In response, O’Dowd’s writing enacts a desire, perhaps partly sexual but predominantly intellectual, that is only ever present in mediated, textual form.

It has been argued that ‘Whitman was attracted by forms of eroticism other than those that are expressed in acts between bodies’2, including those displaced physical relations between reader and author that occur through written texts. The letter effectively becomes a fetish object, standing in for the body and self of one’s correspondent. Along with the vigorous, vital, and virile life philosophy that Whitman espouses in his works, this leads to the development of a significant erotic association for O’Dowd. Prater acknowledges the complicated nature of the intimacy between these two men, as well as the tension between public and private writing, in the early poem ‘O’Dowd Seeks Whitman’. Taking its impetus from O’Dowd’s initial introduction of himself to the older poet, this poem is written in the idiom of a twenty-first century personals ad, including the acronyms and abbreviations that dominate both pay-by-the-word classifieds entries and speed-dependent online instant messaging. The personals ad enters into a long tradition of seductive or romantic epistles, with the unique characteristic of being simultaneously public and faux-intimate. Usually written in the second person, there is an ambiguity between the intimate singular and non-specific collective address, which is perhaps intended to make the reader feel as though they are the one and only intended recipient of the contained sentiments. Prater’s ‘O’Dowd Seeks Whitman’ adopts the abbreviations and idiom of newspaper and online personal columns, and positions O’Dowd well and truly as the ‘seeker’, the romantic pursuer whose ideals and desires are met by the figure of Whitman. There is, as in any supplicant’s pursuit of his idol, a certain irony here: the qualities that make Whitman such a desirable figure to correspond with, his genius, generosity, and vitalist life philosophy, also paradoxically serve to make his pursuer, the presumptuous intruder O’Dowd, unfit to correspond with such a Master.

Though an erotic charge arises from this distance, O’Dowd is also troubled by his attempts to reconcile his inner feelings with expressions appropriate to his letters. This is demonstrated by the dramatic tonal shift between the poems addressed as correspondence to Whitman and those exploring O’Dowd’s personal inner thoughts. The public O’Dowd persona, demonstrated by the opening poem, ‘O’Dowd Seeks Whitman’, is seeking ‘fr’ship &/or possible loveship’, keen to enter into a relationship of some kind with a more established poet. The younger poet seems to submit to Whitman’s authority, both as a poet and as the father of a life philosophy founded on variety, vigour, and virility. O’Dowd addresses Whitman as ‘Master’ and tends to copy his elder’s style, mimicking Whitman’s long line length, vocabulary, and cadence as well as echoing his favourite themes. If you compare the poems ‘Sunbathing’ and ‘Cute’, which follow one another in Leaves of Glass but are written by the O’Dowd and Whitman personas, respectively, it is clear that O’Dowd’s emulation of Whitman’s style marks his correspondence: the line lengths, use of couplets, and even the diction of these two works closely match one another, demonstrating how far O’Dowd attempts to shape himself and his writing on Whitman’s model.

Sally Evans is a poet and para-academic based in Melbourne. She holds a doctorate from the University of Wollongong and is currently the Reviews Editor for RABBIT: a journal for non-fiction poetry. Her work has been published in Cordite and Southerly, and she blogs when she feels so inclined.

View all posts by Sally Evans on Cordite →