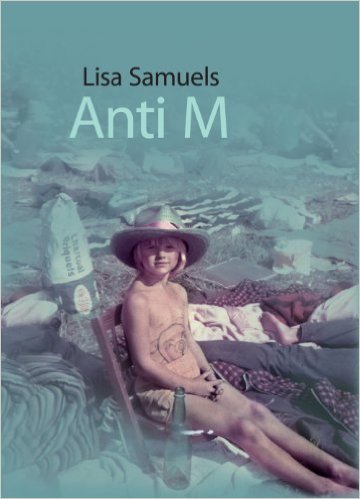 Water, Lisa Samuels asserts in her 2010 manifesto for ‘archipelago poetics’, is ‘the unsettling undefined’: the tactile yet formless flow that both separates and joins groups of islands just as language separates and joins groups of selves.1 With her finely honed, comprehensive poetic and critical capacities, Samuels is a transcultural LangPo marvel – hiding in plain sight here in the wide wetness of the Pacific Ocean since relocating from the US to New Zealand in 2006. Her work is a membranous extension of some of the principles of Anglo-American conceptual poetry into the vastly different psychogeography of Aotearoa. Samuels reconceptualises literary communication as a function of membranism, of wet contact rather than the dry separation between ‘representing figure and represented matter’, between word and thing. Poetry, then, becomes a space to blend the two poles of Western philosophy; where ‘dry thinking’ and ‘wet being’ can come into contact.

In Wild Dialectics and Anti M, we encounter works that are both formally and conceptually archipelagic, formed from fluid spaces and eroding islands that are always in flux. Although the collections operate via different compositional principles – Wild Dialectics is a work of accumulation, Anti M one of omission – they demonstrate the same tension between surface and depth, the written and the unwritten. Put more simply, this is a poetics of gaps: those that exist physically between the marks on the page, as well as the conceptual gaps between the words and what we understand by them.

Samuels does not consider these gaps to be divisive or insurmountable. Rather, she aims to provoke a different form of contact: one that may swell and distort but can nevertheless be crossed and recrossed, that is simultaneously permeable and tangible. Samuels writes of ‘pulling metaphors back toward the bodies of the enacting and activating participant-creators (readers/writers/viewers).’2 However, there is a noticeable impenetrability to these poems, which can work against the intended sense of contact even while it allows for such contact to occur. For me, the language of these works is tactile, but it disallows any sense of communication between the reader and any other human subject, whether real or imagined, and, as a result, the poetry feels inorganic, impersonal and sterile. Anti M is a more compelling collection than Wild Dialectics at least in part because of the intimacy it allows between myself as reader and the book’s protagonist Daisy.

Wild Dialectics, as the title might suggest, is the more unsettling and unsettled of these two collections. A wild dialectic is, perhaps, one that never achieves a synthesis, borne of two opposing positions that are moving too unpredictably or evolving too quickly to sit comfortably together. Throughout her writing, Samuels sets up a dialectical relation between ordered conventional meaning and disjunctive chaos, without any appreciable authorial guidance allowing the tensions between these two positions to be resolved.

Of course, resolution in this sense need not be the goal. This poetry is purposefully anti-expressionistic, and the language is designed to provoke an experience rather than communicate a message (which contributes to the sense that, as a reader, I am not in fact in contact with anyone apart from myself). The first epigraph to Wild Dialectics, from Édouard Glissant, challenges this reliance on expression: ‘piling-up is the most suitable technique for exposing a reality that is itself being scattered’. This technique of ‘piling-up’ runs counter to creativity in the commonly accepted sense, suggesting instead an organic or untended accumulation of otherwise unrelated materials. Samuels’ style of accumulation is not entirely uncrafted: there are still fragments of grammar and syntax at the heart of what Michael Peverett has called ‘Lisa English’ or ‘LE’, which, unlike Standard English, operates through ‘the consistent adoption of words that strike us as approximate, hazy, blurred’.3 The approximate nature of Samuels’ writing reminds us that distance and proximity can both cause distortions, and that the majority of the labour of coming in contact with things (objects, ideas, other people) is the challenge of bringing them into focus.

In Wild Dialectics, the signal-to-noise ratio hovers just beyond comfort: nothing occurs in the experience to confirm or deny our interpretations, and flicking between channels of static does little beyond reminding us that language is, ultimately, a fallible communication medium. In my reading, the most obvious noise comes from the lack of fixed pronouns and subject positions: poetic subject and object shift from line to line and, as a result, any incipient sense of empathy or characterisation is delayed and distorted. A poem may begin in a seemingly bucolic, descriptive vein, as in the evocation of ‘(b)rilliant country, butte of the children’ in the opening line of ‘Thirstory’, before shifting to more complex psychological topographies. The pronouns shift from the alcoholic ‘he’ and a barely-mentioned ‘her’, through the first and second persons, and back to the third, and the syntax and fragmentation leave me uncertain whether the ‘you’ is addressed from the speaker to the man, or from he to someone else. There are suggestions that the speaker is describing her father: there is a birth and a naming, though the grammar does not allow me the luxury of knowing who was born and named, and the hint of ‘a hair of gold’ such as might crown a newborn’s head says as much about my own creativity as the poet’s. Samuels switches the expected order of words and syllables, forcing me to focus rather than simply seeing what I expect to be there:

I might misread parts of these lines as ‘he summoned’, ‘to drink to this’, ‘to spill drink on his clothes’, and through my misreadings develop a particular sense of the poem that would be uniquely my own. This isn’t an interpretation, per se, so much as a feeling or an impression. Indeed, the appropriate critical response to this accumulation of language might well be a simple accumulation of affects. This challenges the depth/surface binary and asserts the value of the surface as the membrane of contact between entities.

In this poem, as in many others in Wild Dialectics, I seek out any anchor for my interpretive drive, unwilling or unable to feel the language without trying to find a meaning. The contact that I seek is not with language, but through language to another person: an author, a character, a speaker. Poetry’s power comes from its capacity to make the reader cognizant of the flexibility and manipulation of language, but I value this more as a tool for unsettling relationships between language users than as artifice for its own sake. Being reminded that language is a tool, subject to use and misuse, modification and breakdown, is a valuable experience; committing energy to texts that feel unresponsive to one’s best interpretive efforts is, perhaps, not. As a result, the strongest of Samuels’s works are those with a little more chiaroscuro, more texture and contrast: like a Magic Eye picture or a television set, we need the occasional moment of clarity, if only as a reassurance that our receiving apparatus is functioning correctly.

Where Wild Dialectics too often misses this mark, Anti M allows familiarity to bob to the surface and provide fleeting yet reassuring moments of anchorage. As noted in the blurb by Lyn Hejinian, Anti M is poetry created as a function of ‘omitted prose’, an ‘anti-memoir’ without the typical coherence of what we might think of as a self. As well as anti-memoir, Anti M is also the return of Dorothy to Kansas, waking from dream to a home that is both familiar and bewildering (‘And you were there! But you couldn’t have been, could you?’). The fleetingly present protagonist of Anti M, a girl named Daisy, gives me both familiar and unfamiliar glimpses of girlhood, but the tiny hints of an other with whom I might come into contact make this collection a more pleasurable, less abstract, experience than the earlier one.

The book shifts tantalisingly through and around genre and categorisation, as critics such as Murray Edmond have acknowledged (and not without candour):

Just when you thought you would get a Samuels book that you could “get your hands on”, she has whipped through it and taken out all the bits you needed! I would suggest that what we have, instead of a work of putative truthfulness, is a work of psychic nudity.4

Although I do not consider the omitted prose form to be the ideal support for such a revelation of the self, I can see the significance of Samuels’s careful stripping back of both language and her own supposed identity. Crucially, this unveiling functions beyond psychic nudity: it directly evokes the archaeological processes by which we uncover our own life’s artefacts and try to recreate some hypothetical order amongst them; and it also demonstrates the functioning of language itself, which obscures even as it reveals. In being anti-memoir – memoir degree zero – Samuels’s book draws into sharp relief the contingent nature of memory, recollection and retelling.

Pages: 1 2
This entry was posted in BOOK REVIEWS and tagged Lisa Samuels, Sally Evans. Bookmark the permalink.
Sally Evans is a poet and para-academic based in Melbourne. She holds a doctorate from the University of Wollongong and is currently the Reviews Editor for RABBIT: a journal for non-fiction poetry. Her work has been published in Cordite and Southerly, and she blogs when she feels so inclined.