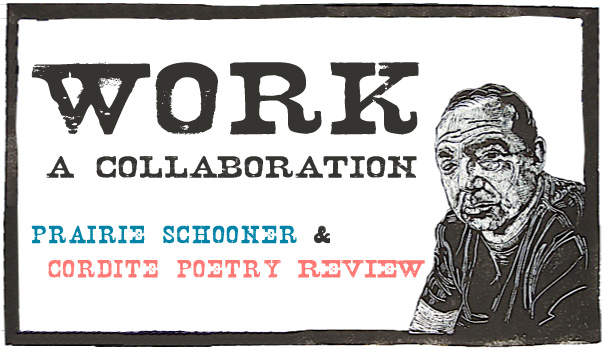 Cordite is excited to announce a special collaboration with Nebraska-based literary journal, Prairie Schooner. The collaboration, entitled ‘Work’, is the first in what promises to be an exciting ‘Fusion’ series, wherein Prairie Schooner teams up with innovative journals from around the world. ‘Work’ consists of fifteen poems from each journal’s archives, as well as artworks, audio poems and interviews.

Fusion is an opportunity to create dialog across geographical spaces and cultures through the sharing of art and writing. It represents an effort to create bridges between the many silos that separate us, and to do so by asking writers to think about the very things that connect us and distinguish us in different parts of the world.

Cordite editor David Prater reflects upon work in his editorial:

“I got my first paid job while I was still at school, working as a milk delivery boy in the suburb of Wollongong, an industrial city in Australia where I lived with my family in the 1980s …”

Over the coming week we’ll also be featuring eight more interviews here on the Cordite site. Then, to round out the collaboration, and in honour of Prairie Schooner‘s prairie roots, we’ll be presenting a special Nebraska tribute, curated by Liner Notes star Sean M. Whelan. More on that soon.

For now, head on over to the Prairie Schooner site to check out the goods, or else do so indirectly by visiting the Cordite mirror page.