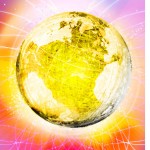 Frank Moorhouse's article in The Sunday Age (full text here) discusses the ongoing Meanjin 'controversy' in a much-needed context: that of the troubles currently facing print magazines, as well as some of the problems facing online magazines in Australia.

Moorhouse estimates the combined readership of Australian literary magazines at about 100,000 readers per year – a figure that's pretty woolly if you ask us:

Literary magazines then would have a combined, single-issue distribution of about 32,000, which would predictably generate a readership of about 100,000, taking into account library subscriptions and readership by more than one person within a household and among friends.

The key words here, of course, are 'would' and 'predictably', for in the absence of any figures or statistical references from which to 'generate' a nice, well-rounded figure such as 100,000, we're just going to have to take Moorhouse's word for it.

These kinds of figures may well be meaningless for the average reader or Australian citizen (whose taxes fund both the production of print magazines and the maintenance of online magazines such as Cordite) however they become more relevant for us when Moorhouse goes on to discuss the problem of readership for online magazines:

The online magazines Cordite (poetry, two issues a year) and Voiceworks (a magazine for under 25s, four issues a year) are funded. Online estimates are difficult to measure – “hits” are an unreliable indicator of readership. The most successful online magazine is Jacket (primarily poetry and unfunded by choice), established in 1997 and edited by John Tranter. He says he has between 8000 to 15,000 hits on content pages of each issue.

This paragraph raises more questions than it answers, unfortunately.

To begin with, I'm sure the Voiceworks crew would be disappointed to learn that they're an online magazine (in fact, Voiceworks is a print magazine, with a slowly-evolving online arm).

Secondly, it's a little ironic to state that online readership is 'difficult to measure' when you've just pulled a figure of 100,000 out of the air for readership of print magazines, including such quantifiable measures as, ahem, “readership by more than one person within a household and among friends.”

Thirdly, while we wouldn't disagree that Jacket is a fine magazine, we're just unsure as to how 'successful' is here defined.

There's no argument that online readership is a difficult cohort to quantify. It's true that 'hits' alone are no real indication of readership, whether of print magazines with websites or exclusively online magazines. The statistics quoted above in the context of Jacket's hits are truly and completely meaningless.

The same could be said for Cordite's statistics, which we are obliged to report to the Australia Council for the Arts each year. Here's a reproduction of the last six months' site statistics for the cordite.org.au domain, as generated by Webalizer: 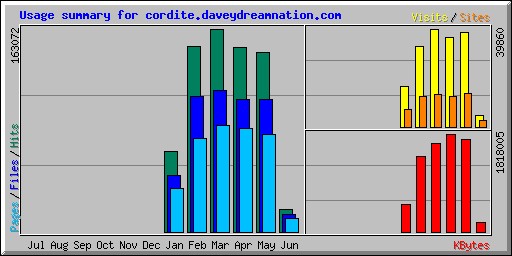 Our apologies for the quality of this image, however you should be able to observe that in March 2007, for example, there were 163,072 hits on the Cordite site (an average of 5260 hits per day), and a total of 39,860 visits (an average of 1285 visitors per day). Sounds pretty impressive doesn't it?

That is, until one 'drills down' into the statistics for the whole site. Almost 10% of the hits for the month of March 2007 were on the Ashes blog index page (which has lain dormant since February of this year, and another 15% were on the main page. This would seem to make sense, as these are the two main entry points on the site.

However these two numbers (25% of all hits for the month) are hugely unreliable. The problem is that Cordite is published using a content management system which enables comments on posts; this in turn leads to a large number of hits from spambots searching for open comment threads.

In order to make more meaningful sense of the statistics, we need to drill down even further. Just over 3% of hits were 'trackbacks' from the Cordite site to (we presume) users who have set up RSS feeds alerting them whenever a new post is published on the site.

6746 hits or 4.14% of the hits on the site were requests for the Cordite masthead image (that is, the street sign you can see at the top of this page). Now we're getting somewhere – this is at least a measure of the number of times a page was loaded that featured the image and is therefore a fairly accurate measure of hits on actual content pages. This figure is confirmed by the number of times the style sheet was accessed – 6064 hits, or 3.72% of all hits on the site for the month.

Therefore, in the month of March 2007, the Cordite site received approximately 6,000 -7,000 quantifiable hits on pages with content (whether they be poems, features, reviews or other content pages). During that same time, there were 1357 hits on the index page for the current issue. This figure accounted for less than 1% of hits on the site.

Were we to use that as our sole measure of readership, we would be forced to acknowledge that ours is roughly the same as that claimed for Meanjin by Moorhouse.

We could go on. However, suffice it to say that while Moorhouse has a point about the unreliability of 'hits' as a measure of readership, it's certainly not impossible to come up with a figure using available statistics. And that figure, in the case of Cordite, directly contradicts his later assertion that:

Online magazines still have to find a readership, usually through mentions in the mainstream media.

While of course we're excited every time we're 'mentioned' in the mainstream media (an event that occurs approximately once every two years), we'll satisfy ourselves at this stage with continuing to respond instead to our growing base of subscribers, contributors and 'viewers' – all of whom are members of an at least quantifiable and real group.

It's called a readership, and they've already found us.