Review Short: Yan Jun’s You Jump to Another Dream 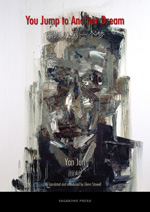 This era’s most magnificent exhaustion

You Jump to Another Dream by Yan Jun
Vagabond, 2013

Yan Jun’s poetry works through his experience of contemporary China by employing an aesthetic that is traditionally grounded in observation of the momentarily significant. He is captivated by the dazzle of a new consumerist culture only when that dazzle is spectral and fleeting. In an interview with Cristen Cornell (‘Lost in the Supermarket with Yan Jun’, Artspace China blog, University of Sydney) he decries the consumption culture’s take on art as a ‘production process’ which removes ’the possibility for uncertainty’ and what is ‘unknowable in individuals’. He comments on the inextricable logic of cultural monuments such as the Forbidden Palace being preserved while the traditional living areas, the Beijing hutongs, are pulled down, symptomatic of a daily life becoming ‘more and more deprived’.

This experimental sound artist and poet, who has performed in Beijing clubs for many years, is a master of juxtaposition of image, using his vision of the contemporary, of nature and of mood, in an exciting new way:

Jan Yun prises apart contemporary modes of connection to bring nature in, as in ‘Material Life’:

In ‘We’, spatial transpositioning overwrites what is seen as ‘fantasies of prosperity’ where ‘The whole world is shivering’, with a kind of Imagist trace hanging over, re-creating the world:

The poet does some exciting work with flight and air, demonstrating his interest in, and mastery of form, whether it is in response to the contemporary in the same poem:

or as a variation on Buddhist imagery in ‘October 9th’:

or as depiction of the purely formal in ‘September 12th’:

Yan Jun also creates a sense of continental space on a large canvass in ‘August 10th’,

but also draws us into an apprehension of the mood of landscape in ‘November 20th, Watching the Rain in Taipei.’

On occasion, in pieces designed for performance, the poet moves away to declarative but finely wrought poems reminiscent of Ginsberg as in ‘Against All Organised Deception’. The contemporary world and what Yan Jun refers to as ‘the supermarket of language’ resounds in You Jump to Another Dream as fleeting phenomena. I’ll conclude this brief survey of this volume, brought out in translation by Vagabond Press, with the poet’s preferred mode, as seen in the classical detachment and swift movement of ‘July 7th’:

This entry was posted in BOOK REVIEWS and tagged Jennifer Mackenzie, Yan Jun. Bookmark the permalink.
Jennifer Mackenzie is a poet and reviewer, focusing on writing from and about the Asian region. Her follow up to ‘Borobudur and Other Poems’ (Lontar, Jakarta 2012) ‘Navigable Ink’ (Transit Lounge) is forthcoming in 2020.