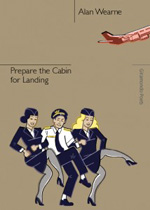 Prepare the Cabin for Landing by Alan Wearne
Giramondo Publishing, 2012

Prepare the Cabin for Landing, as with much of Alan Wearne’s poetry, draws on popular culture, social observations and the Australian vernacular. I recall reading a review of an earlier Wearne collection which warned the reader that they would require a Wearne dictionary in order to understand the cultural references being made. Of course, no such dictionary exists, and as Adam Ford has argued previously in Cordite Poetry Review, Wearne’s poems can be difficult unless you are ‘either amazingly well-read or precisely of Alan Wearne’s generation (and interested in the same things as him) to have the right combination of knowledge, memory and experiences to understand or empathise with every poem in this book.’

Wearne (b. 1948) is a babyboomer – and I admit that as a member of Generation Y, there were numerous cultural references that passed me by, or were difficult to understand. For example, I know I don’t have sufficient Wearne cultural collateral to fully understand the poem ‘Dysfunction, North Carlton Style or The Widow of Noosa.’ The poem uses rhetorical devices such as synecdoche and metonymy, where the part stands in for the whole. Phrases allude to stereotypes, ‘She lectured in Ethics, out at La Trobe,’ the full weight of which is lost on this non-Melbournian. There are connotations here that I am just not privy to and they are repeated throughout the book, as is the often outmoded language. The last stanza includes the words ‘rooted’ and ‘grouse,’ which sound archaic and unsettle the contemporality of the poem as you try to remember which decade those words were in common currency, or question whether a ‘cutesy barista’ at Noosa in any decade would have ever blurted out ‘You’re what side of sixty? Geez y’look grouse.’

The rhyme scheme in ‘Dysfunction, North Carlton Style or The Widow of Noosa’ adds to the satirical nature of the poem, what Martin Duwell has referred to as Wearne’s ‘comic/crude mode,’ as he holds up a middle class North Carlton couple for ridicule. However, there is an ugliness in the use of stereotypes and the mockery, even without a Wearne dictionary, which reoccurs throughout the collection and feels born from an adolescent bitterness and cynicism. The back cover blurb lauds Wearne as ‘Australia’s poet-moralist, a master of its idioms, the recorder of its pretensions, and the scourge of its big-noters, con-artists and crooks.’ The quote makes a virtue of this approach, as if Wearne is providing us with some kind of service. But there is a crass lewdness that runs through this collection, an unsettling smuttiness and smugness which reminds me of jokes told by dirty old men: the politically incorrect type that you’d imagine you might still hear being told in pubs, at pistol ranges and around camp fires.

I think Wearne intends these poems to be satirical rather than crass. However, ‘Howzat,’ a poem footnoted as being about Shane Warne, holds Warne up for ridicule and the language choices objectify women.

The poem is clever. Wearne is using humour. His choice in language seems impelled as much by the strictures of the end rhyme as his desire to use Australian slang – grouse unfortunately rhymes with spouse – but his references to floosies, queers, Greer and even the faithful spouse seem targeted and ugly.

If we reconsider Adam Ford’s observation mentioned above, then I can agree that Wearne’s poems can be difficult if you aren’t of his specific generation, but it is the sanctimonious nature, the abrasiveness of the writing which I cannot reconcile. The poems in Prepare the Cabin for Landing which forgo this moral superiority and lewdness are wonderful. Such as ‘The Vanity of Australian Wishes’, which begins,

Wearne has a rare talent for social observation, commentary and wit, but these poems and moments in the collection are overshadowed by bawdiness and bitterness.

This entry was posted in BOOK REVIEWS and tagged Alan Wearne, Fiona Scotney. Bookmark the permalink.
Fiona Scotney completed a PhD at the University of Queensland in 2014 on the 'Generation of 68' poets. She currently resides in Canberra and is working on her first book on Australian poetry history. She has previously been published in Cordite, The Australian Poetry Journal and Southerly.