Since it began 23 years ago, the Internacional de Poesía de Medellín has grown to become a major poetry festival in the world, in a country riven by 50 years of civil war. This year’s Festival (6-13 July) coincided with a new round of peace talks in Havana between the Colombian Government and FARC, and FARC rebels reportedly fighting security forces in the mountains. The Festival featured Australian poet Les Wicks, who reports on his experience below. The Festival has also ‘grown’ up alongside seismic changes for the city of Medellín, Colombian’s second-largest and once described as the ‘most violent city in the world’ (Time, 1988), due to its brutal cocaine drug-cartel culture. This year, in February, it was nominated instead as the ‘World Capital’ of innovation, by the Wall Street Journal and the Urban Life Institute, following civic projects aimed at radically improving life and security for its citizens – and its reputation.

At the same time, a UN report condemned the city for being among the most unequal in the world, due to ongoing murders, ‘disappearances’, unemployment and criminal gang warfare. The Festival was started two years before the killing of drug-cartel kingpin Pablo Escobar in 1993 by Colombian National Police, and three years before the publication of Colombian-born author and film-maker Fernando Vallejo’s well-known novel, La virgen de los sicarios (Our Lady of the Assassins) – which spawned a new genre of novel known as narcorrealismo, narcotrendismo or la novella sicaresca, fiction drawing on the violent themes of the drug trade. Vallejo was born in Medellín but has lived in Mexico since 1971, and renounced his Colombian nationality in 2007 (becoming Mexican), citing his political dissent in a public letter. The Festival, which this year expressly endorsed support for the current Havana talks, was conceived by its founders to be an initiative of peace, a form of cultural resistance, and in 2006 was awarded the prestigious ‘Right Livelihood Award’, a prelude and alternative to the Nobel Peace Prize. (JLP) 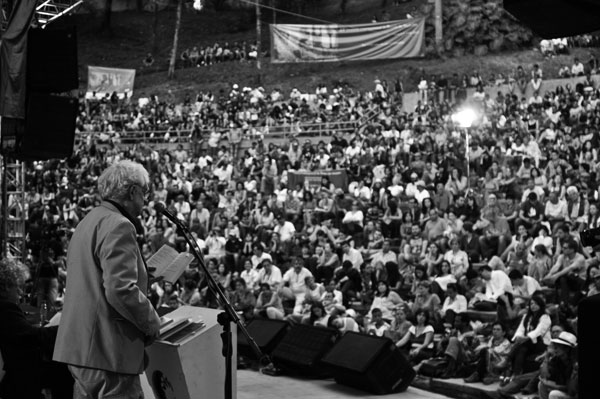 Okay. Around 5000 people were gathered in the generous heat of this amphitheatre, holding events from the 23rd Festival Internacional de Poesía de Medellín. A diverse crowd from children to seniors chattered animatedly amongst themselves as vendors moved along the rows selling popcorn and Coca-Cola. Television cameras fidgeted at the hem of the stage, broadcast lighting came on as sound techs stroked their dials. For an Australian poet, the crowd and attention seemed inexplicable – this was a poetry reading.

Colombia has been a nation at war with itself for 50 years. The toll of death and displacement is staggering. There are currently talks ‘underway’, there always seems to be talks underway. Twenty-three years ago some poets got the idea of responding to a culture of violence with poetry. The Festival was born. For an Australian – with our marginalised poetics – this notion might seem something like fighting fire with feathers. But in Latin America, as has been the case with other territories with long histories of war and civil dissent, political foment has often seen poetry and poets championed – and read – by the masses. Poetry considered relevant, and powerful, as a tool of revolution.

Early on, expecting perhaps only hundreds to attend, the organisers found public interest overwhelming and the nine-day event has grown to become a major fixture in the city’s calendar and the largest poetry festival in the world. It is attended by fervent audiences, and has inspired and supported a number of other new poetry festivals around the world. This year there were to be a total of 220 readings involving 66 poets from 41 countries. Venues are mostly in Medellín but there was a solid program of forays into other centres. I am this year’s Australian guest. It’s fundamentally important that we have a presence at gatherings like these. The Australia Council Literature Board covered the airfare while Macquarie University organised my Spanish translation with Judith Mendoza–White. Vastly appreciated further translation came from Raphael Patiño Góez and George Leogena. I have always argued that for our poetry in Australia to ‘work’, we need commitment, clear planning and sustained effort/support over time. This Colombian festival took off from its first year. Does this mean we have to change, back home, a people?

That amphitheatre – Teatro Al Aire Libre Carlos Vieco – was the site of the opening reading. The range of voices reading from the stage were astonishing; Lorna Shaughnessy (Northern Ireland) quietly shared the pain of internal conflict with Vietnamese-born Nguyen Phan Que Mai. Sainkho Namtchylak (Tuva) performed her famous throat-based work. Thiago de Mello, a grandfather of Colombian poetry, had the crowd screaming for more. It amiably forgave my woeful Spanish, seemed to enjoy the English versions of my poems, and loved the Spanish ones read by theatre director Wilson Zapata, who was to be my reader throughout the Festival. Later, as I was exiting the toilets, I was bailed up by an eager Colombian who wanted to show off his skills on the didgeridoo he had purchased in Ecuador. The tunnels under the stage became tunnels within my head as fellow urinators quietly smiled.

The days that followed were a crazy blend of intense multicultural dialogue, hugs and photos. Around 100 people came to the reading the next day in the working-class suburb of Carrera. That was the hall’s capacity. People were turned away. The workshop group hosting this event was celebrating its 20th year, and we all know how hard it is to sustain voluntary organisations over time.

Monday, a group of us flew to Apartado, a smaller city of around 180,000, for another capacity audience of 200 with my translations read by Mark Vender, an Australian living there, who is the convener of the city’s writers’ group. Tuesday saw a ‘disappointment’ with our first non-full house, a mere 65 people. Wednesday saw a mildly hair-raising 3 ½-hour trip across the mountains to Ciudad Bolivar. Thursday, Friday, reading, reading – the level of engagement with art across society in Colombia is simply remarkable. Vender told me he’d travelled the world and everywhere else seems to be sinking into a sediment of monocultural, consumerist tepidity. To him, only the people of Colombia (and maybe Brazil) appear content to be going their own way. That way is a long stretch short of perfect – there were gunshots last night outside the hotel. Colombia has critical problems. But it is definitely special.

It was also deeply energising to immerse myself further in the poetics of South and Latin America, which were obviously numerically dominant in the line-up. With the expected influence of Pablo Neruda and Octavio Paz, the New Baroque still exploring new territories – here was a body of work that was mostly vigorous, linguistically and emotionally robust, whilst profoundly engaging with their readers.

An Australian is invited most years to this festival. It is a pinnacle of a poetic life, professionally demanding and wholly satisfying. Today, as I write, is the closing ceremony (4pm-midnight) where all poetry guests will read one piece. The usual attendance for this final day is around 15,000. Breakfast was laconic – a lack of sleep and a regime of daily appearances has left us wrecked’n’ready. So … (LW)

This entry was posted in ESSAYS and tagged Jacinta Le Plastrier, Les Wicks. Bookmark the permalink.
Les Wicks has toured widely and seen publication in over 350 different magazines, anthologies and newspapers across 28 countries in 13 languages. His 13th book of poetry is Getting By, Not Fitting In (Island, 2016).