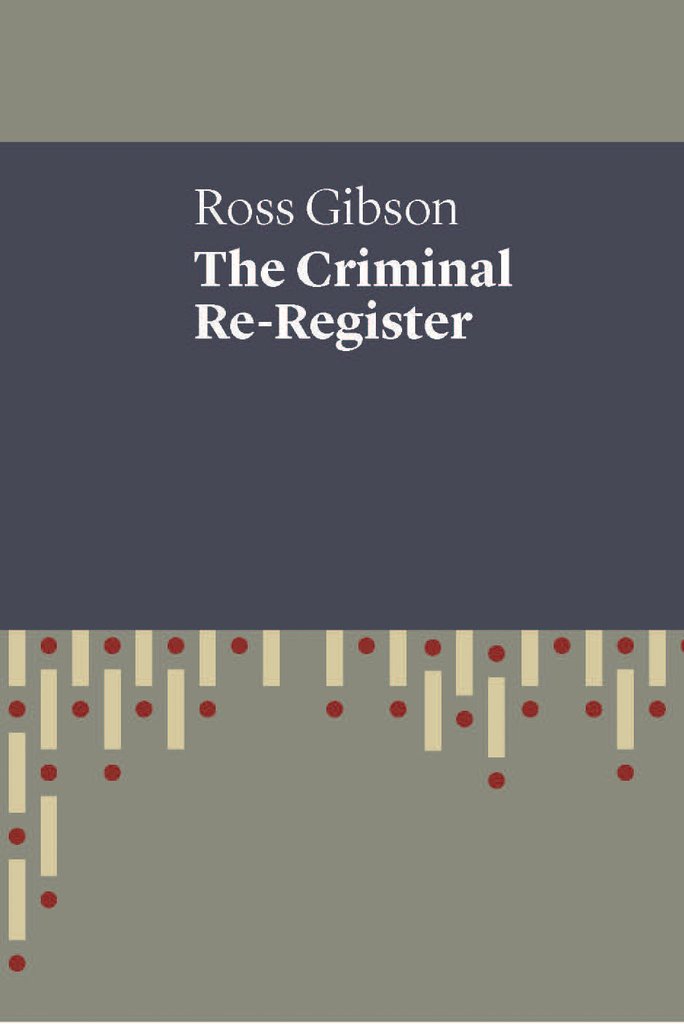 Ladies and gentlemen, the story you are about to see is true.
The names have been changed to protect the innocent. – Dragnet

This is a volume of (mainly) prose poems, derived by its compiler/adaptor/author Ross Gibson, from a large dossier of New South Wales Police records. If these can be described as ‘found’ poems (even if they have been edited) it would be as likely to refer to them as ‘accidental’. Certainly, these portraits and narratives may be challenging and at times infuriating, but when fully firing they are art, very entertaining and most instructive. Centred on criminals and missing persons, the cache Gibson has discovered seems to have been made for poets to find, they being much too important for writers of contemporary Australian prose fiction. One could of course imagine plenty of such material appearing in an historical Selected Documents anthology, in particular the prologue section ‘Notes for Detectives and Men in Plain Clothes.’

Why, though, poetry as the destination? Because so much of The Criminal Re-Register is propelled by language, a strange police dossier lingo from Sydney in 1957. Did the police involved realise they were concocting something fairly akin to poetry? I doubt it. Rather, it’s as if they had been instructed: ‘Whatever you do don’t write poetry …’ and little realising, they did it. Poetry for them may have had been connected with big rhetorical sweeps, and these were the domain of barristers, weren’t they?

Allied to the fodder for imagination, certain authors and their traditions came to mind reading the book: Edgar Lee Masters’s Spoon River Anthology of 1915, that wonderful sequence of brief monologues and a verse novel ahead of its time; the biographical portraits and the ‘Newsreel’ and ‘Camera Eye’ sections of John Dos Passos’s USA trilogy; and Pi O’s epics, 24 Hours and Fitzroy the Biography, wherein he forges an incomparable bond between the documentary and the demotic. Though 1957 was too early to see much connection with television cop drama (that medium only arrived in late 1956), the stark style of the reports adapted by Gibson brings to mind the Los Angeles-based series, Dragnet. Quite often the folk Gibson portrays read like they are in some twenty-five minute Sydney-based episode in miniature.

Are these found / accidental / documentary poems to be judged by the rules of more conventional verse? When required, maybe; though for The Criminal Re-Register I’ll give an example as to where I stand vis-à-vis found poetry, giving my benchmark for such a genre. In the late 1970s I possessed a newspaper advertisement promoting an exclusive housing development out of Brisbane. This took the form of a letter from a very excited young property developer to his mate in wintry old Melbourne extolling Karana Downs, its country club and golf course. Far smoother than mere ocker it was more ‘young man in the know’ to fellow ‘young man in the know’, saying so much about those times, probably without being aware of it. I loved this piece of Australiana so much that I had to spread the word and would be found reading ‘Karana Downs’ aloud at dinners and parties. Soon folk were clamouring for it, near chanting for a recitation. That most were quite stoned doubtless added to the clamour. Was this ad a ‘found’ poem, was it indeed poetry? Well, it was a damn sight more performable than plenty of performance poetry I’d heard, and much more poetry than plenty of contemporary Australian verse I’d read. It had wit, it had vigour, it used the language imaginatively and it was a hit. Who cared about the ‘White Shoe’ values it expressed when the product and its promoter sounded great? Indeed, one wonders if its hyperbole was concocted by the agency to have some kind of laugh at the client’s expense … surely not!

Given the choice between a dull poem and a lively less-than-poem it’s obvious where I’m heading with The Criminal Re-Register. For one of the book’s delights, its major fuel, is that very formal, official cop-speak used in the reports, which hardly goes with the Police Force’s walloper reputation. Thus (and notice the amount of sheer observation and speculation):

Last seen at Central Railway Station carrying a green canvas sack cinched with red twine. Maybe at large in Bathurst or parts further west, or may have suffered a misadventure instigated by any one of the myriad reprobates he has antagonised in recent years.

Offender is of quiet disposition, sober habits, a dapper dresser and keeps no known criminal associates. A neophyte thief, perhaps in thrall to a newly risen mania that cannot be tempered by his will.

And once you are accustomed to such straight-faced seriousness, try imagining:

Admit it, sonny, you’re nothing but a neophyte thief […] now tell us of your newly risen mania, we’ll understand.

And then there are those beautiful sentences telling enough with just so much being hinted at: ‘Ten minutes alone in a dim cell primes him ready to talk’; and ‘May have jumped a rattler to Casino’; and ‘Suffers from lumbago and irritable spirits.’ Or look at these from ‘Assorted Malefactor Quirks’ for which police should be on the lookout:

Skiting of unusual prowess: E.G. as a crooner, a songwriter, a fondler and copulatory, a horse or dog trainer, a floral arranger, a dancer, a bushman, a comforter of the sick, a hospital troubadour, a guardian angel to children.

Pages: 1 2 3
This entry was posted in BOOK REVIEWS and tagged Alan Wearne, Ross Gibson. Bookmark the permalink.
Alan Wearne's most recent books of poetry are all from Giramondo: The Australian Popular Songbook (2008), Prepare the Cabin for Landing (2012) and These Things Are Real (2017). As well he is the publisher of Grand Parade Poets, which has produced 12 books of Australian poetry since 2011.