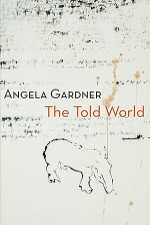 Angela Gardner’s The Told World is a collection that made me feel homesick for Brisbane. Gardner is a Brisbane poet, and while some of the lines in this book specifically reference the city, it is not actually a Brisbane book of poetry. Many of the poems are pastoral, but not grounded in a specific landscape, generally the ‘here’ could be anywhere. And yet, they provide a landscape of familiarity, a space for noticing and reflection, and sometimes, a longing for where you are from. Like in the collection’s second poem, ‘Metamorphoses.’

This poem traverses the general to the specific, from ‘white bread’ suburbia to ‘Mount Coot-tha staked with television masts’, an iconic Brisbane landmark and a sight familiar to me from living in western and southern Brisbane suburbs. The poem has an observational quality, ‘The morning air held, like breath, expectant / not even a distant lawnmower’ and there is an interchange in the narrative mode between first and second-person, shifting our perspective from the ‘I’ ‘On the driveway of my own house / looking forward rather than back’ to the ‘you’ who will ‘come to cliffs / with equipment laid out: ropes, harness, / other tackle and instruction / shouted from the rim.’ Gardner’s metaphorical language provides pleasurable little shocks: ‘radiant with risk’, ‘luminous glances’ and ‘cognate cloudburst’.

These qualities of observation – movement between the specific and the general – are surprise language choices made throughout the collection. In ‘Milkywhite’ the language is jarring,

The lines are beautiful and almost anodyne, until that unexpected adjective in the middle of the stanza, ‘full cunted open’. Cunted is recorded in slang dictionaries as being used to describe a state of inebriation induced by alcohol and/or drugs, but can also be used to mean being broken or defeated by the same hands. Gardner’s use of the word alludes to the ‘flowers on / their weedy stalks’ being not only broken open, but fully spent. ‘Cunted’ brings a violence to the action of opening, or at least a harshness to the state of the flower as completely open. The word acts as a thorn in the poem, a wounding that makes the ‘river’s sleeptalk’ and the ‘wooded hills’ much more uncanny.

Often, there is something a little sinister or unsettling created by Gardner’s expert mix of observation and extraneous conclusions, like in her untitled poem,

The cohesion of the lawn, the green flower and the monochrome grass is broken by the ‘ruin of the sky’ and the uncomforting stars. Flowers feature frequently in these poems, as do birds. In her hands nature functions as a thing of beauty as well as a vehicle for more Gardner-esque jarring. As in ‘Another Fall from Grace’, where Gardner writes ‘these flowers look like dog penises / their lipstick jack-in-the-pulpit Open mouth gaping’. Gardner’s poetry is made of touch and looking, of observation, quiet stillness, enjambed language and little shocks.

My homesickness attaches to landscapes I read as Brisbane’s, and to the melancholy in these poems. The bitter-sweetness directed to the haunting other, the ‘you’ beneath the surface. That ‘you’ who is acknowledged in ‘Milkywhite’ in the line ‘yes you woke me’, and in the intimacy of waking together after rain in the beginning of the poem ‘Between.’ This ‘you’ often appears metonymically, through the reference of a hand, an arm, a pulse, or a breath. Details are divorced from context; Gardner’s poems, while at times very specific, are laced with ambiguity. For example, in ‘Pollen’ we see the ‘you’ presented through a reference to skin, and an indistinctness of forms, as flowers and pollen conflate with stars and meteors.

Bones, skin, flesh, bodies and body parts appear and reappear in these poems, sometimes ‘bones melt’, ‘tongues fail or fade’ and ‘erect nipples / are birds’, but always Gardner uses the human body as part of the landscapes she creates. This collection provides moments and close-ups, cataloguing the features that surround us; air, rain and water, hills, rivers, mountains and coastlines. A whole taxonomy of natural elements are to be read against the more intimate bones, tongues and nipples that animate these poems. Some lines seem fractured, ‘eyes adjust. in the intimacy / of mirrors – tippets’, or non sequiturs, but I find that Gardner’s ambiguity leaves room for interpretation, these lacunas offer a place for nostalgia, longing and for me a space to reflect on my own homesickness for Brisbane.

This entry was posted in BOOK REVIEWS and tagged Angela Gardner, Fiona Scotney. Bookmark the permalink.
Fiona Scotney completed a PhD at the University of Queensland in 2014 on the 'Generation of 68' poets. She currently resides in Canberra and is working on her first book on Australian poetry history. She has previously been published in Cordite, The Australian Poetry Journal and Southerly.