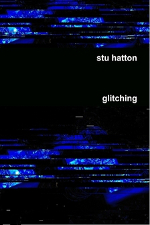 ‘Glitching,’ sharp and immediate, is a – word that sounds like it belongs to this modern internet and computer age: moments of fracture as a website struggles to load, fragmented by popups, weird demands of your exact location and the failure of Flash to connect properly. It suggests twitching and distorting monitors, the crackle of an old modem and illogical videogame surrealism, frustrations and interruptions ‘Not of substance but of form’ (‘entheogen’).

Stu Hatton’s book, Glitching, is true to this contemporary sense of the word, laying bare a poetry that often seems to have been ground through the blunt binary language of computer programming. Like the 1s and 0s of binary code, Hatton’s poems are largely visual, his language jerking between, even through, various grammatical signs – dashes and slashes, ellipses and parentheticals, question and quotation marks. The effect is a sense of broken transmission, often leading the reader to moments of distracted or disappointed insight:

The question – pertaining perhaps to a sense of poetic tradition – dissolves, the slashes acting like internal line-breaks, as the speaker evasively resorts to non-sequiturs and blunt, ‘coupled’ syllables. Whatever is being projected belongs to the poem: ‘hedges & trades (they | ride within / the system.’

Glitching has an autonomous sense of itself as this kind of self-sufficient ‘system’ – a notion taken to its implausible limit in Ashbery’s ‘The System’ in Three Poems. Yet, as with Ashbery, the disconnected speaker persistently finds this ‘system’ to be breaking down, acting on its own accord. An early poem asks: ‘though who uses anything | for its intended purpose?’ (‘art in the age of digital reproduction’). The question is self-reflexive, considering the dominant strand of language throughout the book that resists any familiar, communicative transmission. Poems frequently turn to juxtaposition, word-play and sound, opening up (mostly) common and contemporary language to a perspective that asks the reader to be aware of the simultaneous connotations at work. ‘virus (for Kat / props to Laurent Garnier)’ edges close to sound-poetry, as denotation is lost to the need for rhythm and rhyme, in what appears to detail a kind of hectic night club:

Giving some stability to the chaos, Glitching is arranged in 10 different, titled parts – ‘entrances,’ ‘detours,’ ‘glitching,’ ‘wasted,’ ‘couplings,’ ‘futures,’ ‘midways,’ ‘soil,’ ‘entheogen,’ and ‘exits.’ These titles suggest a sense of thematic unity reliant on the title of the particular section, and even a narrative, leading from ‘entrances’ to ‘exits.’ Yet, although one may ‘enter’ and ‘exit,’ the space between is utterly open.

The titles themselves, then, are far from stable. The plurality determined by the somewhat awkward use of s points to different possibilities of meaning: different ‘entrances’ and ‘detours’ into, and from, the poetry. The present participle –ing suggests that the poems are of their present moment, but are highly active within it. While the presence of ‘soil’ in a text seemingly far removed from such physical substances and the transformative agency of ‘entheogen,’ expresses a further mutability in the work. Thus, the first poem in ‘soil’ looks to cities, which are, essentially, the contemporary element from which things – people, technology, ideas – seem to sprout: ‘City & colour. Know this as sepia-grey. The talk of those convincing themselves they like to be caged.’ (‘city soil’). Glitching resists exact knowledge – it is ‘sepia-grey’ – launching from the vagaries of its titles to explore the ambiguities, and pluralities, of how we grow, move or exist.

Even when Hatton slides into prose, the language is still projected in a strangely uncomfortable, distanced voice. It adopts the hollowed and formulaic language of tourism – well-aligned in ‘detours’ – but also defamiliarises (poeticises?) it by overworking various trivial details, speaking a ‘deceptive English’ to give colour to a sales-pitch:

A conventional form is given to unconventional imagery. In another prose-poem, ‘refuse,’ the sense of any coherent syllogistic movement between sentences is challenged. The speaker jolts from question to action to feeling, strung together limply by colons promising an (inevitability disappointed) elaboration:

The title is indicative of the ambiguities at work. Two meanings of ‘refuse,’ in reference either to the act of declining or garbage, each have relevance to the poem which ‘refuses’ a clear meaning – ‘Naming will not keep pace.’ The poem also subsists on the ‘refuse’ matter of its intertextual references – ‘Derrida’ and ‘Creeley’ – and usage of, even emulsion in, technological/computer terms – ‘downloading,’ ‘Log out, log back in again,’ ‘deleting old songs,’ ‘Driver error,’ ‘beserker-bots in Timezone,’ and ‘Hyperrealism of hi-definition.’

It is this sense of ‘refuse’ as garbage which allows for a reconsideration of the seemingly strict adherence to our current (ever passing) form of modernity that marks Glitching. On one hand it is a text composed of signs emptied of, or in the act of emptying, context, considering the modern world’s social disconnection – ‘no signal, no receiver … (a displacement)’ (‘poem’) – embodied in the forms of his brief meditations or incomplete transmissions. Yet, on the other, it is a book that reveals a debt to Dadaist MERZ (garbage) collage and other similar Modernist avant-garde practices. The ‘Notes’ at the conclusion of Glitching explain some of the poems’ procedures and collage sources, noting, for instance, that the collection’s first poem, ‘amor fati,’ is a phrase attributed to John Cage: ‘Begin anywhere.’

Above all, gltiching seems drawn to the stark minimalism and prose-poetry tradition of Pierre Reverdy who is given his own ‘props’ in ‘after reverdy (for Paul)’:

The poem is as clean a pastiche of Reverdy as one is likely to encounter, noting the French poet’s frequent use of ‘portals,’ ‘nothing,’ ‘walls,’ ‘houses,’ ‘sleep,’ ‘dust,’ ‘birds’ and the ever-present sense of a ‘task.’ Moreover, Hatton utilises Reverdy’s profound, open-ended questions, often unanswerable, and deliberately ambiguous wordplay – ‘overcrowding of seeds’ could be ‘overcrowding of streets.’

In an age oversaturated with the invasive presence of technology, where we find ourselves fixated by screens, eyes cast increasingly downward to ponder the latest message on our smart-phone, Hatton finds in Reverdy a directness of language removed from the generic drone of a PC and omnipresence of social media. The poet takes ownership of the paradoxically fluctuating stability of poetry and language:

Although his poetry is clearly more unruly, resorting to a kind of literal fracture and discontinuity that are very much Hatton’s own, Reverdy’s minimalism lends the poems a sense of reflection and immediacy which is crucial to their success. In this way they move beyond being explorations in breaking up and reassembling language as if the poet is merely a computer writing what it thinks to be poetry.

This entry was posted in BOOK REVIEWS and tagged David Dick, Stu Hatton. Bookmark the permalink.
David Dick is a Melbourne based writer, critic and poet. He has been published in Cordite Poetry Review and otoliths.