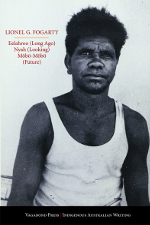 Lionel G. Fogarty is an indigenous Australian poet who is recognised for the excavation of a poetic space in which, as Michael Brennan has written, ‘his community and culture is recuperated and asserted’ whilst ‘dominant discourses, both political and poetic’ are subverted and destabilised.1 These qualities make Fogarty’s work difficult to review in a context in which the status of indigenous literature remains, for some institutions at least, seemingly unapproachable. Should it be assessed by the same criteria used to establish the literary value of books by people writing from within or through the dominant culture? Should it have its own awards, judged by indigenous cultural producers? Or would such a process work as a form of exclusion, a kind of interventionist management of ‘problem’ literature? Does the work of indigenous writers, with its access to the innate power of a specific historical situation, have an advantage over the work of writers faced with less urgent concerns? Or is justice, as certain western philosophers say, ‘for all or not at all’?

The inconsistencies with which the matter of indigenous literature is approached show that the mechanisms of its reception are still in the process of being worked out. For example, the Victorian Premier’s Literary Award includes the biennial Award for Indigenous Writing but unlike the awards as a whole there are no individual categories. Indigenous works of whatever form are lumped in together. Although indigenous-authored works may also enter the relevant categories of the main awards, it just doesn’t seem historically, politically or aesthetically reasonable to pit poetry, for instance, against fiction. The main awards also have a category for best book overall, however, so perhaps it’s all about equality. The Western Australian Premier’s Book Awards, like the Tasmanian Literary Prizes, will now be awarded biennially. Neither have a category for indigenous works. The Queensland Premier’s Literary Awards were done away with by their recently deposed namesake. The renamed Queensland Literary Awards, funded last year by donation, are in the process of formulating categories for 2015.

It doesn’t take much investigation into the recipients of the smaller prizes and awards or the roll-call of reviewers and published poems in general before you need to remind yourself that, yet again, as Celan knew, ‘it all depends / on you’. ‘On inconsistencies rest’ is best. But who is ‘you’ in this situation? The writer, the woman, the sorry white person, the paid-up/paid-off member of the bourgeoisie? A recent poem by Sydney poet Pam Brown sums up the broader situation:

In Fogarty’s latest book, Eelahroo (Long Ago) Nyah (Looking) Möbö-Möbö (Future) , Gilbert and Noonuccal, the ‘Black man woman’ pillars of Australian indigenous literature, seem to signify a kind of split-Christ to Fogarty’s wandering St Paul. The poem ‘CAUSED US TO BE COLLABORATOR’ acknowledges the debt:

We’re conditioned to think of poets as legislators rather than followers, so what is there to say about the idea of Fogarty as an apostle rather than a prophet? You might, along with the radical Jewish theologian, Daniel Boyarin – who thinks of Paul as having attempted, in his reinscription of the signifier Israel, to allegorise the jews out of existence – find the analogy abhorrent. For Boyarin, ‘The appropriation of the story of a particular tribe, with all that marks it as such, as the story of all humanity’ contains a peculiar logic of ‘exclusion by inclusion’.3 Or you could, as with the Italian philosopher Giorgio Agamben, nominate Paul as the father of poetry and see in Fogarty’s new collection a drawing together of the past, the present and the future that conjures Paul’s recapitulation of messianic time as ‘the time of the now’. As Agamben writes:

[…] messianic time – insofar as what is at stake in it is the fulfillment of times – brings about a recapitulation, a sort of abridgement of all things, both heavenly and earthly – a vertiginous consummation of the whole history, in which all the events which occurred from the creation on are summoned to appearing in the messianic now.4

For Agamben, the structure of the modern poem along with the romance lyric from which it stems functions as a ‘small-scale model’ of the messianic recapitulation that structures Paul’s Letter to the Romans. Where ‘The poem is thus an organism or a temporal device which from its very beginning is tensed toward its end’ and ‘there is a kind of eschatology internal to the poem’, Agamben thinks of ‘The sestina – but in this sense every poem’ – as a soteriological machine. Soteriology is the study of religious doctrines of salvation and the emphasis on study is important in Fogarty, even if the attitude towards it will always be ambivalent – ‘So just because we will never change the way they wrote, we can learn look and sit for the teachings,’ (‘CAUSED US TO BE COLLABORATOR’), he’ll write, and then in ‘CONNOISSEUR’, tear vituperously and hilariously into the institutions of ‘philosophy theory and encyclopaedia’:

Institutions in general get a good talking-to, in a loving, and sometimes not so loving, multi-faceted kind of way. ‘GALLERY MANSIONS MURDERS’ castigates cultural elites who stage arts festivals while ‘We are dead with a cent of life’s happy nestings’. The poem finds racism of Hansonesque proportions even at the heart of those institutions that would seem to be most critical of it – ‘The guardian fate of racist is late / to festivals please explain’, invoking Boyarin’s observation that ‘At the very site of Paul’s main argument for tolerance of Jews, I find the focal point of his ultimate and unintended devaluation of Jewish difference.’ But even Fogarty’s most vicious tornadoes leave their subjects airborne rather than dismembered. ‘VARUNA HOUSE’ wants to remind Eleanor (Dark but ‘not a dark woman’) that ‘From hills to lip off mountain mouth / Came the first Australia writers’. Spiralling from within the home that the writer thought ‘was in bush but found it’s as newborns everywhere’, the poem gathers and twists: ‘The laughter was hard to hear animal’s bird but the rushing howling winds air in my body to give another body song sang written words to the woods dead.’

Messianic time is ‘the time of the now’ and one of the many ways in which the past and the future are drawn together in Fogarty’s poems is through the use of the time code and date stamps that append most of the poems in the book. A number of significant poems purport to have been written between 7:00pm and 10:59pm one Sunday evening. Others were written in Bangkok, Merton and ‘anywhere’; on Sorry Day, ‘at the Eye of the Storm Festival’ and ‘on the day J. C. got killed’. This usage reminds us of Alain Badiou’s conception of the poem as ‘an active thought’ that brings forth from language ‘a coming to presence that was previously impossible’.5 It can also summon the convention of the police report as in ‘MURGON BRAWL CHERBOURG BRAWLS’ (To Kurt & Nanny Fisher, Sunday 8.39pm 2011-01-09). Fogarty has said that ‘Deaths in Custody is the most important subject in my poetry, as well as Land Rights and general struggles of national affairs.’6 As the first poem in the book, it sets up the problematisation of race, identification, justice and authorship to come – ‘Maybe all bad cops and bad blacks / Should go over goori for fighting ground next.’

The stand-off between settler and indigenous law generates Fogarty’s poetics and it’s astonishing to watch him go right to the heart of the Christian theological doctrines that underpin white structures. One of the reasons Agamben thinks of St Paul as a poet is because he invented a new language that could deliver the new ideas he was trying to disseminate. Paul, like Kafka and Celan, was exiled from within, a Greek bureaucrat responsible for persecuting Christians, who was also a Jew. His conversion on the road to Damascus caused him to give up on his duties and set about establishing a new universal religion. To do this he positioned himself at the weak points in ‘the old’ and started digging. If the analogy between Fogarty and Paul is in danger of figuring Fogarty as nothing more than a dupe or reduplicator of Christian tropes we only need to look at the anxiety that his excavation of language provokes to realise there is something new at hand.