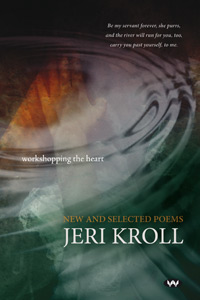 Workshopping the Heart brings together poems from Jeri Kroll’s five previous books of poetry, with thirty or so pages of new poems and the opening chapter of a verse novel. Her distinctive voice – lyric, tough and spare – is evident early. Take the poem ‘Genus and Species’, in which the speaker recounts visiting her grandfather as a young child:

Kroll’s concision and her talent for arresting imagery is apparent here and elsewhere:

Internal rhyme is used to particularly striking effect in the poem’s resolution, which is reminiscent of the childhood poems of Gwen Harwood and Elizabeth Bishop:

The book’s middle section focuses on the domestic and familial. Hamlet presents the world as a prison ‘in which there are many confines, wards and dungeons,’ similarly Kroll employs a deft conceit to tell us:

Her lyrics on motherhood are compelling and unflinchingly sharp – never collapsing into sentimentality. There are moments of tenderness, in which the speaker is besotted with the beauty of the infant:

In other places, the demands of the present interrupt meditation and love battles with darker impulses, as the speaker struggles to retain sanity:

Such battles often end in a hard-won synthesis of dutiful, yet jaded, resignation:

In later poems the son’s childhood and his absence in adulthood are movingly evoked. I can recall few poets, in Australia, who have written, so consistently well on this theme.

The poet’s mother is central to the final part of the selection, as Kroll describes the effects of Alzheimer’s:

The literal sea that the poet’s mother lives beside is now ‘dolphin-smooth’ and ‘[n]othing worth comment breaks the skin.’ These lines articulate a terrifying banality: dolphins – with all their mythical associations – are unremembered and unseen, nothing breaks the skin of the water and the speaker’s viewpoint fails to break the surface – fails to communicate.

‘My mother’ later becomes ‘the mother’ – as if she were shedding personhood; her degeneration increasingly harrowing for the speaker, who retains the consciousness the mother has lost:

Aging and death are revisited in thirty pages of new poems. In ‘Skin’, ‘furrows … remind us that the past is getting closer’, and soon skin ‘is all we can remember’. The new work has a similar epigrammatic quality but these poems have not been through the same winnowing process and the weakest lack the interest and strangeness of metaphor so consistent throughout the rest of the collection.

The book concludes with the opening chapter of Vanishing Point, a forthcoming verse novel. If Kroll maintains the lyric intensity of this taster it is sure – as this New & Selected is – to be a great success.

This entry was posted in BOOK REVIEWS and tagged Aidan Coleman, Jeri Kroll. Bookmark the permalink.
Aidan Coleman is a Visiting Research Fellow in the School of Humanities at the University of Adelaide. His two collections of poetry, Avenues & Runways and Asymmetry, have been shortlisted for the New South Wales Premier’s Kenneth Slessor Prize, the Adelaide Festival Awards for Literature and the Western Australian Premier’s Book Awards. He lives in Adelaide and is currently writing a biography of John Forbes with the assistance of the Australia Council.