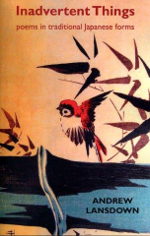 Andrew Lansdown’s poetry has long been defined by the primacy of the image and a preoccupation with form. Inadvertent Things revisits the themes of nature, family and God through the familiar Japanese forms of tanka and haiku, and also the choka, a sort of extended tanka. The haiku is the form that features most often and always as part of a suite called a gunsaku, where the poems work independently but also cumulatively. All the terms are explained in a short introduction for the uninitiated, in which Lansdown expresses his intention to follow the spirit rather than the letter of the law.

As in Lansdown’s other collections, small details matter. Take the tanka ‘Azure’:

Lansdown’s imagery is precise and inventive. The tanka ‘Caress’ is simply one perfectly realised simile:

As in the best translations of classical haiku, seemingly unremarkable details, captured through unadorned language, can produce a satisfying whole in which every syllable counts. This is the first part of ‘Loquats’:

It is not only the simple but exact choice of words that appeals but the way the syntax unfolds, withholding completeness until the final word sends the reader back to the opening line, creating a perfect circle.

Humour is employed throughout Inadvertent Things, not the laugh out loud kind but the kind to make the reader smile in recognition. This haiku from ‘Frog Cacophonies’ is worthy of the Japanese master Issa:

Other poems play self-consciously with the idea of form to pleasing effect. ‘Crab Shell Haiku’, for example:

But for all the fine poems in the book – and most of them are good – others fall short. There are places where the writing is overly cute, as in the final haiku of ‘Pygmy Bat’ and the second part of ‘Jonquils and Daffodils’:

The abundance of poetic devices is cloying and the effect of the rhyme above (and in a few other places) lands somewhere between a haiku and a rhyming couplet. There are chokas in the book where rhyme is effective, but rhyme rarely works in haiku because it tends to draw attention to itself and complete or close off at the expense of the meditative quality that is the form’s chief appeal.

In other cases, the lyric is prosaic or flat. The following parts of ‘Birth Haiku’, for example, lack the surprise or the interesting juxtapositions that characterise classical Japanese haiku:

The inclusion of such material is unnecessary because Lansdown has always been prolific and this book – stretching to 161 pages – could easily have been shorter.

Lansdown is one of our best writers of haiku and poetic miniatures and, for those interested in Japanese forms, this attractive volume is worth purchasing. For those concerned less with such forms, other books by Lansdown, such as the award-winning Between Glances, will be a better introduction to the poet’s work.

This entry was posted in BOOK REVIEWS and tagged Aidan Coleman, Andrew Lansdown. Bookmark the permalink.
Aidan Coleman is a Visiting Research Fellow in the School of Humanities at the University of Adelaide. His two collections of poetry, Avenues & Runways and Asymmetry, have been shortlisted for the New South Wales Premier’s Kenneth Slessor Prize, the Adelaide Festival Awards for Literature and the Western Australian Premier’s Book Awards. He lives in Adelaide and is currently writing a biography of John Forbes with the assistance of the Australia Council.