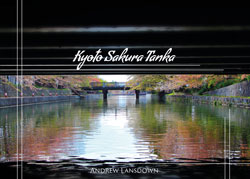 Through a series of visual and textual explorations, Andrew Lansdown’s Kyoto Sakura Tanka creates a striking depiction of the bicameral, separating his collection into kami no ku (the poet sees) and ashimo no ku (the poet wonders). The fundamental basis of Lansdown’s series is rooted in the Japanese tanka, or traditional waka: a five-line piece of poetry divided into mortas, or syllable counts, of 5/7/5/7/7. Yet, in this series, Lansdown once again takes up the themes of nature, transience and master Bashō’s doctrine of fueki ryūkō – ‘permanence and change’ – only to position himself against his chosen poetic tradition.

Lansdown’s self-assigned task in this collection is twofold: he is disruptive to form and yet desires to remain meaningful. Notwithstanding bold innovation, Lansdown’s tanka captures the precision of haiku in its brevity while simultaneously preoccupied with fresh visions of the Imagist tradition as a means of cognitive exploration. Each poem takes the reader on a poetic detour of Kyoto, which furnishes new significance for this microcosm of Japanese culture and tradition. Of course, small details and Lansdown’s exquisite precision of language are not definitive, yet they are specific enough to keep abreast of fueki ryūkō as a necessary innovation to the waning presence of the tanka in contemporary poetics.

This perception of the ‘bamboos’ awakens us to a dual significance in what remains once the bamboo undergoes metamorphosis. In the heavily codified realm of traditional Japanese poetry, waka’s select poetic words allude to a multitude of connotations and prescribed associations. Within ‘Volcanoes’, ‘bamboos’ embody the perpetual vitality of nature itself or are presented as ‘extinct volcanoes’; nothing more than an awareness of the impermanence and delicate im / perfection of things, characterised in the Japanese aesthetic of Wabi Sabi. This idea is also demonstrated in Lansdown’s ‘Off-Pivot’:

The ‘shishi-odoshi’ is an imperfect metaphor for the realisation that things are lost to us even as they are found, characterising the traditional subject of seasonal change and awakening thoughts of the transience in and of nature. This motion of ‘lifting’ and ‘falling’ is similarly presented as involutional, the motion from past to present, present to past, which thus allows the past of the classical tanka form and Lansdown’s contemporary poetry to embrace and inform each other in the dynamic immediacy of present vision. This is literally and figuratively realised in the accompanying photography. In this way, Lansdown’s poems offer an aesthetic ideal that uses the uncompromising touch of mortality in ‘Volcanoes’ to focus the mind; and, in ‘Off-Pivot’, to provoke a sharp, intuitive discovery in order to get the essence of life and fueki ryūkō, infused with tradition and abruptly disturbed by ‘the haunting hollow bamboo sounds punctuating the temple garden’ (‘Shish-odoshi Hauntings’).

Of the haiku, Lansdown adopts hyperbole and repetition as a kind of foil to the elegant poeticism of the tanka, and a contrast to the worldly realism of ‘vulgar’ rhetoric, only to then re-poeticise them. Set within the language of common speech and his perceptions, Lansdown utilises the poetic diction incorporated in the haiku to entice the reader to review the everyday life of contemporary Japan through aestheticized eyes, thereby authorising new subject matter as worthy of the grand tanka tradition:

The consonance of ‘cherry’, ‘cheeks’, ‘whiteness’ and ‘witness’ is used here to emphasise the ephemeral beauty caught fleeting in the sakura blossom and Lansdown’s wife, Susan, to whom the text is dedicated. Normally, of course, this sort of cloying reiteration would be very obvious. It stands out here, however, as an evident anomaly within the minimal scope of 31 syllables, where its imagist inclination depends on verbal economy, the reverential ‘pink flush in the whiteness’ resonating with ‘regard as witness’. Lansdown employs the exact word, not the nearly-exact, nor the merely decorative word, but hypostasises love and consciousness as qualities of nature itself. Through the alliteration of ‘Sakura, Susan’ he reveals that both figures are invested in an immense environment, not distinct from it, but, as determined in the adjoining poem, in a mutual, inexplicable process of eternal blending and appreciation of natural beauty:

The result is a vision of human presence framed against an interfusional setting, that is, nature is not presented as an otherness distinct from Susan, but as a shifting perceptual field that is so ‘beyond white in purity’, that it is ‘quite beyond seeing’. This quiet process, whereby humankind and nature appear perfectly continuous and productive of each other, displaces consciousness into all things – human and inhuman – in such a way that cognitive and emotional qualities ordinarily belonging to the human are seen to anticipate an amorphous and embracive environmental unity of seeing and feeling. In unifying nature and the human, the marriage Lansdown celebrates is rooted in the Japanese concept of ‘furyu’, which literally means ‘in the way of the wind and stream’; Sakura and Susan presented as within a liminal zone, which the reader, as ‘Witness’, must occupy to realise Lansdown’s vision of the ‘Bride’.