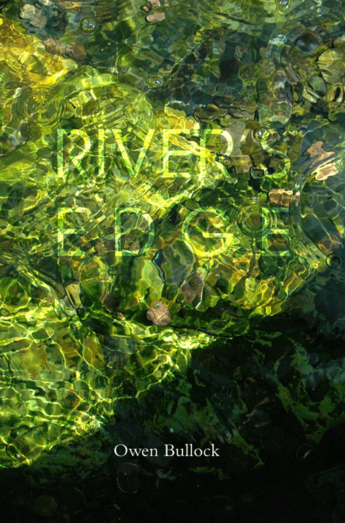 Owen Bullock stated in his ‘The Breath of Haiku’ article in Aoeteroa that ‘the modern haiku can be about anything, not just nature’. Readers of his previous collection, Urban Haiku (Recent Work Press, 2015), will be well aware of this position. Preferring to focus on the human and blur the distinctions between haiku and senyrū, haiku of human nature as opposed to the world, Bullock’s latest collection, River’s Edge lends itself well to investigations of textual forms.

The individual lines featured on the back cover hint at what lurks beneath the surface of River’s Edge: a focussed recollection of the wisdom and experiences of a variety of people that brings together multiple viewpoints at once. Like a recipe followed by heart, unpretentious and yet demanding, each poem represents the attempt to preserve the moment – at a loss to see clearly beyond the titular river’s edge:

Above all, the collection’s appearance is deceptive – while the haiku are characteristically brief and simple, they are intricately crafted and mindful as memories resurface and are subsequently overtaken, as expressed by the overtaking waves of the poem above. Sometimes as unobtrusive as a passing phrase about cleaning the mantel within someone’s home, the text demonstrates the advantage of a form that omits so much and yet hints at what is left unsaid, as revealed within the establishing haiku:

By no means the last poem about seemingly irrelevant moments that at times evade understanding, words are rendered particulate within these fragments, the lines unstable and language suggestive of the personal. From the first page, Bullock appeals to the reader to not simply be satisfied with aphoristic haiku, inviting them to peer beyond what is printed on the page and read between and across the lines. For example, consider the following poems:

In these two instants, the reader gets the sense that each line could be interchanged, omitted or exchanged within the individual haiku and considered a stanza within a larger poem. The potential of the ‘unlit candle’ in the concluding line of the first haiku to also serve as the establishing line in the adjacent poem is refreshing and reveals the multiplicity at the centre of the text, the potential for a myriad of interpretations and perspectives. These meditations on memory celebrate dislocation and uncertainty. Despite the repetitions of ‘I’ and ‘my’, the collection seems to relinquish a sense of possession:

In this instance, Bullock suggests an ever-evolving experience and perception, one that is simultaneously informed by the speaker and referential to the reader. The reader approaches the collection with their own experiences and memories, ‘walking a road / I drive daily’ and Bullock, considering these several perspectives, offers ambiguity, ‘nothing familiar’, leaving readers with the feeling that what they’ve just read might be their own recollection. Suggestions for co-creation are hinted at in the text’s lack of a context or titles, in what might be considered an attempt to disavow ownership of words or narrative. Consider the following, from the middle of the collection:

Above all, these meditations on individual and collective memory centre on the creation of a nebulous and subjective experience for the potential reader. This is not to say that Bullock doesn’t make space to return to tradition, such as in the vertical poems that appear in the collection:

These poems serve similar objectives to the poems described above, but Bullock’s decision to write certain haiku vertically may be considered a return to traditional Japanese haiku structure. The decision represents a further challenge to readerly expectations. With no syntax and cut to infer tone or emphasis, the reader determines the rhythm. The implications of these unfolding observations are determined by and revealed according to decisions known only to each individual reader.

It is the collection’s unpredictability and capacity to ‘reanimate old meanings and words to reflect radically new contexts’ (‘The Breath of the Haiku’, 48) that makes River’s Edge worth reading more than once. Held in an opaque, regenerative temporality, the instants sustained within this simple paperback are brief, captivating and ever evolving: