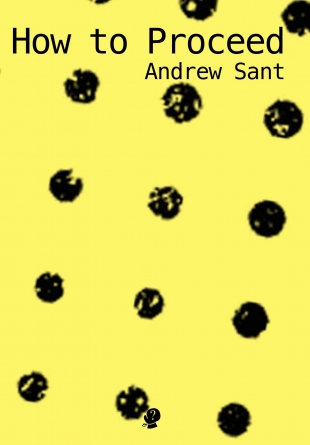 How to Proceed by Andrew Sant
Puncher & Wattmann, 2016

How to Proceed is a quandary understood simply by the implication that to proceed is a question, cognisant of the necessity of an answer but ‘more reality without one’ (‘On Consuming Durables’). Utilising a form that shakes off uniformity, categorisation and constraint, Andrew Sant’s collection of prose essays, quite the divergence from his ‘stock-in-trade’ poems, envisions ‘ever-expanding terminals to itself’ (‘On Airports’) and consistently toys with the ideological complexities ‘On Discovering How to Proceed’. Peripatetically tracing literary excursions on the fringes of the personal and, contrarily to the preceding statement, the knowledge that ‘taking flight doesn’t involve some kind of personal commitment’ (‘On Airports’, p. 30), Sant’s essays deploy and redeploy ‘miniature windows […] into other worlds’ (‘On Only Children’) and endeavours to ‘make a statement without implication – state a fact of life’ (if such a thing is possible).

The text is made up of sixteen essays, all adopting varied and general concerns, tracing a literary pilgrimage of ordinary experiences in mundane settings, from personal anecdotes of a bridge tower conductor in ‘On Employment’, to the dilemmas of commitment in ‘On Marriage’ and terminating in ‘On Curiosity’. The establishing essay, ‘On Consuming Durables’, sets the disruptive and staggered pace for the collection, the multitasking fluidity of writing moving haphazardly from a BBC report on the proposal to ‘restrict the number of charity shops in any one high street’, mediating on the author’s personal exploits as a ‘user of charity/opportunity shops’ and a rendering of his experience with a ‘famous English actress’, who he theorises has ‘dressed down [… to] gain the personal freedom that comes with anonymity’. These diverging frames of reference shift from one sequence to another in centrifugal and centripetal fashion, as Sant describes in ‘On Time’, ‘more like an ocean than a rapid. Both’. The ‘On’ beginning every new essay signals the collection’s pliability, a tapestry of polymorphic prose that is insistent on ‘entering into and being involved in a rich social situation’, such as the wider world view addressed in ‘On Only Children’:

Eventually, I would have occasion to visit for some months a country where selfish, only children, a few of them, are born to rule: China. One child. It’s a policy I’m qualified to comment upon. Think of it: millions of people, a generation, with a higher-degree than normal of self absorption, all reaching maturity and need to co-operate in society.

‘On Discovering How to Proceed’, through Charles Lamb’s Essays on Elia and Mark Twain’s writing, ‘the reader never knows which part of life and attendant thought [Sant’s] going to parachute into next. It’s disorientating and delightful’. The debt owed to these two authors in the above quote from Twain, serves to determine that to make ‘accurate progress toward our destination’, the journey is ‘clearly as important, no, more than important than the prospective arrival at a destination’. To further quote Lamb, ‘you may derive your own thoughts from others; your way of thinking, the mould in which your thoughts are cast, must be your own’.

Indeed, How to Proceed is significant for its deft exchange and transformation. In ‘On Walking’, Sant remembers that, ‘as a family, we were walkers – especially on holiday’, however, as the ‘present supplants the past’, the memories associated with these events (‘what kind of leather my father wore out or what child-size boots were compulsory for me’) would ‘never make any purposeful entry into the present again’. This jettison, ruthless fragmentation is a warning to the ‘somehow contemporaneous – ‘eternally present’ as T S Eliot said’ (‘On Time’). The revival encountered later in the narrative, ‘revisit[ed] via the poetry of William Wordsworth’ and then grafted onto the clear views at the summit of Green Gable, are prophetic of the subsequent chapter, ‘all time, past, present and future’ is ‘consistently beyond comprehension’, but it is time’s suppleness, its revived eternal state, that encourages the readers’ projection and identification (‘On Time’). Sant’s ‘On Walking’ and ‘On Time’ muse that history, subjective and objective, is susceptible to the ‘ritual of transience’ (‘On Being Transported’) and through perspective,

the mind imperceptibly retunes itself, pleasurably perceives, via the optic nerves, intentness on fellow human faces […] and, with luck, no significant hazard or challenge in sight, ideas may declare themselves, freely transformative – or else, as if locating a familiar rhythm, memories may emerge of early excursions, and of other dimly remembered experiences, long held in store, now finding their way into the open, released into the abundant yet partial light of the present’ (‘On Walking’).

In ‘On Self Knowledge’, it is curious to recognise that change can be ‘subterranean, faster flowing’ than the reader can possibly conceive. The miniature worlds collated within this collection are sentiments reconciled by those of us who pick up this text and ‘satisfy our curiosity [on How to Proceed] not by endeavouring to solve significant mysteries’ but ‘mostly by seeking experiences: eyes, nose, tongue, fingertips, greedy for immediacies (‘On Curiosity’). In charting the mundane through this hyper-charged sensitivity, Sant’s essays invite varied interpretation and, seeing as ‘there’s a lot of territory to cover’, a declination to the subjective and singular outlook (‘On Consuming Durables’). The collection is an evocative and pleasurable verbal excursion, more concerned with ‘how to proceed in a really testing circumstance’ than an indication that we are ‘making accurate progress’ (‘On Discovering How to Proceed’).