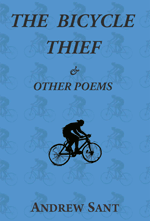 It’s no current reference, but reading Andrew Sant’s recent collection, The Bicycle Thief, Andrew McGahan’s Praise springs to mind. When I studied McGahan’s novel, a more astute student than I pointed out that Gordon’s only romantic relationship was with his car, and that, accordingly, his only romantic response was towards the sad demise of that Holden. His relationship with Cynthia (who he develops a relationship with) was conversely defined by emotional inertia and moral detachment. This observation struck me as highly sophisticated. It did not endorse a clichéd view of Australian men and their cars, rather it subtly suggested a masculine romance for an idyll of mobility.

I think that for all the mischief and conversational flare of The Bicycle Thief, Sant is a romantic. Sant constructs a romantic idiom around various modes of transport that is not simply commodity fetishism, but as with McGahan, a desire for transcendence through acceleration and movement. There is no strict narrative progression yet the collection does riff around the twinned themes of movement and stasis. Somewhere in the middle of the book the speaker presents an Ur-scene in ‘Jack and Yves and Their Many Transports,’ where children are observed locking language to movement:

One of Sant’s great gifts is this ability to wed naturalness with thematic abstraction. The allusion to a kernel of the poetic form – metaphor, language in movement – is light and unburdened, and always keening to the particular rather than the general truth.

Sant’s poetry also insists on nearness – ‘I,’ ‘you,’ and ‘we’ surround the reader as she is increasingly embedded in the personal address. This address reaches an early climax in the eight-page ‘The Motor Car: A Personal History,’ which delivers on the promise of its title through a catalogue of cars that have come into the speaker’s life. It’s part David Copperfield, part confessional poem:

There’s a lovely unreliable charm here that is consistent with the collection’s allergy to seriousness, even as the task of personal reconstruction invites unflinching rigour. The playfulness applied to these undertakings is underscored by Sant’s subtle half rhyme, which appears throughout the poem: ‘Number plate/ 177 EMG. It was code// to enter the quick, slow/ everlasting story of British roads.’ Yet the poem is no folly. The tone is often self-deprecating but the method is attentive and thoughtful: ‘Skip some years – the panic attacks/ in traffic jams. This/ is an accelerated, partial history.’ Charting a life through this conceit is fruitful and constructive, illuminating the speaker’s impatience with stasis as the verse careens from one vehicle to the next.

Appearing at the end of the collection, the title poem literalises the crisis of Sant’s mobility narrative. The theft of the speaker’s bicycle brings about a moment of truth, or at least a confrontation with what stasis might signify. The drama of ‘The Bicycle Thief’ unfolds in casual class-phobic speculation (‘You know the type. He needs a bike), but as the poem develops, it locates the problem of mobility precisely at the intersection of class and race in suburban Australia. Although the speaker is initially helpless before ‘[t]he absence, next to the wall,/ […] exactly the size/ of my bike,’ it is the young man who is profoundly stuck, caught by the web of class and race expectation: ‘You’re a bad lot, you Muldoon’s, corrosive.’ The bicycle thief becomes the speaker’s fantastic other, upon which accelerant desires may be projected but perhaps poignantly left unfulfilled:

The gesture of good will here is earnestly made, signifying a transmission of romance – a young man’s wild dreams – across generations.

Perhaps this exuberant paternalism is a major feature of the collection, Sant’s twelfth. But it is no easy task to decide upon one defining aspect of what is a pleasingly loose gathering of works, which along with mobility pursues themes around loss, ecology, temporality and personhood. This last is richly explored through recurring figures of anthropomorphised animals and animalised humans, mixed in poems such as ‘Animalia,’ ‘Loose at the Zoo,’ and ‘In the Villa Gorilla.’ Sant’s framing of women is at times unsettling, where, rather than the bicycle thief, it is an abstract ‘woman’ so often poised to doom the dream of mobility. Nowhere is this more apparent than in the tongue-in-cheek ‘The First and Last Ballad’:

In strict abcb form, the poem is the only piece in the collection that adheres to full rhyme, and the cyclic effect is claustrophobic and deadening. Is this playful sour grapes, or a more pessimistic broad view of the feminine? Overall, the collection is a wide-ranging account of a rich life, awake to the possibilities of unfettered energy, but ironical, self-deprecating. But for all the doubts aired Sant writes with confidence and charm. The first line of the collection, in ‘Lost Things,’ cannily predicts the fate of The Bicycle Thief in a moment of reflexivity:

This is characteristic Sant – warmly welcoming his reader to the mischief. The Bicycle Thief presents Sant’s delight with the possibilities of language in transit, language as vehicle. This is poetry for lending, sharing, travelling – this collection wants to move.

This entry was posted in BOOK REVIEWS and tagged Andrew Sant, Lucy Van. Bookmark the permalink.
Lucy Van writes poetry and criticism. Her collection, The Open (Cordite 2021), was longlisted for the Stella Prize, shortlisted for the Mary Gilmore Award, and highly commended in the Anne Elder Award. She is a Senior Research Associate at the University of Melbourne.