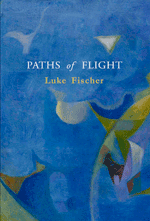 In Shakespeare’s last great poem, The Phoenix and the Turtle, the owl is banished from the allegorical proceedings of the bird funeral:

Whether you read this poem as dense figural allegory, enigmatic elegy or refined coterie poem, you should mark this ironic moment of exclusion. The tradition of augury in poetry is richly prefigured here, not only in the careful inclusion and exclusion of birds, but in the deceptive formal simplicity of the stanzas. Devolving into triplets in the threnody coda, the rhythm of the poem is incantatory, reminiscent of the magic of prophetic language. Why, then, the prohibition on the augur owl?

Luke Fischer’s first collection, Paths of Flight, is deeply alert to the signs made by birds. Fischer displays an affinity with a certain notion of the ‘natural’ world, as well as a temperament for classical poetic tropes. Birds, depicted in both mythical and parochial attitudes, populate the collection. And while not every poem depicts the physical manifestations of a bird, many actually do. The owl keeps ‘vigil in a cell/ of twisted boughs’; the swift’s brow is ‘planed by supernal winds’; the punk cockatoo ‘flares his pineapple Mohawk.’ Conversely, more enigmatic figures are infused with bird-like qualities. The first line of the collection, from the poem ‘Portrait of a Thinker,’ is unequivocal: ‘His eyebrows are falcon wings/ gliding on a constant current.’ There is a certain satisfaction to be taken from such thematic consistency. Like Shakespeare’s poem, Fischer’s book takes up an allegorical mode, calling forth the presences of ‘Owl,’ ‘Swift,’ ‘Corellas,’ ‘Raven,’ and a ‘Band of Cockatoos’ through the direct titles of the poems. The collection’s undertaking as a work of augury is emphasised by its omnibus title. How do we read a bird’s flight, which once foretold the will of the gods? What is the relation between poetry and prophesy?

I’m making this sound unnecessarily lofty – Fischer’s address is nothing if not graceful and intimate, posing these questions about language, time and causality through a personal turn. For ‘paths of flight’ also implies a travelling itinerary; the collection maps a topography of a young cosmopolitan speaker, tracing snowdrops in West Philadelphia to early spring in Hamburg. The matter-of-factness of a Paddington morning, ‘a freckle blemishing her even tan,’ is set against the expanse of ‘Syrian Desert,’ where the totemic speaker and observed man appear ‘cloaked in the winds.’ I couldn’t say that the collection is Eurocentric, but there is a longing for Europe across this collection that is likely linked with Fischer’s Eastern European heritage, as well as his recent academic postings in Germany. Australia is rendered in contrasting tones of bare familiarity. There is a sort of blankness that the speaker alludes to in ‘Twilight’: ‘Like children/ we hold no beliefs.’ Consistent with the book’s theme, the birds deliver a sign:

Such a sentiment not only speaks of longing for elsewhere, but also speaks of the ambivalence of the cosmopolitan wanderer, who finds home precisely in mobility and rootlessness. Non-fixity reaches its joyful apex in ‘Lexcial Synthesis 101,’ where trees walk and travel on planes. The privileging of the path, or the space ‘in-between’ is showcased in ‘Swift,’ which, in a turn reminiscent of Derek Walcott, celebrates flight as a liberation from earthly history:

The speaker ironically finds this emblem of mobility, ‘awkward on land as a seal.’ The swift is nursed, restored and released to the winds. The poem closes on an apposite note of ambivalence, with the speaker left wondering ‘whether you reached the sky,/ or landed helpless in the next field.’

In Paths of Flight the uncertainty of earthly peregrinations is married to anxiety about how words take flight. How do they reach their destination? Is memory the destination? How do we remember what we see, and what we say? Fischer alludes to that fear of the ancients, the winged word, numerous times in the collection. But winged words, and ‘air-writing’ do not signify horrific disappearance or erasure, but rather reveal a world charged with story and signification, an excess of ways to read signs. The reflexive ‘Poem’ shows the poet in a derangement of meaning as he surveys the infinite answers to the question, ‘what is a poem?’ The only relief is tautology: ‘A poem is a poem.’ If not quite a blessing, erasure is surely a kind of concession, as it is in ‘Transcription from the first page of a hermit’s diary (c. 1500): ‘So I speak/ and do not speak/ Even as I write/ my pen/ erases.’

Paths of Flight is a strong first collection, drawn equally from a scholarly depth of influence as from a calm, intuitive knack for scene and story. And Fischer is a strong poet, watching the delicate details of the natural world, gracefully gleaning their abstractions. ‘Augury?’ won the Overland Judith Wright Poetry Prize and appears near the end of the collection, drawing the subtly interrelated themes together. The speaker observes two black birds in flight and simultaneously feels the stir of ‘recurrent doubts about the art/ of poetry, its prospects in our time.’ Fischer’s owl is the key inclusion in this collection of ambivalent augury – the bird that watches the watchers: ‘It’s frontal eyes/ (new moons)/ kept us under watch/ long before we noticed.’ Doubt about the art’s prospects seems ever increasing, yet it remains the task of the poet to read for signs.

This entry was posted in BOOK REVIEWS and tagged Lucy Van, Luke Fischer. Bookmark the permalink.
Lucy Van writes poetry and criticism. Her collection, The Open (Cordite 2021), was longlisted for the Stella Prize, shortlisted for the Mary Gilmore Award, and highly commended in the Anne Elder Award. She is a Senior Research Associate at the University of Melbourne.