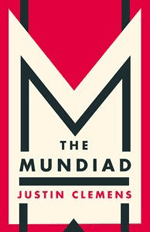 What was mock epic? I use the past tense because the genre is thought to have died in the nineteenth century. According to a recent study by Professor Ritchie Robertson, a Queen’s College fellow and Taylor Professor of the German Language and Literature at Oxford University, mock epic died because epic lost its authoritative status: it was only possible to write a real mock epic in a time ‘when serious epics were being written and read in large numbers, manag[ing] to attain a position of cultural authority remotely comparable to that of Homer, Virgil, or Milton.’1 Mock epic needed something prestigious to mock; when the epic lost its prestige mock epic lost its reason for being.

So what can Justin Clemens mean when he calls The Mundiad a mock epic? While the book displays many features of a traditional mock epic – lowly language and obscenity, supernatural events, invocations to the muse, a preoccupation with sex, great imaginative inventiveness, etc. – it is not really engaged in the anachronistic task of travestying epic. An option is to read it as a mock mock epic: a kind of parodic riposte to this parodic (anti)genre. But this will only deepen the quagmire. What would it mean to mock a mockery, when a mockery – in order to mock pedantry, pomposity, pretentiousness, etc. – must forgo the kind of seriousness that gives mockery purchase? (This is not to say that mock epics are unserious, but that their seriousness is of a different order.) To understand this hilarious and frightening book we need to go further.

The questions become especially pointed if we consider the idea – developed beautifully by J. H. Prynne in a lecture on Charles Olson’s Maximus Poems – that the task of epic poetry is to permit our being at home. By ‘home,’ of course, Prynne means more than the particular spot where one lives. As he sarcastically puts it: ‘You could be at home in some, oh, the ranch back in Kansas, gee, it was great.’2 For Prynne, epic is distinct from lyric poetry in that it can permit our being at home ‘in the larger sense,’3 our being at home on the planet. It takes ‘the whole condition of something called the cosmos into its aim, so that the mere lyric particular can transmute itself.’4 This is epic’s relation to world: including the whole in its scope, it is concerned with locating our place in it; if successful, it should find the (always historically determined) condition for our being at home there. The idea amounts to something more than the ideological notions of homeliness advertised to us in the name of ‘one earth,’ ‘one planet,’ or the ‘global village.’

Indeed Prynne reacts in this 1971 lecture with what now seems surprising revulsion to the photographs of planet earth that were then emerging. He writes: ‘There was that unbelievably gross photograph of the earth taken across the surface of the moon, which is now in all the soap ads, which was supposedly the first picture of earth as home. My god, the stunning alienation of that piece of sentimental whimsy disguised as hatred was unbelievable.’5 More than most, the concept ‘home’ can be subject to the worst manipulations, underwriting, for instance, the vicious sentimentalism that claims ‘everyone is included’ while subjecting certain sections of the population to the most brutal exclusions. For Prynne (who – I have been told by a fairly authoritative source – once slept on Clemens’s floor), only poetry can take us home: no ideology, no technology, no photograph, certainly no advertisement can do it – hence his quoting Heidegger: ‘poetically man dwells on this earth.’6

The Mundiad turns on this, sometimes nearly explicitly.

Take the fourth stanza of Book I:

Mathew Abbott lectures at Federation University Australia. He plays in Life and Limb. His first book of poems, wild inaudible, is available from Australian Poetry.

View all posts by Mathew Abbott on Cordite →